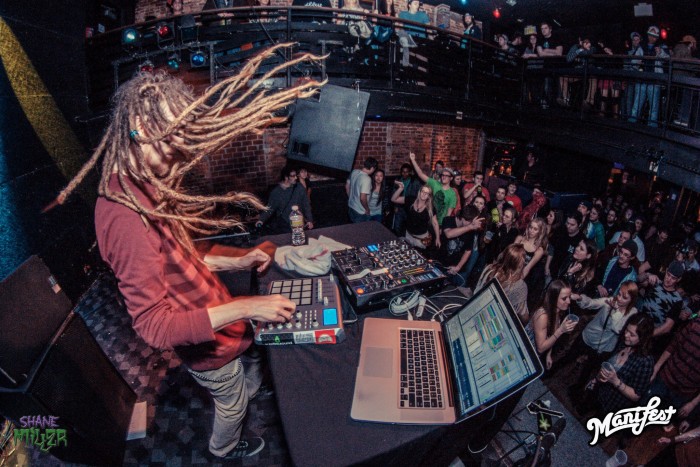 Psymbionic throwing it down in Baltimore, Maryland. Photo – Shane Miller and Psymbionic – Facebook.

Austin, Texas’ wonky bass mastermind John Burcham aka Psymbionic is a force on the rise. With tightly crafted productions and a sound that treads the boundary between glitched-out psychedelia and dirty driving dubstep, Psymbionic’s sonic concoctions have been destroying dance floors for the better part of a decade. Touching on a myriad of genres and styles, the producer’s musical ethos can be summed up in two perfect words: “f*** genres”.

Having played alongside today’s top electronic artists like Bassnectar, STS9, Big Gigantic, Tipper, EOTO, Excision, and more – it’s safe to say that the Psymbionic rests among some highly esteemed company.

With a new album in the works, a label to run, and one of the biggest tour dates imaginable on the horizon, Burcham took time out of his busy schedule to talk tunes in this exclusive interview, check it out below:

Can you tell us about the musical journey that’s brought you to where you are today?

Well it all started when I was born… nah. I’ll sum it up by saying this: I strive to always make something better today than I did yesterday. I think that thirst to grow and learn is a big driving force in my music.

What was the tipping point or moment that you knew you wanted to produce music?

Well, I first started producing in Fruity Loops some 11 years ago in high school. Nothing serious, just some little beats and such. It wasn’t until about 7 years ago that I started to get a bit more serious with it. I had been making psychedelic downtempo type stuff until about 2008/2009 when I started the Psymbionic project.

That’s when I started to discover a lot of these west coast and international folks making glitch hop and weird bass music: Bassnectar, The Glitch Mob, Tipper, Heyoka (Andreilien), Mimosa, Propa Tingz, Bil Bless, Eprom, VibeSquaD, etc. I had the idea of trying to combine the psychedelic-ness of folks like Shpongle and Bluetech that I had been listening to with the increasing amount of dubstep I was being acquainted with. These guys were some of the first people I found who were already doing that.

How would you describe your sound?

It’s mostly blippy noises and trippy bass textures haha. I like to describe it as “multi-genre bass music”, which really doesn’t mean much in this age where there are more genres than ever. I pull inspiration from a lot of different styles: dubstep, glitch hop, trap, future bass, and polkawave, just to name a few.

What inspires your music/what is your writing process like? Is there a set method to the madness or does the process change from track to track?

I usually have a general idea before I begin a track. Lately, I’ve been doing a lot of writing chord progressions + melody on the piano and recording what I write. Then later, I’ll go through and choose which skits I want to turn into full songs.

This is pretty different than the way I used to do things, which was generally writing a bassline and some drums and trying to build a track around that. But, it can vary. Sometimes I’ll just have a bass sound or weird groove in my head that I’ll go and try to create, then make something from that.

What artists, both electronic and non, have you been jamming to lately?

The Mars Volta is what I’m listening to right at the moment. Recently got turned on to Little People. Been digging into a lot of older independent hip hop from the 90s and some R&B/soul from the 80’s lately too. Trying to broaden my horizons.

Can you tell us about your involvement with Gravitas Recordings?

I’m the Label Manager for Gravitas, which means I handle a lot of the day-to-day stuff as well as help shape our growth and direction with my partner and founder, Jesse Brede. We have similar and complimentary skill sets, so really, we each tackle tasks that we are best at which could change from day to day. We both listen to demos and agree on all releases before moving forward with them, which is a system that I think keeps our quality level high on average.

Who are some up-and-comers that we should keep an eye on?

Definitely working with a couple folks who I think will become much more well known in the coming years. Kermode and Esseks come to mind on the future Gravitas release tip. Of The Trees is definitely one to watch over the next few months, his new tunes are extra fire. Space Jesus, Supersillyus, CloZee, Freddy Todd, The Digital Connection, Zebbler Encanti Experience — all folks I’m looking forward to their future output.

Bassnectar recently dropped a remix of your track, “One Thing”, on his Into the Sun album – what was your first reaction when Bassnectar reached out to you for the remix?

Well, the way it came about is that he originally asked to use it in his new mixtape. From my understanding, “Into The Sun” was going to be this crazy mixtape idea that focused on the collection rather than just individual songs. So at first, there wasn’t anything set in stone.

I believe it evolved over time, and probably as he finished up more original music and realized he was ready for an original album, the two ideas merged. So I think when I really began to get excited was after he sent me the first demo of his remix, and asked to feature it on the album.

With the recent announcement of Bassnectar’s NYE 360 event you’ll be joining Nectar, The Glitch Mob, and Paper Diamond out in Birmhingham, AL – what does it feel like to be playing one of the biggest New Year’s parties in the U.S. if not the world?

Honestly, I don’t feel like the full realization has struck me quite yet. Of course I’m extremely excited for the opportunity, but really I have no idea what to expect. The biggest crowds I’ve been in front of have been more like 2 or 3 thousand folks.

The BJCC will hold 17.5k people apparently, where as the previous years in Nashville were more like 12k. I’m very enthusiastic for the challenge, and looking forward to seeing what happens next for sure.

What can we expect from your set, if you’ll divulge any secrets?

Well, my original plan was to play an hour of “Sweet Home Alabama” remixes, but I’m rethinking that at the moment.

Lastly, with so many big things going on right now, what does the future hold for you and your music?

I’m in the process of finishing up a new album which is my first priority at the moment. I’ll be playing some select shows between now and NYE, but mostly trying to lock myself in the studio to finish things I’ve been working on the past 6 months or so. I’m also in the process of developing a live set, which hopefully will be kind of ready to debut all around the same time.

With a massive catalog of original tunes and unbelievable remixes, a slew of insatiable releases dropping via Gravitas Recordings, and one of the biggest New Year’s performances conceivable coming up – get ready to hear more from the psychedelic bass producer as he steamrolls his way through the rest of 2015.

Listen to Psymbionic’s Parallels LP (Parts 1+2) and grab the free download below.