For this week’s installment of the chill out saga, get ready for the heavy hitters, the game changers, and the genre benders. Hopefully, after part 1 of this 2-part mini-series, you’ve dug in to the music contained within and gone a little further down the rabbit hole, finding new artists and tunes to add to the ongoing collection of music in your head. If so, we’re glad you did. If not, welcome to the party!

If you’re into downtempo, chill out, instrumental hip hop, trip hop, or anything in between – here are 5 tasty tracks and corresponding artists to satisfy the continual hunger in your ears.

Even if you’re not a fan, or have never heard of the genre, we’re glad you’re here and we’re absolutely psyched to send 5 more artists your way! For this round, the artists and tracks included are the staples, the classics, and the benchmarks of the downtempo sound.

Ranging from the upbeat energy of Tycho’s tunes to the surrealist soundscapes of Random Rab, this chapter should serve as an (albeit very limited) expedition into some of the deep space corners and nebulas of the ever changing downtempo scene. But, enough talk, that’s not what you’re here for. So, without further adieu, all aboard the downtempo train! 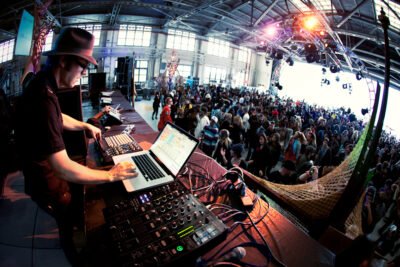 Random Rab at his best. Photo via Facebook/Random Rab.

The easiest and perhaps most fitting way to describe Rab’s music is, well, heavenly. His true genre? Sonic shamanism comes to mind, if such a genre existed. Blissful, hypnotic beats set against lulling textures of warped vocals and organic instrumentation, Rab easily has one of the more unique sounds in EDM today.

Contemplative and soothing, yet strange and visceral, it’s tough not to let yourself fall into a dream state whilst listening.

His tunes are indescribable; incredible before bed, during meditation, and while feeling… how shall we say… uplifted… if you catch my drift.

With 7 album and EP releases to date, Rab has been blazing a trail the electronic world for 15+ years, and he’s showing no signs of slowing down. His 2014 body of work, Release, showcases Rab at the top of his game – expanding his take on music to cover more ground without alienating his previous work. While still definitively Rab, Release branches out and dives into other elements of downtempo electronic music. In the end, it’s all for the listener’s pleasure. 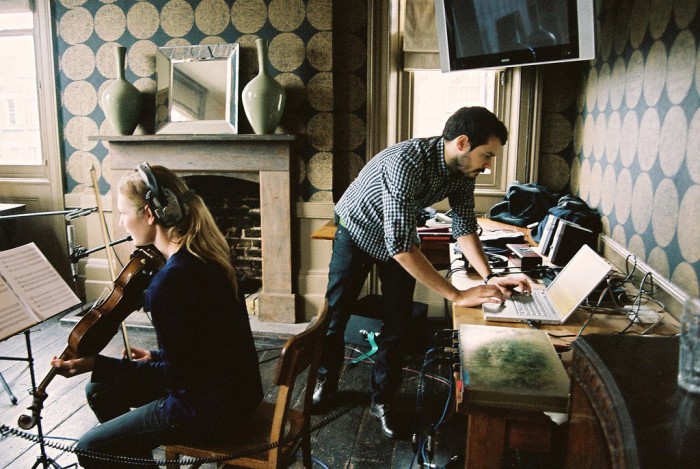 Swiss born producer, Laurent Clerc, is a man of many things.

A musician and producer extraordinaire; the musical tour-de-force creates soundtracks and soundscapes to theatrical and film releases in addition to his solo work.

With only two full album releases to date, 2006’s Mickey Mouse Operation and 2012’s We Are But Hunks Of Wood, the overall sound of Little People has begun to morph and flow toward a new direction, and we like it.

With the initial release of Mickey Mouse Operation, unified and cohesive album focused on stripping things down to a simpler form. A lot of the focus is breaks things down to just bass, drums, and piano, creating a low-key and primeval sound.

Less trip-hop and more electronica, W.A.B.H.O.W. is difficult to describe, as it is – in fact – many things.

More ambient than his initial release, it explores the smoother side of downtempo. Brooding, yet with plenty of air and space, We Are But Hunks Of Wood sounds like a dream. It ebbs and flows, building and digressing throughout, culminating to make a solid, cohesive piece of work. Deeply reflective and compelling, the album reflects a more harmonious overall view than the Mickey Mouse Operation. If you’re wondering, both are damn good, either way.

With 2+ years of time having elapsed since his last album release, one can only hope for more to come in the near future from Little People. But, with 6 years having elapsed between the previous 2 releases, we may have to wait. Regardless of how much time it takes, though, something on the horizon pushes toward the idea that no matter how long the wait, it will be worth it.

P.S. Little People released a set of FREE ABLETON PACKS from We Are But Hunks Of Wood, for all of you producers out there, you can snag them here.

If Explosions In The Sky and Boards of Canada got together and made an immaculate music-baby, Tycho might just be the result. Representing the brighter side of the downtempo spectrum, Tycho dives (pun intended) headfirst into bliss inducing sonic textures and uptempo dance beats for his musical catalog. 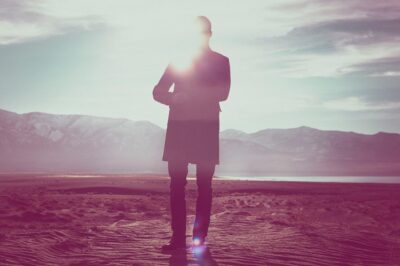 Scott Hansen, the originator or Tycho. Photo via Facebook/Tycho.

Tycho sounds childlike, but only in the best sense of the word.

Peaceful, heavenly, and idyllic – reminiscent of a romp in the rain, a first kiss, the sunset on a perfect day – the music explodes with an uplifting vibe that is seldom imitated. Live, Tycho currently plays as a three-piece band, capturing the best of both the organic and electronic worlds.

On one hand, listeners get the depth of the electronic experience, sounds waves manipulated faithfully and gracefully over hours of painstaking production. On the other, live, the group gives off the energy and experience that only a band can emit.

Over the course of Tycho’s last two albums, Dive and Awake, one can see the producer’s growth and progression into his current sound.

Dive, a solo project with a more synthesized and electronic feel, and Awake, with its massive, cathartic, full-band sound. With the newest release, one gets the feeling that the band has come into their own; everything sounds exactly as it seemingly should: full, fluid, and enchanting.

It’s pretty freakin’ good in all honesty. After watching this producer closely for the past few years, we’d be lying if we said we weren’t psyched to see what these guys have in store for us in the future. 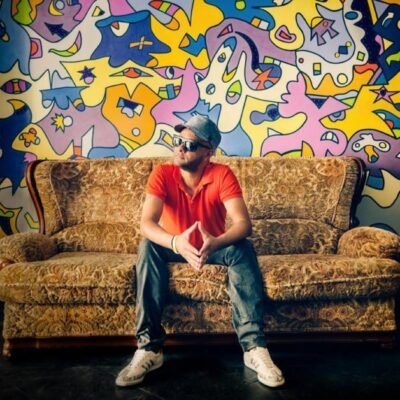 George Evelyn AKA Nightmares on Wax or DJ EASE. Photo via Facebook/Nightmares On Wax.

Nightmares on Wax. A legend. A pioneer. An originator. A bridge. A conduit.

An early proponent of the downtempo trip-hop scene, George Evelyn AKA Nightmares on Wax brings together the disparate sounds from the many different worlds of music, culminating in a sound that we all recognize today.

It’s the pop of a needle set to vinyl. It’s the warmth of a record player. The depth and low end of a massive sound system. It is the amalgamation of all that chilled out beat seekers have come to love.

With sound as deep and heavy as the hanging smoke of an opium den, Nightmares on Wax has been a major player in the trip-hop and downtempo scenes for well over two decades. An early pioneer of the sound, he started out with different roots. Beginning in the early English house and electronic funk movements, he quickly turned his sights to a different path.

5 years in the making, Evelyn released the now classic, Smoker’s Delight, an in-depth foray into the stripped down and funkier side of early downtempo music.

Following up the the success of Smoker’s Delight with subsequent classics like Carboot Soul and 2006’s In a Space Outta Sound, 25 years after his start N.O.W. is still making waves in the music world. Normally a tough catch on American soil (he lives in a farmhouse in Ibiza), Nighmares On Wax has big things in store for the United States this spring. A short tour, featuring 12 U.S. dates and 1 Canadian show, passed through Miami, FL on February 21st and Jacksonville, FL on the 22nd 2015. The Jacksonville show was the stuff of myth and legend.

Rarely does an artist impress and surpass expectations as Nightmares On Wax did that night.

The show was spine tingling and boogie inspiring in every sense of the words. 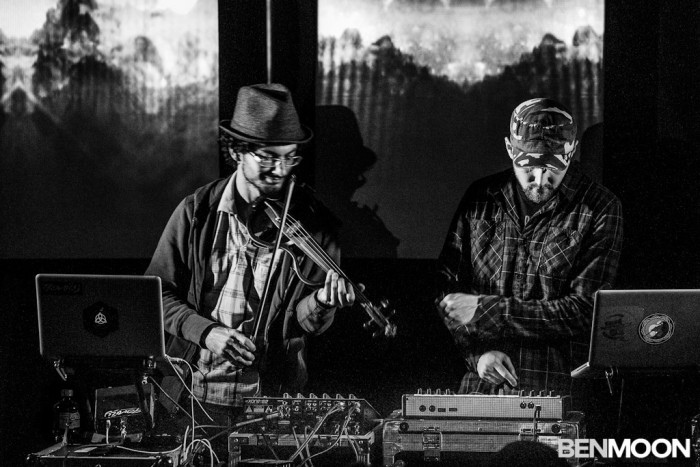 Doug Appling, best known by his stage name, Emancipator, has taken the world by storm since he released his first album under the moniker in 2006. The album, Soon It Will Be Cold Enough, became an immediate classic among instrumental Hip-Hop and Downtempo lovers alike. A chill-out tour de force, Soon it Will be Cold Enough is a breathtaking piece of work.

Deep hip-hop vibe, the ever-present use of violin, soulful vocals, and melodic guitar work; it truly is an awesome accomplishment.

Appling, a multi-instrumentalist, tracks and records a majority of the instrumentals himself. With some of the most delicate production to be found today, Emancipator’s music undeniably focuses first on the groove, wrapping everything else around each track’s essential backbeat. Each meticulously crafted melody is an extension of that central theme or idea of each song, and interviews with Appling confirm this suspicion.

Following up Soon it Will be Cold Enough with two more highly acclaimed albums, Safe In The Steep Cliffs and the more recent Dust To Dawn, one can watch the progression of the noteworthy producer with each subsequent release. Outside of his signature hip-hop vibe, he’s progressed toward a more refined sound, at least from a production standpoint.

Consistently touring with a violinist and sometimes a full band (dubbed the Emancipator Ensemble), Appling’s unique blend of melody and electronica is unparalleled.

We’ll call it Melodica, hell, why not? But really, the music is indescribable except for its sheer beauty. It’s what sunrise sets are made of. What 4 a.m. after a sincere, life-changing, acid trip sounds like. It might just be audible bliss.

Regardless, whether you dance, meditate, sleep, make love, whatever to an Emancipator soundtrack; you’re doing it right. It only adds depth and flavor. Sodo yourself a favor and check this shit out. You won’t be disappointed.

And there you have it, 5 more downtempo artists for your dancin’ soul.

If you liked the artists contained herein and haven’t checked out the first article yet, you can find it here. Hopefully, through these past 2 articles, you’ve gained a deeper understanding and appreciation for downtempo; the beautiful, multifaceted beast that we all now know and love. A true love, running deep into the heart as only few things do.

An incurable itch, only to be satisfied by more exploring, more listening, and more dancing.

That’s all that we can hope for. As musicians and artists pour their souls into their craft, it’s our mission at thatDROP to serve as a conduit to help connect listeners and creators, audience and art; progressing the scene to form bonds and create communities… 21st century creations not linked by physical space but instead by mental congruence. To create something bigger.

Something that we can latch onto and be a part of. Something to love and nurture. To share music is to share love.