It’s been a sad weekend since Swedish DJ Tim Bergling mostly known as Avicii was announced dead on Friday, April 20th at only 28 years old. The Iconic artist was without a doubt someone who helped introduce the electronic music to many fans. Throughout the entire weekend, social media was filled with many sorrows and condolences from many including DJs and celebrities. We have created a playlist of his music to soak up his vibes to commemorate his wonderful life.

Avicii is a legend that will be forever remembered in music’s history.

Many tributes for him were delivered after the news went public. One was Kygo who closed his Coachella set on Friday night with the track “Without You“, by his dear Avicii. Kygo confirmed that he was his “biggest musical inspiration” and “the reason why I started making music.” Tiesto, Steve Aoki, Odesza, Deadmau5, Laidback Luke, DJ Snake, and Skrillex were only a few of thousands of tweets that were posted online sharing thoughts of the young artist. Even after his passing, his personal social media followers increased extensively. 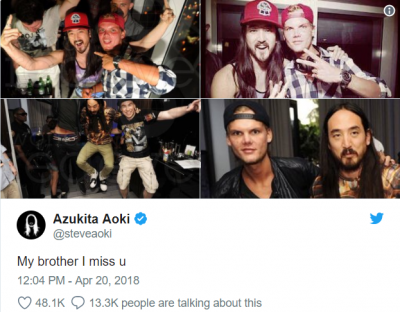 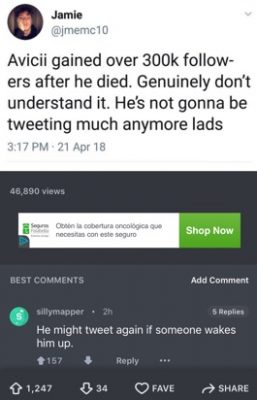 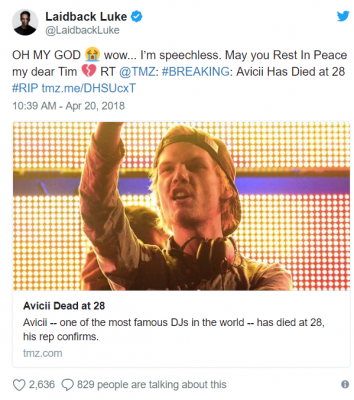 Avicii’s career started when he posted music on Laidback Luke’s Forum in the late 2000’s. This was a platform which feedback is shared between DJs and producers from music that is posted. His track “Levels” broke out in 2011 and became the #1 hit in his home country Sweden and on the US Billboard Dance Club Songs chart. Avicii earned his first Grammy nomination on releasing such masterpiece.

This Grammy nomination was only the first of many which were a reflection of how talented the producer was.

He earned himself another one once he did a collaboration with David Guetta, “Sunshine“ and became the first electronic artist to headline New York City’s storied Radio City Music Hall in the same year. His first studio album, True is what escalated his musical career. The album included his international hit “Wake Me Up” featuring vocals by Aloe Blacc which was #1 hit in numerous of countries and became the #4 on the Billboard Hot 100.

Listen to our playlist to commemorate Tim Bergling.

Two years later he released his second album Stories and featured collaborations with Gavin DeGraw, Chris Martin, Robbie Williams, Wyclef Jean and many more. 2016 was the year Avicii decided to retire with a sentimental letter to his fans. He made it clear to the media that it wasn’t the music or shows but everything else that came along with this career. He was not like many others who enjoy the spotlight. Avicii confirmed he was an introvert and didn’t care about the fame.

Avicci had been suffering from health problems before he retired. He had suffered from acute pancreatitis in 2014 and had his appendix and gallbladder removed. Facing major health problems, he still left a reputable imprint in the music world. With awards from MTV, Billboard, and the Grammies, Avicii was referred to being one of the most successful and popular EDM DJs of all time

Watch one of Avicii’s last live sets at Ultra Music Festival in 2016: