Is Georgia Still on Your Mind? A Look Back at CounterPoint Music Festival 2014

Georgia on my mind. The timeless Ray Charles ballad perfectly echoes the sentiment of the thousands of members of the fest fam that descended upon the rolling hills of Kingston Downs in Rome, Georgia this past weekend for what will live in the legend of music festival lore for years to come. 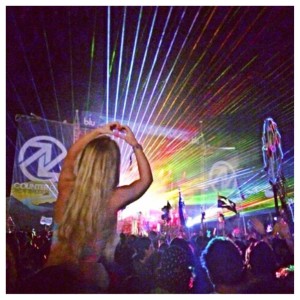 From arrival to departure, and every moment that comprised the space in between, high fives and hugs were exchanged, unbreakable bonds were formed, ridiculously incomprehensible banter was exchanged, and sounds were poured directly in to the earholes of everyone in attendance. Even when the storm clouds rolled in and put a delay on the music for a short period time on Saturday afternoon, laughter and good vibes were still protruding through the atmosphere as people continued exchanging stories and rejoicing in their love of all things music.

Festival organizers could not have picked a better venue. The picturesque rolling hills blended in to the valleys below where the sun could be seen rising and fading in to the darkness at the turn of every day. Once the lights were out the stars illuminated the night sky as lasers penetrated the surrounding forests and bass rattled the ground for miles surrounding the area (sorry locals).

On to Friday madness