The City Hearts Festival set times for this weekend in Downtown Los Angeles have just been released, revealing unbelieveable B2B sets and closing sets coming from Tiga and Patrick Topping. The festival, which hasn’t touched down in LA since 2017, has expanded to two days for the first time ever and will be the largest Desert Hearts event since the label’s flagship festival in April. The lineup is stacked with favorites from the DH family, including Rybo, Lubelski, Doc Martin, and Andreas Henneberg, who is set to go B2B with Desert Hearts co-founder Mikey Lion. 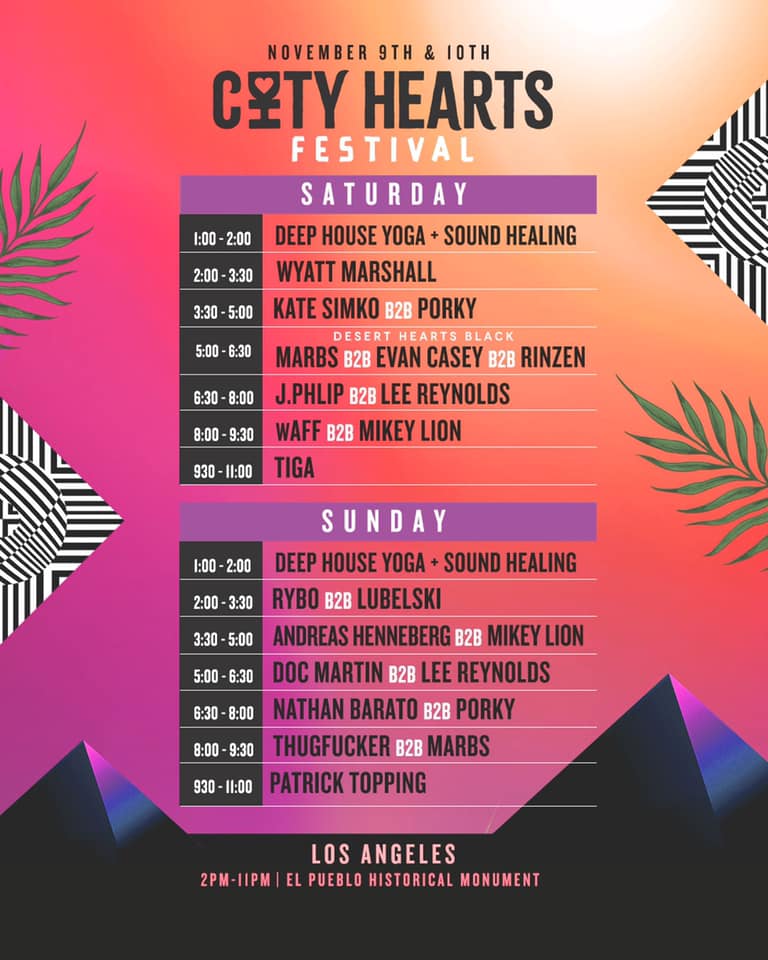 The Desert Hearts crew have a message for the occasion:

Each of our core Desert Hearts Crew picked one of our favorite artists to go back to back with each day in order to create a lineup you’ve never seen anywhere else. You can expect completely different sets each day but rooted in the same DH vibe you know and love.

Saturday at 5pm will be set aside for a Desert Hearts Black showcase with Marbs, Evan Casey, and Rinzen sharing the decks. The dynamics of that set will be next level.  Marbs and Evan Casey first leaked DH Black during a 4 hour set at Desert Hearts festival this year. Little did we know what would develop… Sample the trios collaboration ‘Torus’ that minted the label this August 8th.

Rybo and Lubelski will kick things off Sunday with some funky daytime sounds, followed by two absolutely can’t-miss sets: Andreas Henneberg B2B Mikey Lion and Doc Martin B2B Lee Reynolds. Then darker sounds from Thugfucker B2B Marbs are likely to emerge as the night falls. The perverbial cherry-on-top, to end the Los Angeles affair will suitably be Patrick Topping.

City Hearts is set to take place at El Pueblo Historic Monument, which boasts a fantastic view of LA’s iconic Union Station. As with all occasions under the Desert Hearts flag, people will be welcomed into an immersive experience, full of art that expresses people’s wildest imaginations. 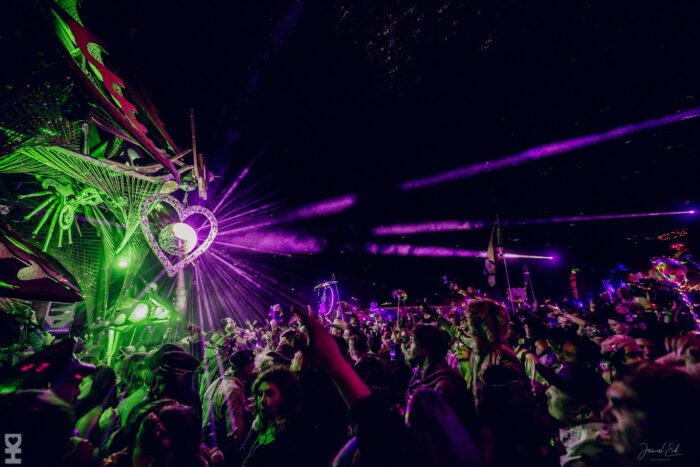 If you are wondering what to wear, take note from this guy… 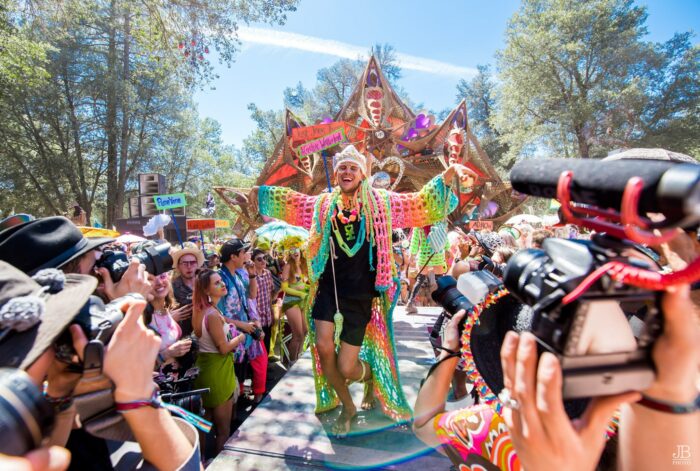 Anyone that has attended a Desert Hearts event in the past knows their events are unlike any other in the world. Their “one stage, one vibe” mindset sends a feeling of oneness throughout the crowd so the dance floor becomes a unified place. The synced up vibes amoung all the attendees creates a real harmony that keeps people coming back.

In true Desert Hearts fashion of adhering to the utmost level of inclusivity, City Hearts was created to reunite the DH family in locations around the country. In previous years the event has landed in San Francisco, Las Vegas, Miami, and Seattle, among others. City Hearts has given fans who are unable to make Desert Hearts out at the reservation each year the chance to feel the magic. 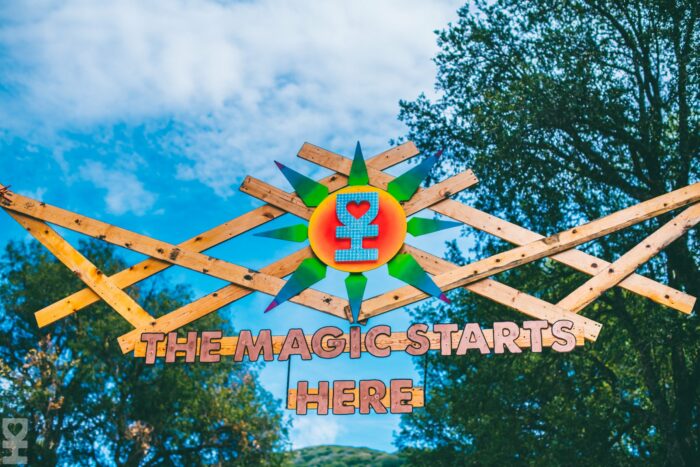 Similar to the main festival there will be deep house yoga. art installations, live artists, food & craft vendors, and their Desert Hearts’ touch.

Start each day by getting those chakras in line with a deep house yoga session. A wise man once said, “never start a day of dancing without a solid hip-opener.” Then be ready for 8 plus hours of dancing each day, and the dancing is surely not going to stop at 11pm when the park sessions end… Have fun discovering what the Desert Hearts community has awaiting for your good vibes. 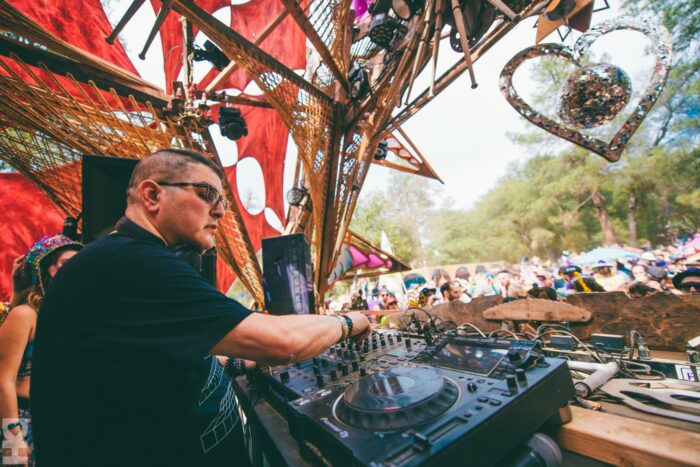 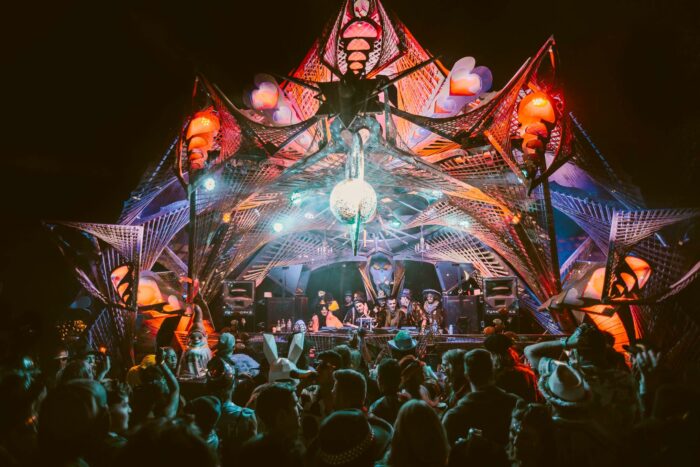 Marbs will be starting the weekend off tonight at Fulton 55 in Fresno and tickets for City Hearts are still available. The festival will be donating a portion of proceeds to their Helping Hearts foundation. Helping Hearts is an organization that donates bulk backpacks full of essentials like tissues, bandaids, body wash, deodorant, toothbrushes, water bottles, and to homeless shelters and communities.

Learn more about Desert Heart from our previous coverage, reading The Desert Hearts story and keeping up with their next moves through their online presence.