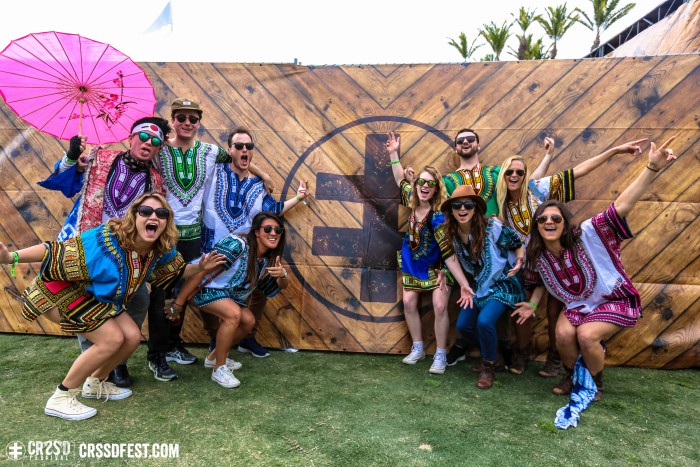 CRSSD Festival came back for it’s third installment on March 5 and 6 in San Diego, California. Boasting an incredible lineup, a great venue, and killer vibes this festival brought it’s A-game, but had a few minor drawbacks.

Despite cold conditions throughout the weekend, CRSSD Festival heated up the Southern California area with great performances across the board. 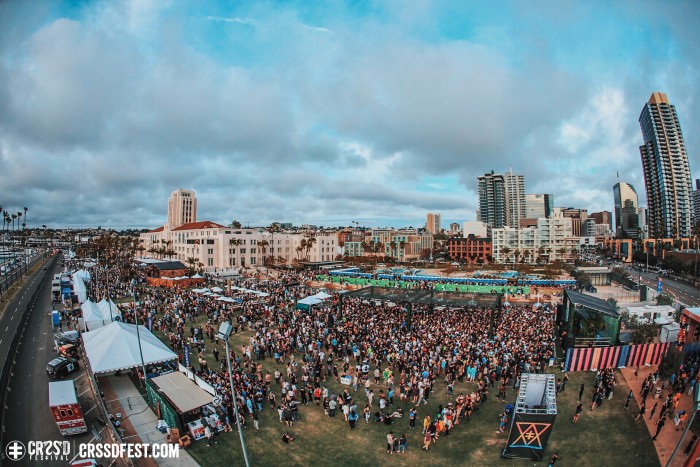 The festival was set in downtown San Diego at the Waterfront Park. Located in the heart of downtown, this public venue features spray fountains, ample space and is set to an incredible backdrop of the city. This venue has been home to CRSSD since it’s inaugural date in March of 2015. Since then, this venue has hosted two additional CRSSD festivals, with this one being the third.

Parking was ample, as there was plenty of parking garages around the venue. However, there was only one entrance/exit to the festival. This caused for a major bottleneck of attendees within the first few hours.

The festival had three stages: The Palms, City Steps, and Ocean View. Upon entry was The Palms stage followed by City Steps and Ocean View, all in a singular line. Plenty of food, drink, and merchandise booths lined the stages on one side, while an open area where the bathrooms and spray fountains were located lined the other side.

Eager to get to the venue, we got there around 1:00pm and walked around, scoping out and getting a general feel. The weather was beautiful and added further to the overall ambiance. We caught a few minutes of Cassian and made our way to Jeremy Olander on City Steps for about 30 minutes and finally ended up at Rezz on Ocean View, which was the main stage.

Our initial reaction was that the sound/speakers were too quiet and a few other people felt the same way. Rezz showcased her unique dark, techno sound that’s generated her such an immense buzz. Not really speaking on the microphone, her overall demeanor really meshed well with the music she makes. 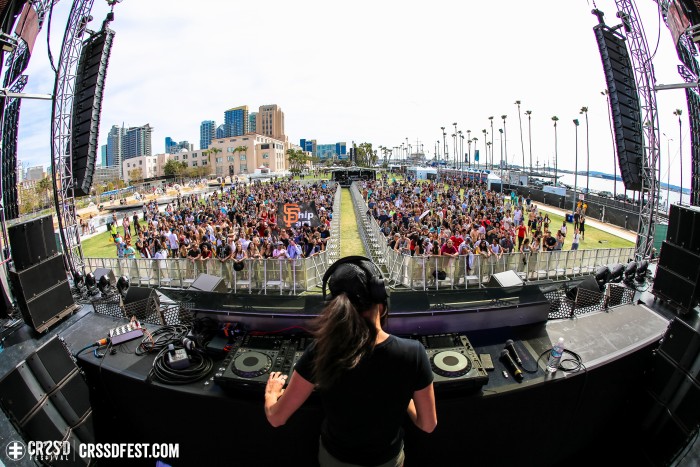 After overall being disappointed by Ocean View’s sound system, but still impressed with Rezz’s set, we took a break for a short while and headed back for Gryffin‘s set. While sound still was not fixed on the stage, Gryffin breezed through his popular hits and even brought out KOLAJ’s main singer to provide vocals for his remix of “Love Me Harder” by Ariana Grande and The Weeknd. Overall, the crowd was not fully engaged, but the speakers being quiet definitely played a part in this.

There was a 30 minute gap in between Gryffin and Ryan Hemsworth on Ocean View, so we perused around and caught a little bit of Lane 8 and Skream at the other two stages. The grounds of the festival were getting more and more crowded around this time and using the bathroom took us around 40 minutes or so. 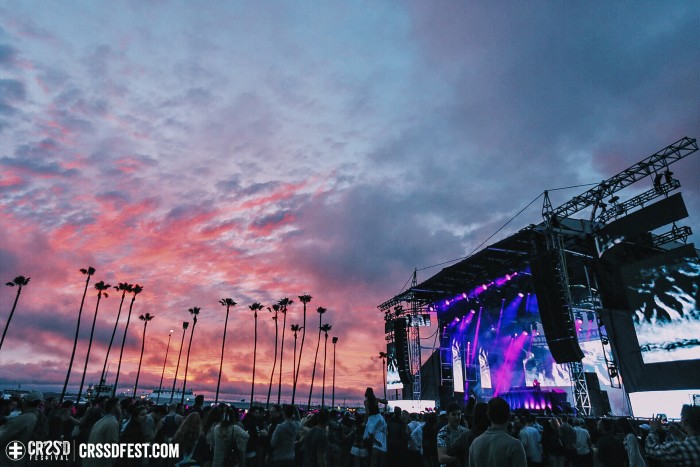 Heading back to Ocean View, we caught Ryan Hemsworth. His future bass, melodic sounds provided the perfect backdrop to the amazing sunset. From there the night really took off. Gesaffelstein really got the crowd engaged with his unique sound. For a generally upbeat and happy festival, it was nice to hear the French DJ’s grimy, dark, and evil songs. Gesaffelstein also provided a huge contrast in comparison to Odesza, who was up next.

Harrison Mills and Clayton Knight, who make up the widely popular Odesza, had the pleasure of closing out Saturday of CRSSD from 9:30-11:00pm. The crowd was massive, which speaks about their following. It was a live set, as they were joined by a someone on the trombone and another person on the guitar. They really put on a show. Equipped with incredible visuals, a set list that flowed effortlessly, and their overall stage presence it was clear why they were closing out day one. If you can catch them at a festival or show, we would highly suggest going! 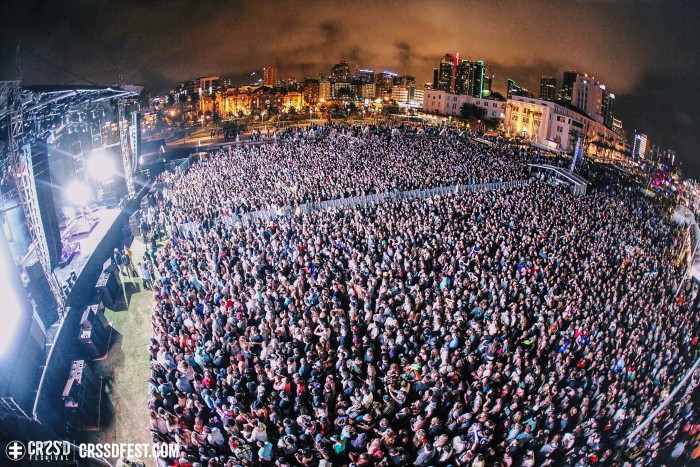 A little worn down from Saturday, we got to the festival later on in the day and the security lines were longer then Saturday.

We made our way to HI-LO, Oliver Heldens’ darker alias, who was playing on Ocean View. The speaker system was tremendously better and you could really tell based on how many people were enjoying his set. HI-LO/Oliver Heldens‘ is no rookie when it comes to playing live shows, offering superb mixing skills and great song choices he was a great way to start the day off.

Green Velvet was the next artist that we were decided to catch on City Steps. Arguably the loudest stage, it was in between The Palms and Ocean View, which made getting into the crowd a little difficult. While we watched from afar, Green Velvet commanded the crowd with his particular tech house sound.

As the sun was setting, Tycho began playing on main stage. Incredibly ambient and chill, paired with the sun setting over the water, it really it put you in a certain space. 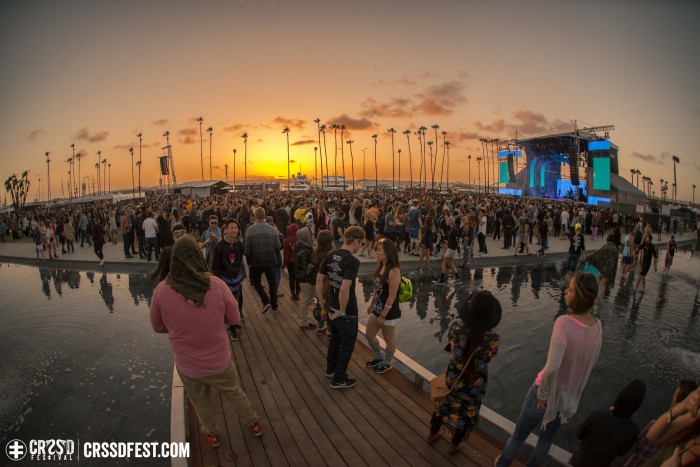 Sunset over Sunday as Tycho began; Photo by Gabe Tiano

After taking a break to deal with the horrendous bathroom wait time, we headed back to Ocean View to witness a Gorgon City live set. Personally, I was not familiar with them at all going into this performance, but they blew me away! Arguably one of the best sets of the weekend, after Odesza. Having two live singers and the three live instrumentalists, they oozed with raw talent. 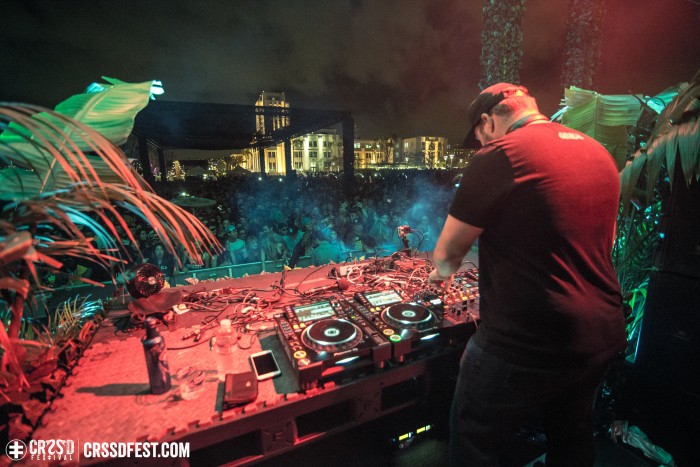 Claude VonStroke closing out CRSSD at The Palms; Photo by Gabe Tiano

The festival was coming to an end and it was between Claude VonStroke at The Palms and Chet Faker on main stage. We decided to start off with Claude and move over to Chet Faker later on in the night. An incredible decision, the Dirtybird head honcho delivered a stunning set that really showcased his sound that Dirtybird is based off of. Chet Faker on the other hand was not up to par compared to the rest of the performers throughout the weekend. Hearing his hits such as “Drop the Game” and “Trouble,” was a great experience, however, his vocals were often quiet compared to the rest of his band.

So there you have it! CRSSD Festival put on another fantastic festival with a marvelous lineup. Other then the Ocean View sound issue that was prevalent in day one, the lack of substantial bathrooms, and the somewhat unorganized entrance this festival would definitely be something I recommend everyone attending.

The general ambiance is phenomenal and the location is great too. They should be back in the Fall for CRSSD October!

Southern California music enthusiast who listens to everything from Dubstep to House to Future. Always up to be introduced to new music, artists, and people. Passionate about everything dance music related and pizza.