All
By James Dutta

Having amassed millions of SoundCloud plays and developing an incredible following within the past few years, it was only time before Gryffin would begin performing live.

New York City native, Dan Griffith, began playing piano from the age of seven. It’s from that time that his love for music began to develop and flourish. Through years of musical training and honing his ear for music, he finally came to formulate his electronic project – Gryffin. Pulling elements from his classical training and combining them with synthesized sounds, he successfully crafted a unique sonic personality that listeners are devouring.

Being immersed in Gryffin’s live show, it’s clear to see why this young producer has experienced so much success.

The Roxy Theater was the perfect venue for Gryffin’s second-ever live show and West Coast debut on Saturday, January 14. Set in the heart of Hollywood, the venue was intimate but allowed plenty of space for listeners despite the show being completely sold out.

Support was provided by the band KOLAJ and Manila Killa, with both acts delivering an astounding performance to set the atmosphere for Gryffin’s headlining performance.

KOLAJ, a relatively new project who describe themselves as “euphorock,” opened the show up in terrific fashion. It’s rare to see a live band perform so closely to their studio-recorded sound, however, KOLAJ delivered that and more, closing with their original song, “The Touch”. The duo already had already been featured on a song with Kaskade and watching them live illustrated why they should be on everyone’s radar in 2016.

Manila Killa succeeded KOLAJ’s astounding performance with his own. At this point, The Roxy, was becoming considerably filled. Manila Killa really got the crowd going with his remixes of “Don’t Speak” by The M Machine and “All I Want” by Dawn Golden, even debuting his first original song, “All That’s Left,” to close out his set.

The Roxy was completely packed by the time Gryffin took the stage; You could feel the anticipation that everyone exerted within the sold out venue. 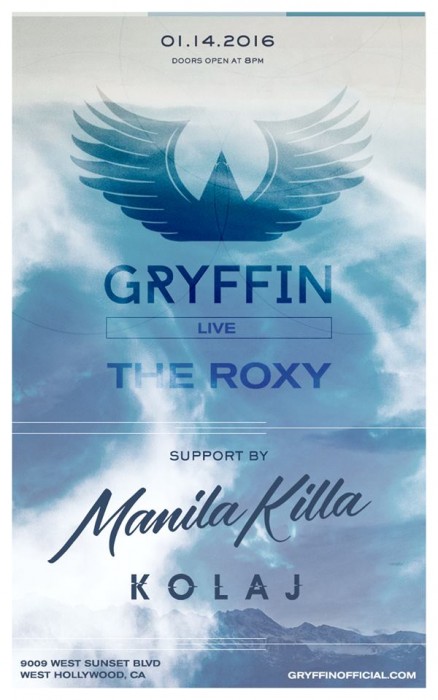 Opening up the show with his remix of “Animals” by Maroon 5, Gryffin played the keyboard to enhance the song even further. Throughout the show Gryffin spanned his entire catalog, introducing popular remixes alongside originals that are still in the works. The multi-instrumentalist switched between drums, guitar and keyboard, exhibiting just how much talent he possesses.

Early on, Gryffin engaged the entire crowd with his very popular remix of BANKS’ “Beggin For a Thread” in collaboration with Hotel Garuda. Almost, if not all of the crowd burst into singing as the song dropped.

During his remix of “Love Me Harder” by Ariana Grande & The Weeknd, he reintroduced the vocalist from KOLAJ, Teesa, who delivered an amazing rendition of Ariana Grande’s vocals to the roaring crowd. These welcomed additions were present throughout the entire performance, including the remix of “King” by Years & Years where Gryffin plucked guitar chords while a violinist supplemented the song even further. This made for an incredible live show rendition of the song.

Gryffin gave the crowd a special preview his originals that to be released in 2016 and, based on the crowd’s reaction, those are going to be massively successful songs that continue to cultivate his following.

I was incredibly blown away by this show. All artists put on exceptional performances and I couldn’t find a moment where the crowd was not fully engaged and singing along to every word.

If you weren’t familiar with Gryffin, now is the time to dive in and check him out. Be sure to connect with Gryffin on Facebook, Twitter, and SoundCloud.

All photography provided by Grayson Walker.

These Are The 10 Highest-Grossing Music Festivals In The World

The spectacle of a music festival is truly something to behold. Access to thousands of attendees in a concentrated area…

Just when you thought Coachella’s 2016 lineup could not get any better, Ice Cube went out revealed he will…