EDM Brand of the Year: How 7UP Has Elevated the Electronic Dance Music Experience

As 2014 comes to an end, we celebrate our first year covering the electronic dance music (EDM) scene.

The reason we began publishing was to highlight exemplary artists, events, and people that positively influence the EDM community. Every moment spent dancing deep into the night has continued motivating us to provide fresh and exciting coverage of the EDM culture and community. From the mountains of British Columbia to the rolling hills of the Southeastern United States, our love of all things EDM has been perpetuated by sharing these music festival experiences with all of you.

In many instances one brand has stood out, establishing itself as part of our community. 7UP has succeeded at going beyond a typical sponsorship, satisfying our insatiable appetite to be entertained while elevating our experience.

For these reasons, we are recognizing 7UP as electronic dance music’s ‘Brand of the Year.’

There are few events that have the capability of changing your life in a single night like an electronic dance music event.

Despite negative portrayals of the community by outsiders, EDM continues to experience a meteoric rise among music genres. The top producers earned $268 million in 2014, up 11% from the previous year, while annual sponsorship spending was projected to surpass 1.34 billion dollars.

Those who have not yet experienced the communal support and resoundingly good time inherent with EDM culture are quick to shoot it down. A quick Google search for the phrase “EDM culture” reveals overwhelmingly negative headlines. Despite the unsubstantiated sensationalism, those of us entrenched within the subculture are privy to the reality of the transformational power of the scene.

There are reasons the community continues to grow; the universal camaraderie, social acceptance, and entertainment value are unprecedented by any institution.

Grammy-nominated producer and icon Kaskade perfectly eloquated the essence of the EDM community in responding to a defamatory article published by the Los Angeles Times in 2013.

As far as a music culture goes, EDM is the one who will accept the kids on the outliers, the ones who get bullied, the ones who feel like they may not quite fit in. This community is exceptional in its ability to bond all types together, and I am not exaggerating when I say it saves lives. Our audience is intelligent and kind, discriminating only in regards to which sound they like best. Our audience is unprecedented in their drive to proactively support each other.

Individuals who have experienced an electronic dance music event can connect with this sentiment.

The inclusive nature of music festivals and their ability to catalyze interpersonal connections appeals to millions around the world. We want to engage with our surroundings and immerse ourselves in experiences that evoke personal relation. Electronic dance music festivals have provided this platform.

Consider that in its fourth year, Electric Daisy Carnival Las Vegas drew an estimated 400,000 attendees while providing a 322.3 million dollar impact to the local economy. A report presented at the International Music Summit in Ibiza further estimated that electronic dance music is a 6.2 billion dollar business and growing every day.

With such significant economic influence, it makes sense that brands are salivating over our community. No where else is a market this desirable served up in such a concentrated manner than at music festivals. Festival attendees are proven consumers; spending money to purchase tickets, travel, pay for lodging, and invest in the experience with music festival fashion and accessories.

UBS analyst John Janedis recognized the importance of what economists refer to as the ‘Millennial Effect.’ Speaking to the IPO of SFX Entertainment in 2013, Janedis wrote:

Electronic dance music (EDM) is one of the most popular music/fastest growing music genres in the world, particularly among the Millennial Generation with a history of 20+ years of mainstream popularity in Europe […] With the loyalty of the fan base, we assume a significant ramp in revenue driven by regional partnerships. Key partners will likely come in the beer, spirits, telecom, tobacco, energy/soft drinks, and consumer electronics categories.

Earlier this year, Eventbrite revealed evidence suggesting EDM enthusiasts are not your typical fans. The study derived compelling statistics that show our community is much more passionate about the music, experience, and events. Whereas general music fans are dedicated to particular artists, EDM fans are concerned with the EDM lifestyle as a whole.

Not only are we consuming media, we have created and sustained a global community with no signs of stagnation. It comes as no surprise that brands are striving to appeal to us.

Companies must appeal to the Millennial Generation in order to survive.

What better way to do so than by aligning with EDM culture?

Millennials are relentlessly unforgiving with blatant promotional content. A negative first impression will dissociate young consumers from adopting a brand, potentially costing thousands of dollars in revenue over the course of a lifetime.

In facing challenges marketing to Millennials, 7UP took advantage of the music festival platform.

According to a 2012 study by Edelman, 80 percent of Millennials want to be entertained by brands while 74 percent believe they can inspire the purchase decisions of peers. Pair this with the finding that 78% of EDM-goers are more likely to attend an event if several friends are going, and the social influence of peers is undeniable.

Where many brands merely existed, 7UP enhanced every experience with their presence, showing that they truly understand and appreciate our lifestyle. Just prior to the summer music festival season, Vice President of Marketing for 7UP, Dave Falk, spoke to the mission of the brand:

We know our Millennials are passionate about electronic music, and we want to help foster a more intimate connection between the fans, the music, and DJs.

No brand has wound itself into the fabric of dance music culture as seamlessly as 7UP.

Launched early in 2014, the year-long 7X7UP campaign has covered all aspects of the EDM lifestyle, from music production to event execution.

Storming onto the electronic dance music scene, 7UP announced the commencement of the crusade in March with their Light It Up promotion.

In just a few short days 7UP took over the streets of Valparaíso, Chile, curating an impromptu performance by Tiësto that illuminated the hillside of the South American metropolis. The short video summary generated curiosity as to what role the beverage company would play in EDM in the coming months.

With world reknowned DJ established as brand ambassador, 7UP simultaneously announced their “Bubbling UP” campaign.

The program has seen the Dutch legend mentor six artists – Danny Avila, The Disco Fries, Dzeko and Torres, Kaaze, Moska, and MOTi – while monitoring the DJs successes through their Tumblr and Tiësto’s In The Booth video series available on YouTube. In addition to elevating the careers of these artists, 7UP gave fans exclusive access to their performances at music festivals across the country.

With stages at Ultra Music Festival, Electric Daisy Carnival Las Vegas, and Hard Day of the Dead, and interactive installations at EDC New York and Orlando, 7UP provided multiple showcases of their featured artists while creating a multi-sensory experience for Ravers.

The first activation saw an intimate stage strategically placed at the center of the Ultra Music Festival grounds.

Though access to the elevated platform required a short wait in line, patience was rewarded with VIP treatment in a house party-esque atmosphere. Beautiful women provided beverage samples as you found yourself within arms reach of the select performers.

Awesome music in a comfortable environment was highlighted by the massive LED tower directly behind the stage, which broadcast video of the performance and branded imagery to the curious crowd below.

In addition to literally elevating the experience, 7UP provided video highlights of the festival at the conclusion of each day.

After the resoundingly successful beta test at UMF, attendees at EDC New York were next to reap the benefits with pulsing environment, bright lights, energizing dance floor, and signature refreshments inside the 7UP dome.

Wasting no time, 7UP took over the famed Terminal 5 in New York City for an exclusive party highlighting Tiësto’s album “A Town Called Paradise.” Celebrating his first album release in five years, the high energy evening was kicked off by the “Bubbling Up” Danny Avila. Additional appearances by Matthew Koma, Icona Pop, and Hardwell ensured that no fan left disappointed.

It makes sense that Insomniac would partner with the thirst-quenching beverage company for the majority of activations throughout their 2014 campaign. CEO Pasquale Rotella and his team have established the industry standard in curating experiences. Explains Rotella:

Any time Insomniac decides to work with new partners we always look at how their involvement can positively impact the overall fan experience at our events. 7UP understands how important our fans are to us, and I’m really excited that they are committed to creating new and exciting elements for our upcoming festivals.

Though this statement expressed the synergy prior to the events, the resulting product redefined what it means to attend an electronic dance music festival.

The 7UP Stage stimulated every sense from numerous angles.

LED walls created a fortress, illuminating the entire crowd while consistently pumping decibels into the ears of those who indulged in this epic experience.

For those that could not attend the sold out event, 7UP connected Ravers worldwide through digital technology that broadcast epic festival footage from over 50 cameras at nine stages as part of EDC Curated.

EDC Curated went well beyond focusing on the music. Powered by 7UP, the showcase gave EDM fans a behind-the-scenes look at performer costumes, parade highlights, art installations, production and more.

After providing artists with a monumental platform to perform and giving fans unprecedented access to all things EDC, the next endeavor was Hard Day of the Dead in Los Angeles, California.

Though not as grandiose as their Las Vegas configuration, the layout at the LA festival aligned with the mature, fashion-forward crowd. Situated at the back of the festival grounds, the 7UP Green Stage created an intimate setting with a warehouse vibe.

Vibrant LED screens outlined the stage, highlighting the performance while the high definition speaker system articulated crisp, sturdy sounds. Throughout the weekend product samples were consistently offered by 7UP brand ambassadors. Those seeking a break from the festivities could readily sample various flavors including 7UP Ten, Diet 7UP, and 7UP Cherry.

The next stop was Electric Daisy Carnival Orlando, the third Insomniac event and final activation of the music festival season.

The 7UP dome was back with all the amenities found at EDC Orlando, providing festival-goers a refreshing escape from the Florida heat.

Whether simply providing beverages or creating awe-inspiring structures, 7UP flourished in the first year of the 7x7UP campaign, optimizing experiences for hundreds of thousands of EDM lovers.

With so many brands vying for the attention of our community, it is 7UP who has won us over with their authenticity and unrivaled showmanship.

The good thing for fans is that this is just the beginning.

The overwhelmingly pleasant presence of 7UP was just the beginning of a multi-year campaign that will continue to see 7UP at the most prestigious dance music events.

Speaking to future goals, Regan Ebert, Senior Vice President of Marketing at 7UP, avowed the desires of the brand:

Consider your mission successful 7UP.

We welcome you to our family with open arms and embrace you as our own. 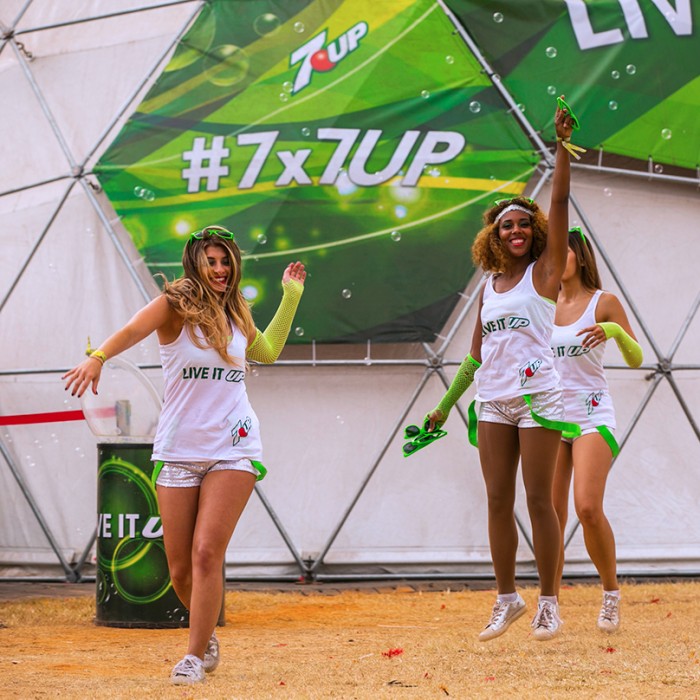 Sonic Bloom: The Unified Field has announced its return to South Park, Colorado. The four day festival will take…

One Response to "EDM Brand of the Year: How 7UP Has Elevated the Electronic Dance Music Experience"