Yheti‘s logo is my first, and so far, only tattoo placed on the back of my leg. Call it an obsession, but Yheti holds a very near and dear place to my heart, for good reason. In my opinion, his sound design is advanced and his dedication to rhythmic melodies that cater to listeners who crave something different sets him apart. 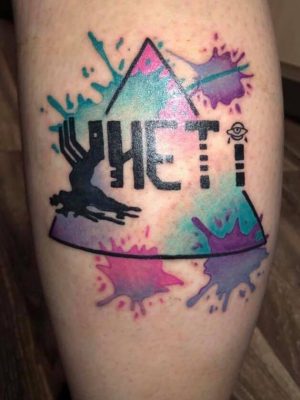 For years I’ve traveled far and wide to see his sets in various atmospheres. Farm on Fire in Ohio is where I was first introduced. Not knowing who he was, I happened to stumble upon his set where I found myself completely captivated.

His music was unlike anything I had heard before. It was unique, technically sound and just plain weird. This moment was the first time I was introduced to what now most refer to as, weird bass. Weird bass is more than a genre, it’s a culture. It’s a culture of like-minded people wanting more than the status quo. Yheti is one of the few bass artists that proves successful in a city that has not grasped the movement towards new sound design. 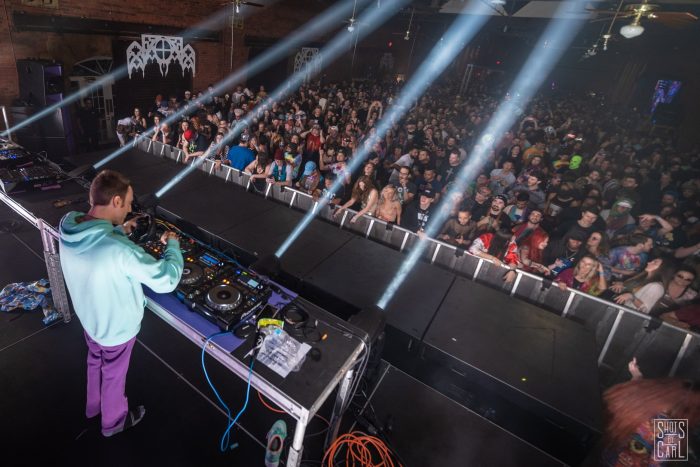 The night’s lineup consisted of a solid bill with up and coming local support. As well as huge names in the bass genre like FRQ NCY and EazyBaked, who have steadily climbed the rankings. While the tour artists were preparing in the green room, local support kicked things off on the proper tone.

The night was young, the bass was loud and Risik came out full speed ahead after Shatter and S.MOSS. Risik, a well known female artist to the Columbus scene, brought an arsenal of gritty bass tracks that fueled the crowd’s energy. She recently came out with her first single ever, “Boring“. The track is a true testament to her passion for raw bass music. I was glad to see she was included on this lineup, considering her music preference is a perfect compliment to the theme of the tour. As usual, she did not disappoint. As much as the crowd loved Risik, we were all ready for the night to truly take off with FRQ NCY.

You may know FRQ NCY from his collaborative EP with Mindset known as “Perplexity“. It received notable compliments from bass music musicians and initiated a full length tour with Mindset. He is relatively new to the world of electronic music, but in a short time span he has pushed boundaries far past expectation. It was no surprise that he was one of the chosen ones to accompany Yheti on tour Deformed. His set was dynamic and intricate in all the right ways. Due to his music that was full of vigor, the stage was prepared for Eazybaked.

Eric Ray and Andrew Principe of Eazybaked are one of my favorite performers in the scene today. They’re diverse and just straight raunchy.

Prominent members of the Lost Dogz crew, Eazybaked knows how to work a crowd through cut throat bass loops that hypnotize the most experienced bass audience. Without delay, they meticulously craft transitions that pack punch after punch of wonky bass lines.

I was incredibly pleased that they came to Columbus after Nasty Nasty was unable to make it. Don’t get me wrong, Nasty Nasty is beyond talented. Eazybaked just has a flow that’s unmatched by most.

At last, Yheti came on as I planted myself among the front of the crowd with anticipation.

Yheti’s music has steadily transformed through the years. He, of course, played many classics. Such as “Crack The Window” and “Pump it up”. Yet, he also took the opportunity to play new tracks that many are anxiously awaiting a release for. He threw down everything from the Deformed EP as well as the “I Love You” Lil B flip. Yheti also sent the crowd into overdrive when he dropped an unreleased track called “Weird Trumpet”. It was pure vibes. As I was surrounded by a crowd of enthusiastic bass faced individuals, I was in an indescribable state of pure bliss.

Watching a crowd of people let all of their fears go for a few hours of happiness is priceless.

This has been the theme at any Yheti show I’ve ever experienced and I have no doubts that it will continue as his career progresses. Your chance to catch Tour Deformed is still alive and well. Also, keep your eye out for Yheti on the festival lineups, like Sonic Bloom and his extended sunrise set a Backwoods at Mulberry Mountain.