Skyler Madison Sets The Dancefloor Off With ‘Slim Thicc’

The Los Angeles based Skyler Madison has been having fun nurturing rooms across the globe with her on-point selection and enticing production. Through an exciting DJ career so far she has tapped into her unique contribution to the electronic music community. 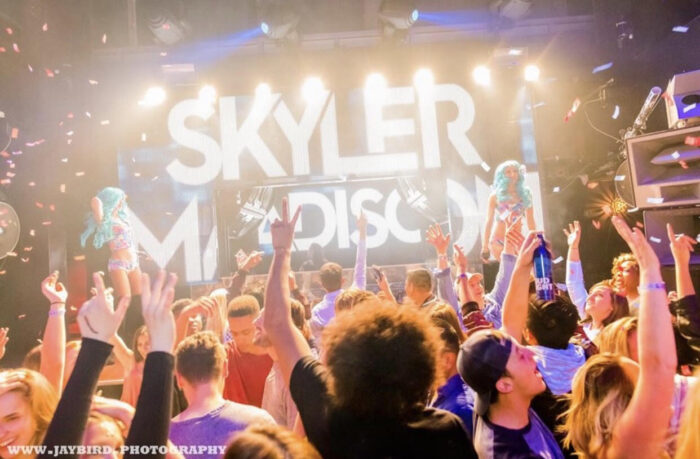 After getting her feet wet in creating music by remixing tracks like Juice WRLD’s – ‘Lean Wit Me’ and Post Malone’s – ‘Enemies’, Skyler is now ready to share her sophomore release with the world. ‘Sim Thicc’ is everything you want out of a trap track. The fresh hook paired with a seducting beat and reverberating bass hits a switch that turns on the dancefloor.

Skyler Madison’s ‘Slim Thicc’ finds its way into your ears via a thatDROP Premiere.

We first found Skyler Madison throwing down at a patio party in Rosarito, Mexico a couple years back.

As she takes the next step in her music career, we had to touch base via an exclusive interview.
See her progression, learn her creative process and discover her future plans while exploring Skyler Madison’s select tracks. You will find she is delving deep into the bass music realm to offer us gems and an atomsphere completely her own.

The last time we connected was in 2018 after your set at Papas & Beer in Mexico. What have you been some highlights in your life and music journey since then? Where has been some of your favorite places to perform?

Wow, it’s really been a while! Since then I’ve been completely rebranding myself and producing a ton of new music. I’ve actually been taking a small break from constant touring just so I have more time to focus on production and my re-brand. Some of my favorite spots I’ve got to perform at to date would include Omnia in San Diego, Beta Nightclub in Dever, Hakkasan Las Vegas, and Papas & Beer in Mexico has still been one of my reigning favorites.

Where can you find the best tacos?

Some of the best authentic tacos I’ve had are actually right down the street from me off of Hollywood Blvd! Te’Kila tacos has been my staple here in LA for a minute, otherwise another close favorite would be Torchy’s Tacos over in Texas.

How did SLIM THICC come together? Who is on the vocals? What samples did you have fun playing with this time?

Slim Thicc was actually a really random idea on my part, I was just browsing through endless Hip Hop songs that had catchy hooks and phrases that I was looking to sample and re-create to throw over an instrumental I was finishing up. Once I came across Fetty Wap’s, ‘Jimmy Choo’ a light bulb immediately went off inside my head when I heard the phrase, “You be lookin slim thick with yo cute ass.” Initially, I tried ripping the sample off the internet, but I hated the quality of how it sounded so I called up my audio engineer who mix and masters most of my tracks and recorded him saying the phrase then it was just a matter of me pitching and manipulating the vocals through various VST’s to get the end result of which you hear today.

Do you have any tips for people just learning to produce music?

I’d say some key pointers in production is patience, practice, keeping the creative juices flowing, and knowing that it’s a never ending learning curve. Some days are harder than others when it comes to overcoming writer’s block, finding inspiration to base ideas off of, as well as well as trying to create your own original sound design. I’m still a fairly new producer and I’m still learning new things on the daily. There’s absolutely no cap on creativity and how weird you want to get with it so never get discouraged.

What have been some of your favorite tracks to mix into your sets lately?

What has been 3 of your favorite sets to witness?

Three of my all time favorite sets that I’ve seen live have been Troyboi at Red Rocks, Alison Wonderland at Imagine Music Fest and RL Grime at EDC Las Vegas.

What’s next for you?

This year I’ve put all gas no brakes into my production and creating a new lane for myself within the electronic dance music community, as well as my overall rebrand. I’ve been aimlessly working on an EP I’m hoping to release this summer. My end goal for this year is to leave my mark in the trap & bass music community so I can continue capitalizing on my brand.

A couple years back, we sat down with San Holo, the man behind ‘Light’ and ‘We Rise’. We are filled…