Mark Knight on Toolroom’s Ibiza Residency, US Tour and More

Toolroom Records has been on tear this summer, from selling out two shows at the 3000 capacity Studio 338 in London to holding down a 17 week residency at Ibiza’s club Eden. With nights packed with the sharpest in the shed, such as David Guetta’s deep-side alias Jack Back, Hannah Wants, Friend Within, Nick Curly, Illyus & Barrientos, Dirty South and of course label head, Grammy-nominated producer Mark Knight, the Toolroom events have created a buzz felt across the pond.

Luckily for us house and techno hungry Westerners, Toolroom is bringing their love Stateside for a revolutionary autumn tour.

Mark Knight, Leftwing : Kody, Wheats, Alex Sibley are the protagonists for the Toolroom US events thus far. Further artists and dates will be announced over the coming weeks, with SF Mint Open Air Patio, Sound Bar Chicago, Analogue Brooklyn and Exchange Los Angeles already confirmed as hosting events starting September 7th to November 23rd. To get a taste of what is to come, enjoy some select tracks from the featured artists going on tour.

Providing a continuous wave of good vibes there is no wonder how Toolroom remains at the top of Beatport’s highest-selling labels. To learn more about what makes these events standout and the Toolroom Records story, we got the pleasure to interview Mark Knight himself.

I never really sit back and reflect on it because you’re always thinking about what you’re going to do next. We were 15 last year which is quite a milestone for an independent label so I suppose that’s a rather big accomplishment; that we’ve been able to maintain in such a difficult time for financially in music and still be around 15 years later. I do remember getting our first licensing request for a compilation though, which was huge at the time – my brother and I were pretty excited at the time!

Our business has always done really well on Beatport which has always been a barometer of our success. To continually to have done so well on that is something that we’re happy with, that statistic is based on facts. Time is very intangible, one minute the label is very en vogue and the next minute they’re not. And we’ve never really tried to worry too much about that, we just look at metrics. And we’ve probably been one of the biggest if not the biggest label on Beatport in the last 15 years and that’s something that I get great satisfaction from: to debut in a global marketplace and be on the top of our game more than 15 years later.

Can you describe the atmosphere you will help curate for the Toolroom US tour?

One of the things that’s been a huge focus for us this year has been the Toolroom Family: both in terms of the artists we have releasing on the label and playing at the parties, and the people who come to our events. We strive to have a friendly, welcoming, ‘family’-like vibe on the dancefloor, and to see the same faces coming back. That’s what we’re trying to build: a community of music fans, and that’s definitely what we’ll be doing on the tour as well.

Looks like you will be having a fun and exciting summer with a Toolroom Residency at Eden Ibiza. Will you be living out there primarily? What is life like on the island for you? How have the Sunday night events been more cutting edge than ever before?

I haven’t been living there, but have been over every week or so, so sometimes it feels like it! This is our first residency back on the island after a bit of a break, and so far it’s massively surpassed our expectations. It obviously takes time to reestablish yourself as a brand especially somewhere as competitive as Ibiza, but the feedback from the fans and DJs has been hugely gratifying. We really wanted to give new talent a platform to play in one of Ibiza’s main clubs, so as well as booking headliners we’ve really focused on acts that are up and coming, people like Sllash and Doppe, Wheats, Siege, Maxinne.

Maxinne especially has absolutely nailed it: she’s playing every party and has done the warm-up, last set, headline slot. And every time she’s been immense. She’s the real deal.

Eden has been the perfect venue for us: it’s without doubt one of the best clubs on the island, and has the perfect dancefloor for really getting stuck in. Some of the clubs in Ibiza have more than half an eye on the VIP experience, and there’s absolutely room for that, but for the Toolroom family I prefer to keep things a bit more stripped down and focused on the music. Eden has been incredibly supportive of the residency: we’re building a long-term relationship with them and I couldn’t be happier about how it’s gone so far.

You just celebrated 15-years with Toolroom last year, you must have witnessed a lot of how the scene has developed. Can you speak on the transformations you have gone through?

Wow, that’s a pretty big question! There have been so many, from the way that music is consumed, to the changes in styles of music, the reduction in barriers to music production and DJing, but I think the most fundamental change is that the scene is bigger and more global than ever before. When I started out DJing 20+ years ago, I didn’t even really see it as a legitimate career. Now its influence across the globe in huge, not just in music: but in popular culture in general. Obviously that growth has presented its own challenges, but I think that for the most part it’s been positive.

Also, how could you see electronic music developing over the next 15 years? Will we all be dancing around with holographic robots in a virtual world or what?

Haha, quite possibly! This is another pretty big question, and I’m not going to pretend to be able to predict trends for the future. One thing that will no doubt continue to have a huge influence on the way music is performed and consumed in the advancement of technology. 20 years ago the idea of being able to stream music from a cloud and DJ using a computer would have seemed utterly ridiculous, so 20 years from now it will be very interesting to see what further advancements have been made.

One thing I hope that happens though is less divisiveness in the industry.

The scene is so big now that regardless of your taste, there’s something for everyone but it does seem as though people are always arguing about the legitimacy of one style of music over another. Social media has definitely made this worse, as people are rarely that competitive when you meet them in person. So maybe my wish would be for less online interactions… but I somehow doubt that will be the case.

What aspects of electronic music do you feel are timeless?

Despite the advancements in streaming parties online and access to music from all round the world, no matter where you are, there’s nothing that even comes close to the feeling of being in the middle of the dancefloor, surrounded by people, all raving to music you love. I can’t see that ever being replaced.

With a month left of the Toolroom Ibiza residency there is still time to make it to Eden for a Sunday with the fam. 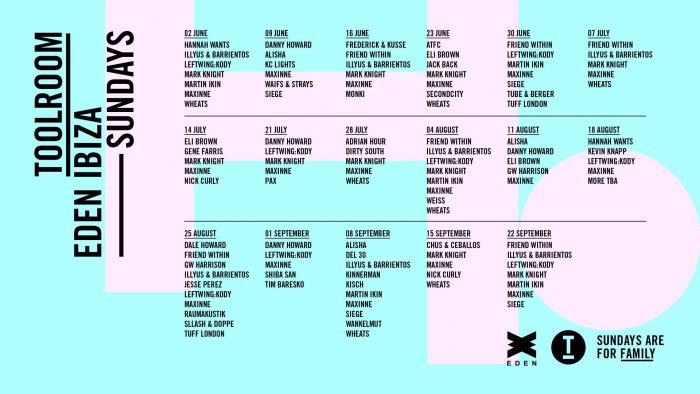 Get to know more about the Toolroom family through this short documentary and keep up with the latest Toolroom tech house releases through the ever evolving playlist below.