Lost Kings, “This is what we’ve been wanting to do from the get-go” on Lost Angeles

Back in 2017, Lost Kings snagged Google Play’s #1 Artist to Watch. Since then, they have created concrete evidence that maybe the internet does know everything. Music such as ‘First Love,’ ‘Stuck,’ and ‘Drunk As Hell’ are some of the many songs contributing to the well-deserved 400 million streams collected worldwide. Live shows at Electric Zoo, Hangout Music Festival, and Life Is Beautiful were once dreams, but are now anchored milestones for the LA-based duo.

Through consistent touring, they have proved that their synth-tastic instrumentals and ambient, emotionally-fraught string of lyrics cannot be restricted by the walls of a recording studio or aux cord. At every show, vibrant lights, drawing smoke, and sparkling streams of fire compliment restless hysteria that builds from the crowd. Recently, they spent some quality time in the studio… 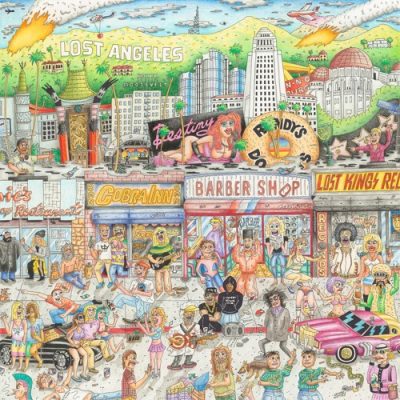 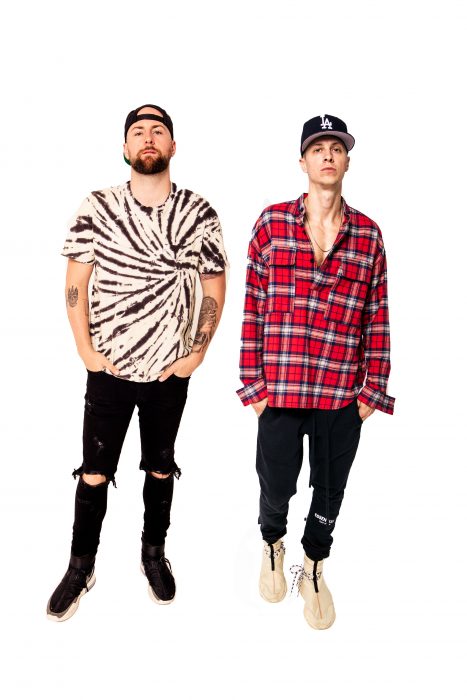 From melodic sound-waves to visual presentation, Lost Angeles is the depiction of life on Hollywood Boulevard.

The story-line is seamless through the entirety of the EP. Throughout songs like ‘LA & The Parties’ and ‘Ain’t The Same’, we get a glimpse of how consuming the LA lifestyle is fun, but can be draining. Sometimes all you need is someone or something real and organic. This time around, the music carries an edge and the tempo is more agile compared to past LK. Clearly, this portrays an evolution. Maybe it’s something in the air or something in the water, but whatever “IT” is Lost Angeles gots it.

In anticiaption for Lost Angeles,  we sat down with Lost Kings at Life Is Beautiful for an exclusive interview.

For those who aren’t familiar with you or your music, introduce yourselves.

Our names are Nick and Rob. [Nick] I grew up in Baltimore. I have been playing music since I was eight years old; I played the drums, guitar, and piano. I moved out to LA about 10 years ago and met Rob about five years ago. I’ll let Rob tell his part… [Rob] I’m from Boston originally and have lived in LA for about eight or nine years now. I was DJing and was interested in learning how to produce. Nick was producing and trying to learn how to DJ, so that’s how things started. We had a mutual friend and they both came to my birthday party. That’s when we really started to talk and we vibed. I think we found that we had a lot of similarities and once we realized that, we sort of decided to do it together. We met, started working, and became friends all in once. It kept growing from there.

So I understand that you guys have a new EP coming out. What are some similarities and differences that avid fans can expect and pick up on compared to your other music?

So the EP is called ‘Lost Angeles’ and basically everything that we’ve been doing, everything we’ve worked on has lead us to this jump.

“This is what we’ve been wanting to do from the get-go.”

It has taken us a bit to get there, but this is really about how we feel living in LA and our experience. Our love life, party experience, everything, is put into this EP. I’m just really proud with what this body of work is. We spent all summer making sure it was perfect. Through all of our touring and travel, we got a lot of inspiration for it. It really tells what Lost Kings is and where we’re going. We’re always trying to keep in unpredictable. Every song has its own vibe and experience. We want people to see where our heart is and we think people can really do that with this.

So you have been releasing some teaser songs to help promote the overall EP. The other day you debuted ‘Ain’t The Same’. There isn’t a music video for that yet. If you guys could completely direct the video for that, what would the storyline be?

I think the biggest thing from this EP is where we live and just LA. Obviously the song takes place in LA. I think it would be laying out that storyline. The lyrics create an image and recalls memories, so I think we could legitimately create a video around the lyrics because they’re so vivid; there’s a lot of imagery. Dating in LA is an interesting thing. I think creating a video with a vibe for the dating scene in LA would make sense.

With dating, I’m sure it’s particularly difficult for you since you both are so well known and successful. It’s probably difficult to find someone truly authentic.

That’s the biggest thing. I think in this industry specifically, there’s a lot of unauthentic people, unauthentic friends, and you never know what people’s motives are. We’ve always had a huge chip on our shoulder and we work really hard. We’re never the ones to put people on blast, but that’s how our lives are. We really take a lot of pride with creating our own story. In our music, we promise a lot of authenticity. A lot of realness and in our shows. We want people to see that.

I want to loop back to you guys always in the studio when you aren’t touring. What is your creative flow when making new music? What kind of environment do you place yourselves in?

We work out of my apartment right now. It’s hard to get a lot of inspiration because we’re not at the same level with a lot of other artists. We get a lot of ideas though while traveling and watching the crowd sing our songs. Seeing the different cultures within the crowd is enough inspiration to go out and create a new album or whatever. It’s the best feeling seeing people sing along to your songs. We would like to have the luxury someday to go out and get other inspirations, but we’re just not there yet. Seeing other artists play, like when we were in Europe, you see what works and try and build from that.

So you guys really try and create music through experience. Would you say it’s easier to write lyrics first then the instrumental?

Well we get the ideas from our experiences, we write them down and then overtime we have collected some really talented song-writers to help fill in the spots. It’s always hard to put your experiences into words, but other people are really good at that. Our background has been more about production and music part of it. We’re definitely involved though in the lyric process, but we’re producers first and writers second. It’s a collaborative effort.

What can you tell fans who feel they can’t be sober to your events or EDM shows in general?

Well with opioids, I have had a lot of friends who have passed away through that and it’s hard. For alcohol, Nick and I, we drink sometimes, but we want to give 110%. We love to get caught up on what’s really happening without an off mind-set. I know people think they can’t go to shows sober, but if you do you can really get caught up in authenticity of it. We want everyone to feel a part of the show and you can do that sober. People may feel alienated if they are sober, but we don’t want you to feel alienated. We want to involve you and have you feel comfortable. Just have fun!

Can we get one message to your fans?

Get ready because we have a lot of new music coming out. We have a tour coming soon so check us out in whatever city you’re in. Thank you so much for listening to us and supporting us.

Don’t miss out on the Lost Angeles Tour