Hailing from Toronto, the trio of Keys N Krates has been throwing down some of the nastiest beats in the game.

Since their hit single ‘Dum Dee Dum’ thrust them in to the spotlight the Canadian natives have been picking up momentum, utilizing their partnership with Dim Mak to expand their reach while continuing to pump out awesome tunes. The latest comes in the form of their 6 track EP Every Night which showcases the progression they have made as producers in just a few short years.

The energy of Keys N Krates is absolutely infectious.

With every performance Jr. Flo, Dave Matisse, and Adam Tune rock the turntables, keyboards, and drums, respectively. These dudes do not stop working from start to finish, throwing down in a way that leaves you impressed at the level of their physical stamina and awestruck by their ‘turnt up’ performances.

We had the chance to speak with Keys N Krates following TomorrowWorld, discussing their latest EP, North American tour, and more. 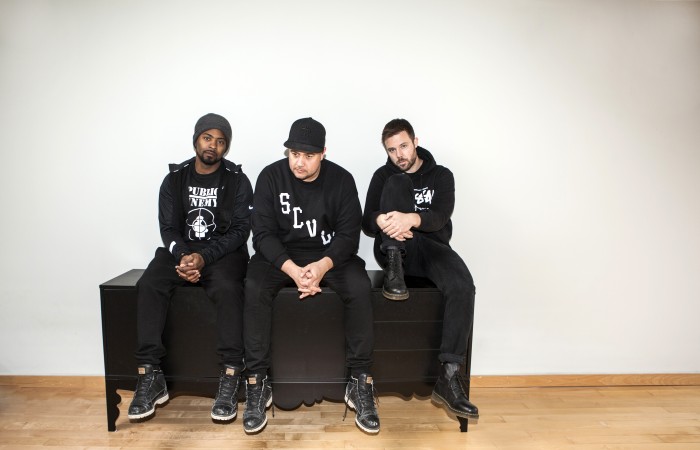 thatDROP: The Every Nite EP is finally out. How does it feel to be able to share that with your fans and how does the response so far measure up to what you expected?

Flo:  It’s great to finally share it because we worked on it so long. We just wanted people to have it.  The reaction has been great and has surpassed our expectations.  It seems to be getting across the board support, and we didn’t totally expect that.

thatDROP:  What does it feel like to have a label like Dim Mak in your corner and how great have they been in helping elevate your career to the next level?

Matisse:  They’ve been great at putting our music in front of the right people and giving it the push it needs.  I think having our music distributed and pushed through iTunes and Beatport has, maybe, legitimized us to people a bit.

thatDROP: Flo, you mentioned a couple months back you wouldn’t mind working with Drake. You got that Toronto connection and you are on everyone’s radar after the release of Every Nite. What is the likelihood of pursuing a collaboration like that?

Flo:  Not sure!  As much as we’d love to work with him and many other artists, it’s not something we spend a ton of time pursuing.  We just do our thing, make music we are excited about and hopefully those opportunities will present themselves one day.  I actually DJ’d Drake when he first started out before we had the Keys N Krates thing going. It’d be really funny to reunite like this.

thatDROP: How do you typically go about seeking out collaborations and choosing which songs to remix?

Tune:  Well for the most part we grab samples, ideas, and source ideas that inspire us individually and present them to the rest of the group. If everyone digs it, we will all work on it until it becomes a beat or a track or we scrap it.   The three of us are always digging for sounds and samples, so it really just comes down to what we get ideas with.  We haven’t done a tone of collaborations yet.  We’ve brought in some vocalists and rappers to sing and rap stuff that we’ve gone back and chopped up to make tracks with.  We haven’t collaborated with a ton of other producers yet, because working amongst the three of us is already enough of a collaboration.
We did collaborate with our producer friend Grandtheft to make that “Keep It 100” tune though.  That was a lot of fun.

thatDROP: What are some destinations, venues, or events on your bucket list?

Flo:  I think we all want to play Coachella and Bonnaroo as well as Madison Square Garden, and hopefully headline Red Rocks.

thatDROP: What have been some of your stand out moments from 2014?

Matisse:  The Mad Decent Block Party in Detroit was one of our favorite shows of the summer.  Also our hometown set at Digital Dreams Festival in Toronto was pretty amazing.
Flo:  I think our EP getting so much heavy support from guys like Hudson Mohawke, Baauer, Machine Drum, What So Not, and other producers that we really respect has been a huge highlight for me.

thatDROP: Just kicked off your Every Night Tour. Aside from returning to Canada, are there any specific stops that stick out to you?

Tune:  L.A. was pretty epic.  We sold out the El Rey in advance that felt pretty monumental for us.  Really excited to go back and play Chicago as well.

thatDROP: What is the funniest thing that has happened to you recently?

Flo:  Probably our new lighting tech.  His name is Hunter and he’s from Oklahoma. His story telling is second to none.  He’s a real character.  You just sort of have to meet him.  He’s also a bad ass on the lasers though.

thatDROP: What are some of the craziest fan encounters you have had in recent years?

Matisse:  We had fans in L.A. come dress up in full mennonite garb to pay tribute to the music video for “DUM DEE DUM.”  That’s pretty insane to us.

thatDROP: We have had the chance to see you guys multiple times this year including Wakarusa and recently at TomorrowWorld. It looked like you guys were a little cozy with your equipment on stage. Did this affect your performance at all?

Flo:  We actually like when we are set up really close together like that because it creates more of a band vibe amongst us.

thatDROP: What song would be the soundtrack to each of your lives?