Kevin Knapp dials into our channel from Berlin this Saturday for a live set for charity. The charity of choice, GiveDirectly, the world’s largest and longest term experiment to date studying the effects of a Universal Basic Income. Now more than ever, GiveDrirectly’s objectives are vital. hence Kevin Knapp will be pushing the gas pedal on vibe for the cause and to bring our community together from around the globe. With strong roots in the house music world, Knapp’s selection consists of Desert Hearts, Dirtybird, Toolroom and TrueSoul releases and house to techno records at the forefront sonic exploration.

By taking a bottom up approach to creating music, Kevin Knapp designs and mixes house music with urgency that grabs the hips and hits the mind. Come Saturday at 3 PM Miami time be nestled up in your rave cave to enjoy the show on thatDROP’s facebook. 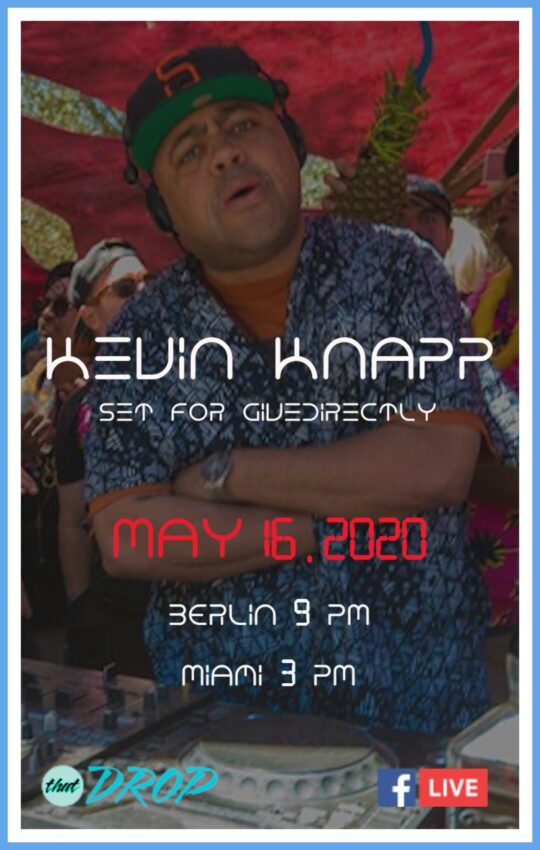 GiveDirectly is the first and the largest nonprofit that lets donors send money directly to the world’s poorest. We believe people living in poverty deserve the dignity to choose for themselves how best to improve their lives, and cash enables that choice. GiveDirectly is leading the world’s largest and longest term experiment to date studying the effects of a Universal Basic Income. We have also given money to refugees and are continuing to build on the success of their pilot test of providing lump sum cash grants at scale.

We’re delivering cash quickly and safely using mobile money to families impacted by COVID-19 in Africa. We’re responding to this crisis by doing what we’ve done for a decade: delivering cash.

Following Kevin’s set you can find a slew of top-tier talent streaming live during EDC Las Vegas Virtual Rave, Desert Hearts TV and more at alldayistream.com. For now, get to know more about what Kev is about by listening to his latest releases, watching his new Beat N’ Eats dining show and reading our recent interview. Most recently Kevin Knapp dropped a couple exciting new originals ‘Cute’ and ‘Funk Police’, a couple spot-on remixes and his buzzing CRSSD Fall 2019 set.

‘Cute’ featuring none other than Baby Luck, is a spunky tune with a thick beat that premiered on Desert Hearts and has already been remixed by Lubelski, Wyatt Marshall and RYBO. ‘Funk Police’ is a Repopular Mars release featuring Toronto’s Nathan Barato that triggers images of a giant alien in your way who won’t let you pass unless you turn on your funk vibe, the beat makes that simple. 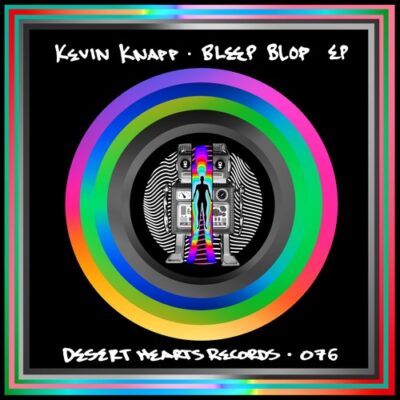 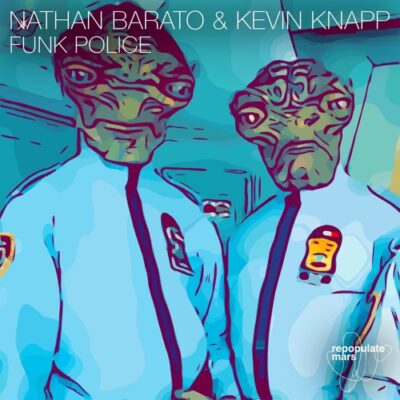 Fresh out of the studio is Knapp’s sharp remix of the beloved Berlin duo, The Glitz‘, ‘Woman’ featuring Fadila via Data Transmission. While last month, Kevin placed his touch on the Ecuadorian Andre Salmon and the Argentinian Steven Joint‘s, ‘Friki’.

The San Francisco raised techno and house DJ teased his project with an appetizer episode of Beat N`Eats last year, and now, Kevin Knapp and his creative partner Mario Münster are launching a new video series on the interplay of house music and global cuisine. Beats N Eats follows the duo across the globe to meet DJ’s, musicians, chefs, and anyone who shared their artistic passion. Enjoy the most recent episode of Beat’s N Eats with Worthy in San Fran.

Last July we asked Kevin Knapp what does house music mean to him, here is his response, then go on to read more of his stories:

House music matters to me for a couple reasons.  I always describe it as the amalgamation of everywhere I’ve ever been/lived/studied/ practiced musically.  It’s got the boom bap of hip hop, the dissonance of indie rock, the crescendo and movement structure of classical at times, as well as many other nuanced historical and contemporary music references.  So, if I’m going to be making a type of music, why would I not be involved in a genre that dabbles in a bit of everything. I am also a firm believer in everyone in life doing what they are interested in and best at.

I have this idealist thought that if we all did that, we would fill all the available jobs in the world and that folks would be a lot happier, and the public efficacy level would be a bit higher. This just happens to be what I’m best at!

Listen to and grab the free download for Kevin Knapp’s Data Transmission Mix:

How is life in Berlin treating you? Where have been your favorite places to play?  What are some tracks have you been dropping lately that make the dance floor blow up?

Life in Berlin is good, my girlfriend and I just finished setting up our new apartment, so we are finally enjoying being settled.   Of course, I took off on tour immediately thereafter but I know it’s waiting for me when I get home. I love playing Kater Blau, it just feels like my home club.  I used to have rooms in San Francisco that felt that way, where you have a great understanding of how they work and what you can get away with in terms of programming.  Kater Blau in Berlin is now that club for me.

As to what tracks have been working for me lately ‘Uh Oh’ from walker & Royce has been killing it for me. My new records Bleep Blop and Worldwide are proving to be formidable records as well.

You just wrapped up a US tour this month hitting Florida, Colorado and California. How did that go?

Just a ton of good vibes, and a bunch of new slammin’ unreleased cuts.  Oh, and shows sprinkled with moments of catching the feels on stage, of course.

You recently released an EP titled, Head Up. Can you give us a little insight on your song writing process? How would you describe this EP in 3 words?

As I always do, I started with a beat loop that continued to pose questions that lacked an answer and then the ass on bottom head on top bit, actually embodies my musical approach.  You gotta grab peeps by the hips and make sure they get down while keeping some edgy, minor key intellectual elements on top. Intrigue the mind and the body. 3 words: Steady Dealin’ Heat.

You have a collaboration with Nathan Barato on Repopulate Mars coming out in November. How did that collaboration come into fruition? Is there a set date we can look out for that track?

I wrote the lyric to that track on stage with Richy Ahmed at EDC Orlando last year.  Nathan and I have been wanting to do something together and I sent it over and bam – the magic happened.  It will be out November 1 on Repop.

Dirtybird Campout, how was that experience? what was your favorite moment? Were there any dance floor shenanigans that you found particularly assuming?

Dirtybird Campout was amazing.   One of the most insane moments for me was actually right when I got on stage because when I arrived the night before I went out for a bit, caught the vibe, and then retired to the camper for a bit to prep some tunes for my set the next day.  The day of the show I found out about 90 minutes before playing that we were all supposed to be across the campgrounds doing a press junket.

Generally speaking, an hour before show is a critical time for me, as I’m finalizing a lot of things in my preset process.  I rushed to make it to the press event, and then went directly to the stage. When I got on stage, I noticed I had not loaded the special folders I’d created of potential go to tracks for the set.

So, I played it as I would any other, off the cuff and pressing the gas pedal on vibe.

I received so much good feedback on the set. Goes to show ya, adaptability continues to be one of the most important skills in this game.

What is your favorite word?

Be on the lookout for the appetizer episode of my new video series Beats ‘N Eats coming out next month in association with Magnetic Magazine.  It’s fire 😉

Listening to music affects your mood. Students listen to songs they can relate to. Here are the top songs for…