‘One hundred percent live and improvised’ is a phrase that’s rarely if ever heard in electronic music… Unless you’re EOTO.

The warped sonic brainchild of Michael Travis and Jason Hann, EOTO is a righteous musical anomaly in today’s music scene. With bass heavy sets that crisscross genres to provide one-of-a-kind experiences at each show that they play, EOTO creates ever-changing, improvised musical conglomerations every time they step on stage. 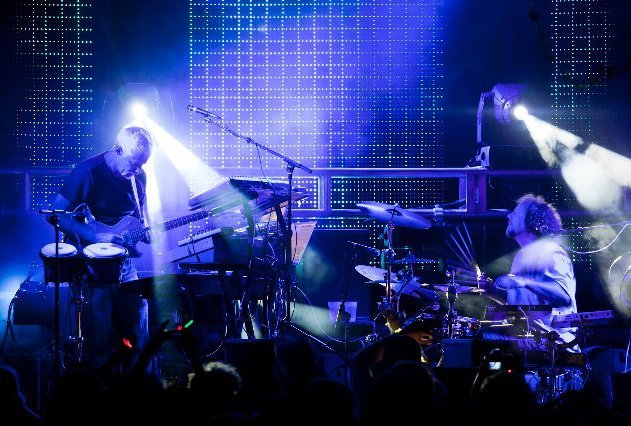 As any musician will tell you, it’s downright difficult and damn near impossible to create and play entire improvised sets, but EOTO takes it in stride by blasting out flawless performances each night.

Creating each and every show from the ground up, EOTO improvises and organically creates every sound and texture live and on the spot during their performances.

No pre-recorded loops, no set list, no plans – just music.

With every show created on the fly, the energy that reverberates and exchanges between artist and audience at EOTO shows is something of an indescribable force. One must feel it personally to truly grasp the experience.

In light of the newest release from their guttural bass squelching live record series, K-Turns & U-Turns, we had the opportunity to ask EOTO drummer and percussionist, Jason Hann, a few questions. This is what we got:

1. Going back a bit for our readers who don’t know EOTO or your background, what was the inspiration behind EOTO? How did everything come about? 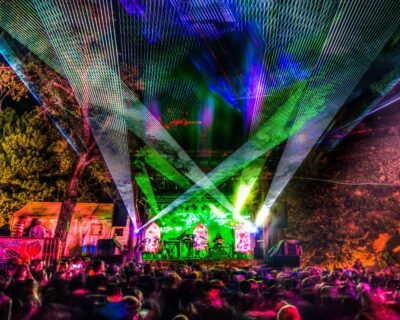 We didn’t intend to put a band together. I would stay at Travis’ place a bunch when I would fly out to CO for String Cheese practice, and he had lots of instruments set up. Our first jams were him playing 6 string bass and me playing drums.

Then he added a looping pedal to that. We would play from 10pm-5am and take breaks to listen to Groove Salad internet radio. Whenever we got back to jamming, we had more fun playing electronic type grooves.

At some point I recommended we use Ableton to step up the fun and control over each loop experience. I had been using Ableton since it’s 2nd version and thought it was perfect for what we were trying to do. Then Travis added a microKORG synth and a guitar and I programmed a MIDI controller and MIDI foot pedal controller for him to use. I started adding a Roland electronic pad and I also added a MIDI foot controller so that I had the ability to loop my parts as well.

We started recording ourselves and listening back to it. Then Jamie Janover (Sonic Bloom/ Zilla) mentioned that we should debut it at the first Sonic Bloom at Mishawaka Amphitheater (Bellvue, CO). That was the time we started thinking of a name, and that would be our official first show.

2. What spurred the idea to create your music 100% live and improvised vs. having written arrangements and music?

We had been jamming on our own from 10pm-5am when we got together and knew that if we just got better at using the controllers, we could probably pull off an all improvised set. It wasn’t much of a stretch. But I can see that anyone trying to do that from the start might have more obstacles to overcome.

We had about one year of not trying to do anything but have fun and be musical, and it was easier to think about extending what we were already doing – which was improvising – rather then start writing songs.

3. What is the main goal for EOTO when you guys step out on stage and what emotion are you trying to bring out of the crowd each and every night?

First is to be as musical as possible within the framework of the DJ styles of music that we’re playing. The audience helps that a lot, because we feed off of their energy and you can feel inside when it just seems like the right thing to do is to pick things up or to put it back down.

Second is, we’re improvising, so try to do something that we haven’t done before. Try different sounds and textures and rhythms and I’ll also try to sing some things at different tempos. If we’re both thinking that way, then the end result will always be something different enough that we couldn’t have pre-planned any better.

4. Coming from String Cheese Incident, which is a far departure from EOTO’s style of music, what are your favorite things about playing with each band, musically? 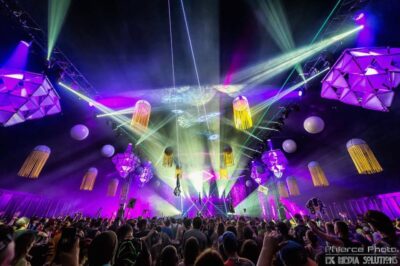 Both bands are very refreshing to dive into after doing either of them for awhile. EOTO makes me play drums mostly with one hand while I’m remixing our sound with iPads on the other and singing. And we play all of these electronic styles of music that each have their own thing about them that makes it a blast to reinterpret with live instruments.

In String Cheese, I play percussion and am surrounded by instruments from around the world – djembe, congas, timbales, dumbek, bongos, pandiero, tama talking drum, korg wavedrum, toms, bells, woodblocks and different percussion textures.Those instruments are such a core part of my musical journey, traveling to different parts of the world to study them. In SCI’s repertoire of music we play such a great variety of styles – bluegrass, funk, rock, latin, African, jazz – so it’s great to dive into all of those styles throughout the course of one night.

5. Touring as part of two wildly successful bands has to be an intense and straining lifestyle at times; do you ever get burned out on the road and, if so, what do you do to recharge while touring?

I don’t get burned out, but there are always lots of challenges to deal with on the road. There’s always way more things to be positive about, so it’s easy to look towards that direction and find inspiration to move forward.

Playing each night to a new crowd every night is an automatic reset button too. Gotta give it all you got whenever you’re performing for the people. They might be taking their little bit of savings to see you that one or couple of times a year. Make it worthy.

6. You guys released K-Turns & U-Turns vol. 7 on May 1st, what was the process like for recording, mixing, and choosing pieces to include on the album? Also, how did the name come about for the live series?

Our archivists Brian Cohn and Heath Byington review and name all of our recorded sets. They listen to everything we do, and we trust them to put a great representative collection of our music together.

The name? Ha. The name came from this kid Eric on YouTube who would do demonstrations of trying to accomplish things while on Salvia. The first of the series is him trying to drive on Salvia. So he explains the type of maneuvering that he’s going to try to accomplish (K turns and U turns) while on it.

He lights the Salvia in the car and within seconds, he drops the keys and sits back and “journeys” – never being able to even start the car. The ending is great as a cat jumps on his windshield. There’s another of him “gardening” and another of him racing Tommy Chong in a obstacle course of tires. Like Salvia verses pot. They are really funny! 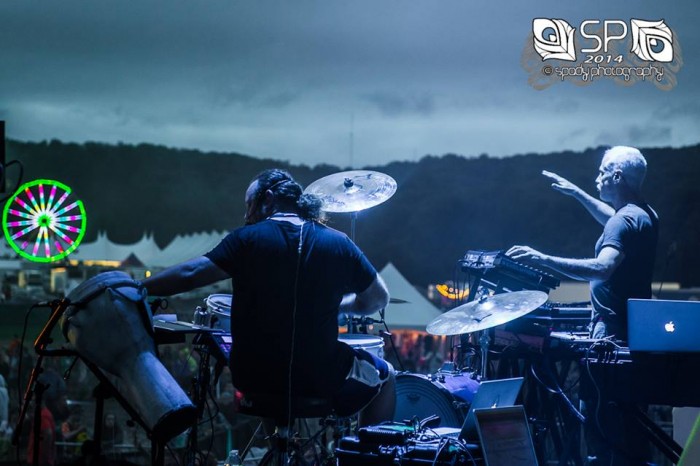 7. EOTO has an upcoming tour from July 9th through September 24th playing massive festivals and more traditional venues alike. Which are your favorite to play and why?

Electric Forest, Shambhala, Summercamp, Envision, Suwannee Hulaween, Wakarusa, Red Rocks Amphitheater, Georgia Theater, The National, The Norva. The Grenada (Lawrence, KS). Too much to write why, but they are all really unique and consistently take care of us the right way and have super fans and super people to make it always a pleasant experience.

8. Side question, who’s at the top of your listening list lately and what do you use (if anything) as inspiration before a set?

For other music: I’ve been listening to Joe Zawinul (1990 and on), Ojos de Brujo, Snarky Puppy, [and] Jacob Collier.

9. If you could collaborate with any musician for an all-out EOTO jam, who would it be?

Any singular musician would probably be Bobby McFerrin with him looping vocal parts. Maybe Bill Frisell or Vernon Reid playing guitar. Cory Henry from Snarky Puppy playing Keys. We’ve had great sit-ins over the years. My dad sat in for a show on guitar in Key Largo and we both agreed that might have been our favorite sit in so far.

10. Looking forward, what does the future have in store for EOTO? Are there new projects that we should know about?

We’re actually going to do a few EOTO and Friends sets… We’ll be doing it at the Werk Out fest and we’ll do a 3-week tour in November with a different guest each week. 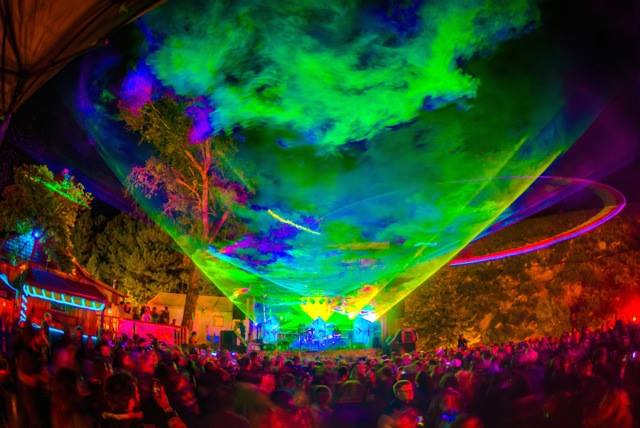 With K-Turns & U-Turns vol. 7 out, a string of massive tour dates underway, and EOTO and Friends sets rapidly approaching on the horizon – EOTO has things in full swing for 2-15.

With a one-of-a-kind sound that changes, morphs, and bends minute to minute and night to night – make sure to check these guys out. They absolutely kill it.