Janet Jaimes
Fly with Illenium as his wings have expanded due to the sounds of his new collection, Awake. Just like the cover photo of the album with wings on fire, Illenium engraved his signature sound, illuminating the entire room with this release.

Awake is a well-crafted album that is profoundly deep which embarks on an emotional journey as you listen.

From the beginning, you are introduced to a radiant, inviting atmosphere through the track called, ‘Needed You’. As it opens up slowly, he still pounds in a future bass drop that reconfirms Illeniums’ sound. He steps into a slower pace with ‘No Time Like Now‘, and ‘Take Me Higher‘, where they make a turn without a drop and carries an instrumental ambience.

As the 13-track trek continues, you recognize heartfelt emotional songs he released earlier in the year like ‘Sound of Walking Away‘, ‘Feel Good‘, ‘Fractures‘, and ‘Crawl Outta Love‘. From tracks like ‘Free Fall‘, ‘Where’d U Go‘, ‘Leaving‘, ‘Lost to Beautiful Creatures‘, they constantly convey a blend of smooth, and actuating beginnings.

Each drop cultivates chills that run straight through your veins.

The last song, ‘Let You Go’ begins with a tempo that is intensely lowered by piano, either way it awes us while escalating a synthesized mellow drop, ending the album tranquilly.

Knowing the entire album craftsmanship was staggering, it couldn’t be done without taking note of the individuals who teamed up with Illenium to create the collection.

Throughout 2017,  he has pleased everyone with announcements that include the album, new tour and gifting us with a Ashes to Ashes 03 mix. It’s been a prime year for him selling out shows throughout the country, including performing at admired festivals like Bonnaroo, Firefly, EDC Las Vegas, Electric Forest, and Electric Zoo.

To continue his journey he embarks on his Awake Tour beginning in November joined by Canadian DJ Dabin, Oregon based duo ECHOS, and Said the Sky. 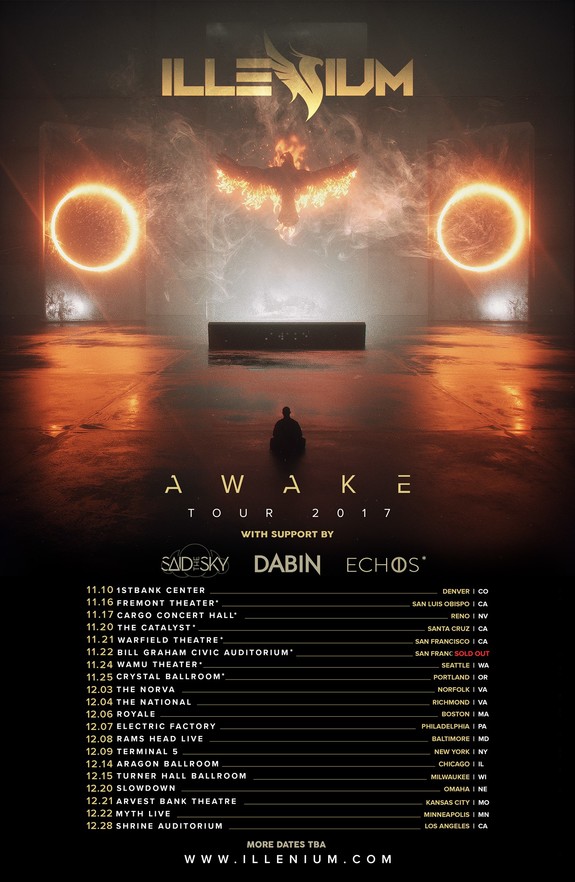