GRiZ and JAUZ Crank it Up to 11 with Bangers[6].zip Opener, ‘No Doubt’

The legendary GRiZ is back at it again with his highly acclaimed Bangers.zip EP series with the latest installment Bangers[6].Zip. Not long after Chasing The Golden Hour Pt. 3, GRiZ brings back his signature wobbles and funky wubs, and in pure GRiZ fashion, keeps the good times rolling. This 3-track EP brings explosive collabs and colorful melodies to his already impressive discography.

Today, GRiZ released the sixth installment of his Bangers.Zip EP series, this time, on Zeds Dead‘s highly acclaimed DeadBeats label. Having already seen the top of the charts with his previous five Bangers.Zip EPs, Bangers[6].Zip just keeps turning up the heat. This new EP opens up with “No Doubt,” a collab that features the incredibly talented JAUZ, serving up a fresh dubstep banger that sways and chugs, punctuated by an iconic, tastefully used sample. 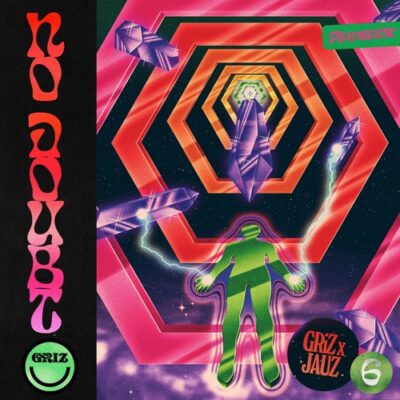 “I saw Jauz tweet about Jakes and Joker’s track “3K Lane” and within a few hours whipped up the start of something, sent it to him, and we finished it over the next few weeks. Was really fun to go back to that initial inspiration for making bass music. Something grimy, swaggy, gutter. Felt like this song is like a lowrider if it could take the form of a car.” – GRiZ

This track combines JAUZ’s unique wobbly distorted bass tones and GRiZ’s groovy melodies. The next track on this GRiZ offering is a long-anticipated collaboration with Blunts & Blondes, the bouncy track “Juicy” combines the smooth-burning stylings that only Blunts & Blondes can conjure with the bouncing energy that GRiZ has perfected to create a track that plays with your every expectation.

The EP closes out with “Brain Fuzz,” a track that brings GRiZ’s signature saxophone sound with guttural bass chugs in this buzzing festival anthem, blending distorted arpeggiators and basslines with emphatic brass horns that make for a smash hit once again.

Following the soul-seeking vibes of Chasing The Golden Hour Pt.3, GRiZ shifts gears back into the sweet dubstep sounds that he is known for in Bangers[6].Zip, flexing his ability to bridge the gap between technical production skills and playfulness in a styling that can only be accomplished by the funkaliscious GRiZ.

With live events on pause for the time being, he’s taken his engaging live shows to the streaming landscape, treating fans to massive virtual sets and intimate moments on stream. Most recently, he produced a two-day virtual event with this third annual Camp Kulabunga, giving fans a chance to connect and find community, self-empowerment, and inclusion in today’s turbulent world. Stay tuned for more new music and virtual appearances from GRiZ.