Sacha Robotti’s year-old Slothacid imprint continues to provide a platform for tomorrow’s talent with another weighty release, this time from the mysterious Eights Everywhere. His two-track acid-tinged “Daemon” EP drops today and kicks off with the eponymous track “Daemon”, a dark, techno cut that is brimming with analogue synth work layered over a rolling groove. 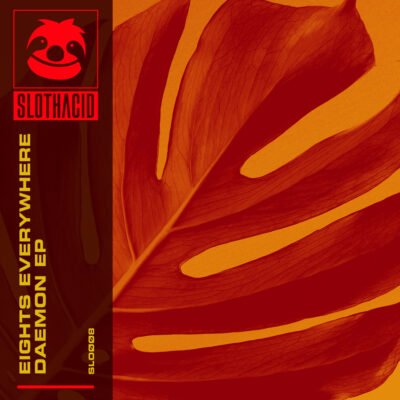 “Daemon exists in the background, unknown to the primary user, somewhere between the infinite and personal perception. Daemon embeds itself in the technology between the quantum mind and human experience.” – Eights Everywhere

Completing the release is “Acid Elbow” which steps things up a gear and is designed to rattle the ears with a low-end bassline dripping in suspense. The track builds and builds until the 303-style acid sounds swoop in as the star of the show, promising to keep clubbers hypnotized to the very last beat.

“Much of the inspiration behind Daemon & Acid Elbow comes from experiences at Burning Man, Desert Hearts, Symbiosis, & Lightning in a Bottle. I think I might have actually first met label boss Sacha at Burning Man after a close friend of mine had said I should connect with him over music. He’s such an approachable down to earth person with a good heart it definitely makes releasing this music under Slothacid feel all that much better.” – Eights Everywhere

“Daemon” EP is out today for socially distant ravers around the globe.