Robotti, whose music career started with a cello at a young age, has previously released music on top labels in the tech-house world including Dirtybird, This Ain’t Bristol, Desert Hearts, and Octopus Recordings. Robotti will now have a chance to pioneer a label of his own and says he is looking forward to exercising a great deal of creative freedom on Slothacid.

“My spectrum of experiences as a globe-trotting sloth will be reflected by Slothacid. The mission of the label is to bring you music between light and darkness, that takes you on a journey,” Robotti says of the label. The “globe-trotting sloth” has played all over the world and DJed in Berlin for over a decade before moving to Los Angeles.

Robotti’s own EP, Welcome to Slothacid, will be the label’s first release on August 30. The first single, “Tail Of A Siren”, is out now. The genre-bending track is an energetic ride with recognizable outer space-like elements of Robotti’s signature sounds but plenty of freshness to excite fans for what’s to come. “It’s a love song from the future with weird distorted vocals that I wrote and sang, on eternal unreciprocated love” says Robotti.

Listen to Tail Of A Siren:


To celebrate the launch of the label, Robotti will embark on the “Welcome to Slothacid” tour, which kicks off September 13 in Detroit. Every show on the fall tour will be an Open To Close Trip with stops in 24 US and Canadian cities. 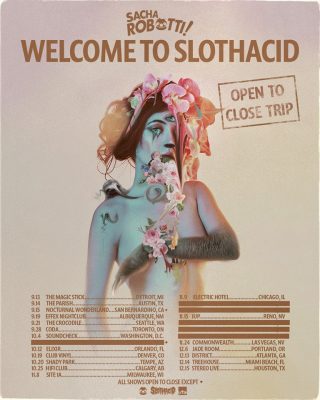 No word on whether the giant stuffed sloths that adorned the clubs at his last round of shows will make an appearance on the upcoming tour. There are several unreleased cities on the tour and according to Robotti there will be “more and more slothy news” released within the next month. Tickets for the tour are available here.

Listen to Sacha Robotti on the Octopus Podcast:

OMNOM Releases ´Number One Fan´ From The Vault [Exclusive Interview]