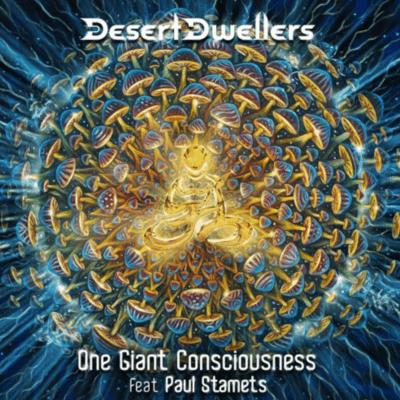 The release ignites the doors of perception with an array of imaginative remixes from producers Hibernation, Nanosphere, Equanimous and Skysia. Desert Trax artists Gumi and Tylepathy also give their compelling revised versions, which further speak to the overall message of interconnection between nature, civilization and the vast network of beings and visionaries lining the corridors of Earth’s rich history.

Tylepathy’s remix is light, airy and tranquil. The soundscape creates a serene, but thought provoking atmosphere that allows one to truly just be in the moment with little to no effort. If simple and placid is what you seek, Tylepathy’s take is just the ticket.

Hibernation is an artist who thrives on complexities mixed with proportionate subtleties. His ability to weave various instrumental basslines with Stamets’ vocal blurbs is truly next level. It’s no surprise that Hibernation showcases his unique sonic pallet through a remix inspired by the sounds and message that nature stands for.

The collaboration between Equanimous and Skysia is a slow, but dominant modification of ‘One Giant Consciousness’. Stamets’ vocals are slow and reverberated to echo the overall meaning. What starts with rhythmic drum beats carefully progresses into various string and trumpet notes. The cohesiveness behind this remix comes through in a clear fashion that makes it well worth the listen.

Nanosphere creates what is perhaps my favorite selection within the project. When drums are predominantly involved in a tune feel free to count me in. More so, the latter moments of the track really get me going with the low end sounds that remind me of the bass genre that we all know and love.

Gumi is a top tier artist on the Desert Trax label. Although, if you’re familiar, I probably don’t have to tell you that. Gumi is a true magician at producing trance like beats that toy with the comforting low end sounds. While he still incorporates the overall soundscape of the original there is something to be said about how this remix is spun in a way that truly speaks to his skillset.

Last but not least, the Desert Dwellers original for the Fantastic Fungi documentary. Desert dwellers is a fan favorite in the psy-bass world for good reason. Their capabilities for taking you to an otherworldly place where consciousness and spirit are plentiful is their most wholesome reason behind their productions. This track is no different. The flow and tempo will truly have you reaching for more during your trip towards mindful tranquility.