BANKS, Jill Banks, is priming for her much-anticipated third album III by releasing her third track “Contaminated”. “Contaminated” follows on the heels of “Look What You’re Doing To Me” (featuring Francis Starlite of Francis And The Lights), and the first teaser “Gimme“. While “Gimme” was an expected return to “pop” form with a stronger sense of maturity, “Look What You’re Doing to Me” was the unexpected – although welcomed – change of sonic texture, and now we arrive at “Contaminated”; the one that her “true” fans have been waiting for.

“Contaminated” creeps in slowly with a filtered piano, and deep groans familiar with BANKS’ style.

It swells to a point to inhale, to then drop us into the verse. BANKS sings here into your ear, as if you were exactly who she was speaking to… “You want to get to know me?” Lyrically, BANKS has always been a strong songwriter. Someone that makes it feel like you are peaking over BANKS’ shoulder into her personal diary. The chorus swells “And I wish I could change it and we’re always going to be contaminated” but the core of song lands hard in the second verse: 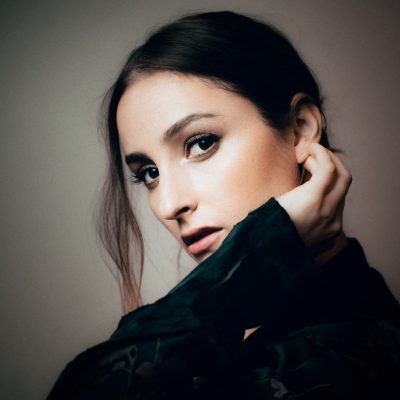 BANKS by Matthew Parri Thomas for The Line Of Best Fit

“You said they’d be against us / I say you care too much what they say / You say do me a favor give me some faith / Cause you promised me you’d do it / You said baby let me prove it / Look at me in the face / This is the face of someone who loves you babe.”

Musically, BANKS has always had a knack of finding producers that envelope you in her allure, and her “smokey wisps”.

BJ Burton nails all the characteristics fans love, and also pushes BANKS’ style further by honoring her piano upbringing reminiscent of her more emotional ballads, while also continuing to elevate the sensual, almost seductive, side. BJ Burton brings some welcomed changes to BANKS’ sound by layering in a slide guitar, earth staggering percussive bass notes, peaking synths that are on the cusp of overload, and plucky mallet-esque melodic notes.

Make sure you listen to BANKS new single “Contaminated” and watch out for her current tour in support of her upcoming album III releasing tomorrow, July 12, 2019.