Above & Beyond Reminds Us What Matters at The Tabernacle [Event Review]

All
By Kelly Boyle

This past weekend, Above & Beyond kick started the second half of their United States We Are All We Need tour in Atlanta, Georgia at the Tabernacle.

With Lane 8 passing the baton onto another member of the Ajunadeep label for the opening act, 16 Bit Lolitas kicked off the night with some undeniably sexy vibes to get the crowd feeling more intimate and ready to groove the night away. The typically deep house duo from the Netherlands had a heavier influence of techno throughout their set, which served as the perfect introduction to the evening ahead.

Not only did Above & Beyond and 16 Bit Lolita’s put on a great show that evening, but they used their music to remind us of what really matters these days as we all strive for happiness. 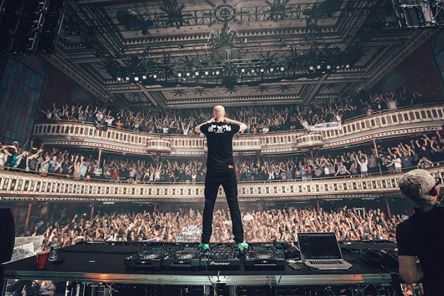 The Tabernacle in Atlanta, Georgia could not have been a better location for such an uplifting event.

The cheerful and accommodating staff provided all attendees of the event with a smile as they entered, and kept the positive vibes flowing all throughout the night.

Originally standing as The Baptist Tabernacle from 1898 to 1994, the interior is absolutely stunning, adorned with recreations of the original plasterwork that has long since diminished over time. The historic venue offered an element of elegance that heavily influenced the tone of the evening.

It may even suffice to say that it offered a heavenly experience to concert-goers.

With a tour referred to as Group Therapy with Above & Beyond, Jono, Tony, and Paavo bring something incredibly important to the table- Love. Countless DJs and producers within the electronic dance music community have whole-heartedly promoted and supported the spread of peace, love, unity and respect, a phrase that has become the mantra of the movement, but these three British DJs have raised the bar to an entirely new level with the emotional connectivity of their performances.

The latest album release from the group has a substantial amount of detail devoted to communicating a message to their listeners.

There has been a great deal of discussion surrounding the idea that electronic dance music is “saving lives,” and the lyrics paired with Above & Beyond’s soothing synths speaks directly to that.

They took this concept even further at their show in Atlanta as they spoke to their fans right then and there through the keyboard connected to the visuals.

This is not a new addition to their shows, as they have done it many times before on tour at concert halls and festivals, but there is something about seeing your favorite DJs speak directly to you as you stand shoulder to shoulder with screaming fans that makes it more special than anything in the world.

Music artists all over the world have fans that love them, but returning that same love is what makes it truly mean something.

What could be more important than including adoring fans?

As always, Above & Beyond chose a member of the ecstatic crowd to come up into the booth and “push the button” as they call it, towards the end of the show.

Much like the verbal connection to fans throughout their show, this is not anything newly applied, but it is still another step above anything you’ll see at anyone elses show.

Above & Beyond returns their love to their fans, and then makes them a part of it all.

In the shows closing, the abstract visuals changed to a slide show of fan photos accompanied by their slower track “On a Good Day,” as they thanked everyone in the concert hall for everything they did to make the night so wonderful.

The touching ending to the already emotional evening held everyone from the ground floor to the top balcony in a magical embrace as we were shown, through a sea of confetti, just how important it is to love each other.

Major Lazer & DJ Snake just came out with their latest collaboration “Lean On” featuring MO, which has become a…

Go get your shinebox before this playlist kicks a mudhole in your afternoon. This electric hamburglar of party trap is…