Continuing his stride into the new decade, London-based artist, Archie Hamilton, has announced his first major international tour across the US, Canada and Mexico; which will run from February 14th through March 24th with more dates to be announced.

Kicking things off in Montreal, the Moscow Records label-boss touches down for several dates in Canada before heading to Miami for the first show of the US portion of the tour. Visiting Los Angeles, San Diego, Phoenix, San Francisco and Chicago along the way, he will also play in Guadalajara on March 5th. Finishing up his tour at the mecca of dance music, Miami Music Week. Archie plays two shows in the city on March 19th and March 21st. 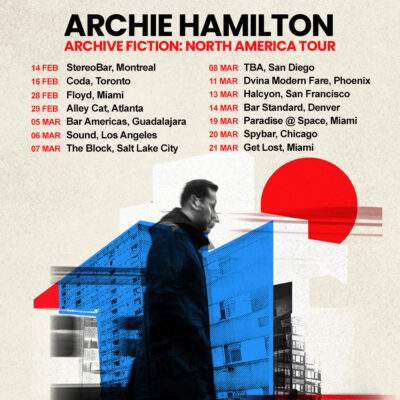 This follows his debut album Archive Fiction released during the summer – a perfectly curated, ten-track LP that blends his musical upbringing with his current tastes, incorporating elements of trip-hop and drum’n’bass alongside deep house, neo jazz, minimal styles and post-90s tech house.

During 2019, Archie featured performances at some of the world’s most recognizable clubs, stages and parties including ADE, the Warehouse Project, Music On, Sonus, Sunwaves and Tobacco Dock, plus a New Year’s Day set at DC-10 for the iconic Ibiza party brand, Circoloco. Gearing up for his biggest year to date, he will also perform at London’s Studio 338, alongside Italian icon Marco Carola and his infamous Music On brand, on 8th February. Consistently breaking down career barriers, this is just the next phase in one of UK dance music’s hardest working individuals. Enjoy his latest releases via Moscow Records to set you day right.

Dillon Francis caught our eye years ago with his collaborated song ‘Coming Over’. Since then he has chef’d up…