Electronic music icon GRiZ has announced the 7th annual ‘12 Days of GRiZMAS’ streaming on Twitch and Zoom December 12-23. GRiZMAS will treat fans around the world to all the performances, activities, and community service initiatives that have made the Detroit event a holiday staple for the city and electronic community. 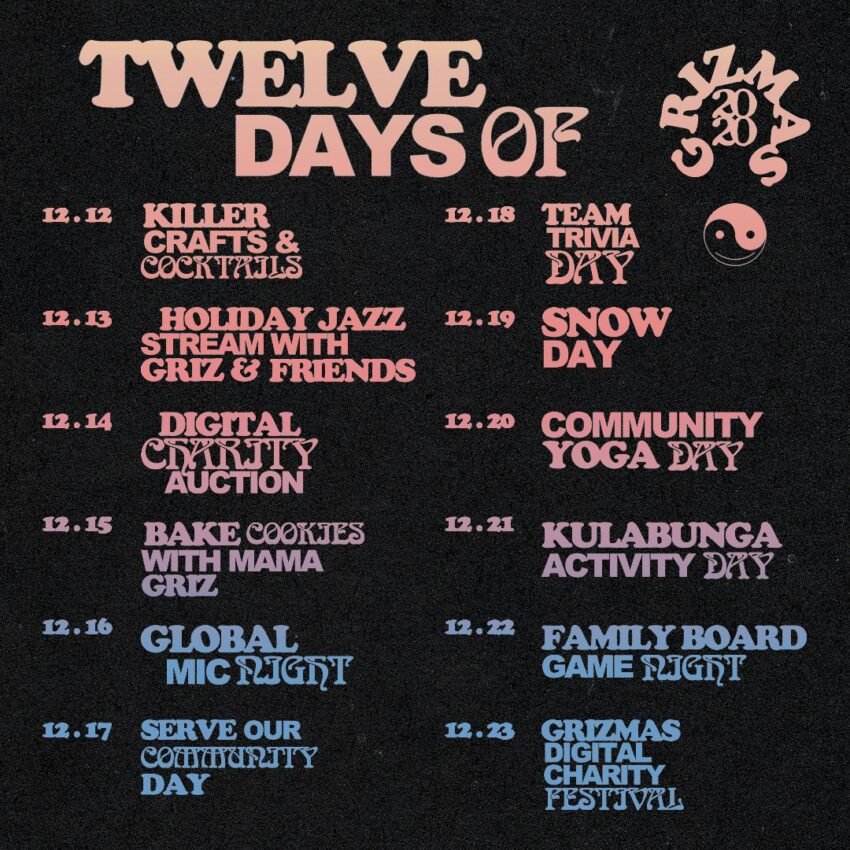 Since 2014, GRiZ’s ‘12 Days of GRiZMAS’ series has made a true impact across Detroit communities, raising over $200,000 in the last two years alone. With Detroit public schools under more pressure than ever there has never been a more important time for GRiZ to support the city that raised him. Together with local non-profit Seven Mile, GRiZMAS aims to raise funds for music education, art programs and coding lessons all of which are vital creative outlets for urban youth.

GRiZ has received the ‘Spirit of Detroit’ award for his work around GRiZMAS, which has been called an ‘utterly sincere community effort’ by The Guardian.

GRiZMAS 2020 will span the gamut of creative outlets near and dear to GRiZ’s heart. On the first day of GRiZMAS, December 12, the Killer Crafts & Cocktails bring a step-by-step holiday drink creation clinic from Standby Detroit mixologists. On the second day of GRiZMAS, GRiZ & Friends bring a special Jazz Stream.

On the third day of GRiZMAS, our true love brings to us with a digital auction featuring up for grabs items like a signed GRiZ saxophone and much more. On the fourth day of GRiZMAS, momma GRiZ divulges a cherished family cookie recipe alongside her son.

The week continues with a day of yoga from Detroit’s own Citizen team, a virtual taste of GRiZ’s Camp Kulabunga, and Family Board Game Night.

GRiZ’s signature coffee will make its return in partnership with The Great Lakes Coffee Roasting Co. Last year, GRiZMAS Coffee was able to draw praise from seasoned baristas tand casual coffee drinker alike, selling thousands of bags with 100% of proceeds going towards music education in Detroit. Moving towards single-origin Ethiopian beans for the 2020 effort, GRiZMAS Coffee will be the highest quality in both value and flavour.

With GRiZMAS’ core ethos of community betterment at the center of everything he does, GRiZ continues his journey as a beacon of positivity both globally and in his own backyard. It is this mission of connectivity and authenticity that has made him one of the most distinguished names in electronic music and beyond. RSVP & Donate to 12 Days of GRiZMAS: www.12daysofgrizmas.com

DQE share on ‘Not A Clue’: “”Not A Clue” started right during quarantine while we were in the midst of…

The Finnish, Axel Thesleff’s popularity has been paced up by his 2014 world release, ‘Bad Karma’. Which has been…