Cooking their music up with jet fuel and flowers is the Los Angeles based duo, Eflorem. Recently emerging from the incubator that is the Berklee College of Music in Boston, Heather Worden and Dewey McManus are truly ready to share their signature bass house with the world. The pair have found an alluring blend of melody and hard hitting four to floor beats that is making dance floors go nuts.

Thus far along their electronic music tale Eflorem has shared the stage with the likes of ill.Gates, Ill-esha and Of The Trees. Beyond their music, as a Post-Production Foley and Sound Design team they have worked with beloved party brands Space Yacht, Mirror House and Deep End Radio, among others. Most recently Eflorem dropped Blast Off, an explosive two track EP via London’s esteemed No Tomorrow Recordings.

The Blast Off EP Will make you feel like you just entered a wormhole to another dimension. Go on a journey with us! – Eflorem

As Eflorem splashes into the scene, get a proper introduction through a thatDROP exclusive interview. 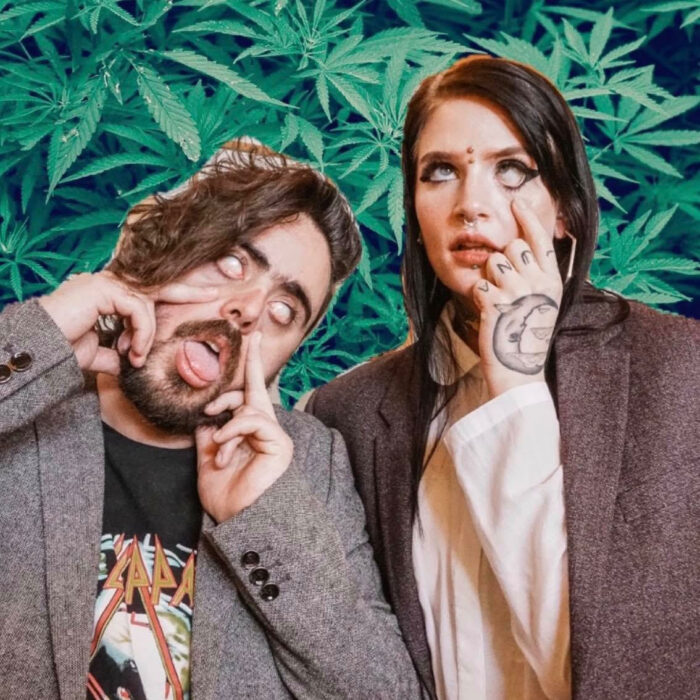 Hows it going tonight? Any plans for the weekend or is there something you guys are excited about in the near future?

We are doing great! Thank you for asking. This weekend will be spent in the studio! We are really excited about a monthly event that we are going to be throwing at Catch One in Los Angeles, starting in February. We will be releasing details about that on our social media very soon, so stay tuned!

What is keeping you busy?

We just finished a track called “Money” which has Scarey Jones rapping on it. We are almost finished with a track that Heather started for her brother who passed away, and it is going to be epic and beautiful.

What is the story of how you two met?

We met at Berklee College of Music in Boston. We both studied electronic production and sound design.

Heather: I was sitting in the school lobby, working on some assignments on my laptop, when I noticed some guy staring at me and pacing the floor. I actually kept giving him mean looks, cause I was thinking “why are you staring at me?”

Dewey: And finally I worked up the nerve to go talk to her, and I just plopped down right next to her, took a deep breath in, rehearsed for the last time what i would say and i just turned and said “Hi, im Dewey” and the rest I guess is history. 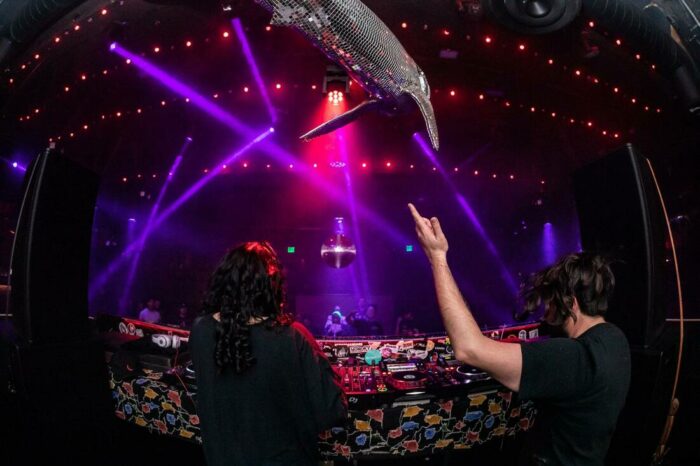 Your Blast Off EP hits hard and is built of all the bass house ingredients to cause chaos on the dance floor. What first drew you to bass house and electro house music? Can you remember where you were, which producer? How does this style of music make you feel?

We started doing bass house while we where living in Boston. We always felt we kind of fell into bass house in a weird kind of way, We started as dubstep producers who love the sound design but found that 4 on the floor beat made us want to move more, so for us Bass House is the perfect combination of dancy beats with hard sounds!

Heather: I remember hearing “Pain” by Magtfuld and being like “WWHHAATT!?!?”. I lost my fucking mind!

Dewey: The first time I heard bass house was not even in a fully bass house track. It was the second half of Getter’s remix of “Get On Up” by Pegboard Nerds. That section of that song forever changed my fucking life.

Especially for your single ‘Escape’ and ‘Event Horizon’, you guys add a very galactic or mystical touch to bass house that really takes the listener on a journey. How would you describe your signature style? How do you feel Eflorem adds to the electronic music scene?

Heather: Thank you! I think we work so well together, because we are opposites! I have more of a songwriting background, so I bring a lot of song form, lyrics/ vocals,  melody, harmony and story-telling knowledge and experience to the table.

Dewey: Yes! We are the Yin to each others Yang. I am hardcore into sound design. I will just sit there for hours on different VST’s, cooking up crazy noises. I am also really focused on the mix while we are writing.

We add something refreshing to the scene. We are not afraid to get loud and crazy. Our sets have multiple genre and tempo changes, while we jump and dance around acting like total fools for the crowd, to get them going wild. We also bring a realness to the scene, because we really care about the people we work with and the people who come to see us. We have respect for the craft and we always give 100% no matter how big or small the gig is. 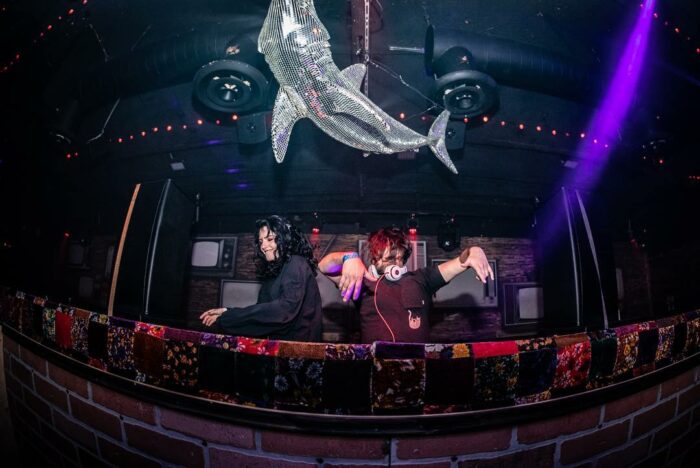 Blast Off is via No Tomorrows Recordings out of London. How did you get connected with them? Can you tell us a little about the label?

While looking for a label to release our music, we found No Tomorrow on Beatport and saw that their music is very much in line with the type of music we make. We sent them music and began talking and found their values and mission to be something we believed in. They have been really great to work with, and it’s been a lot of fun.

Like all sub genres within electronic music there are constant developments and trends. How do you like to stay on top of trends? Do you notice particular trends within the electro house or electronic music scene in general?

We listen to a lot of music, not just electronic music. We feel like right now a big trend in music is crossing genres/subgenres like Marshmello’s collab with A Day To Remember, Kayzo with Underoath, or Dua Lipa and Dillon Francis.

What artists are inspiring you today?

So there you are in front of a 3000 person crowd with the best sound system known to man. What is the first track you drop?

“Blast Off” by Eflorem ‘cause it gets the party going! 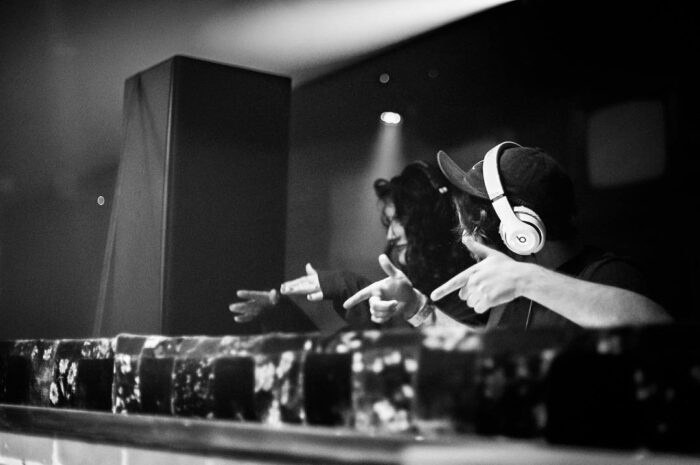 How do you guys communicate during a live set to stay in sync in the heat of moment? What is the dynamics behind the decks?

We usually like to have some sort of game-plan for the set. On stage we talk to each other a little bit, and we usually like to do four tracks each at a time. Whichever one of us not playing at the time, is hyping up the crowd and dancing.

Heather: I have never been to Disney World…or anything Disney related.

Dewey: I have never done a talent show, due to having stage fright when I was younger.

Is there a story behind the name Eflorem?

Dewey: When we first met, we each had our own solo projects going on. I went by “Eddy M…”

Heather: And I went by “EfloBot..” *laughs* So when we decided to become a duo, we took both names and morphed them together, creating “Eflorem.” We realized that the “Eflor” part of the name, has to do with flowers (in latin origin) so we made the “O” in the logo a trippy flower. 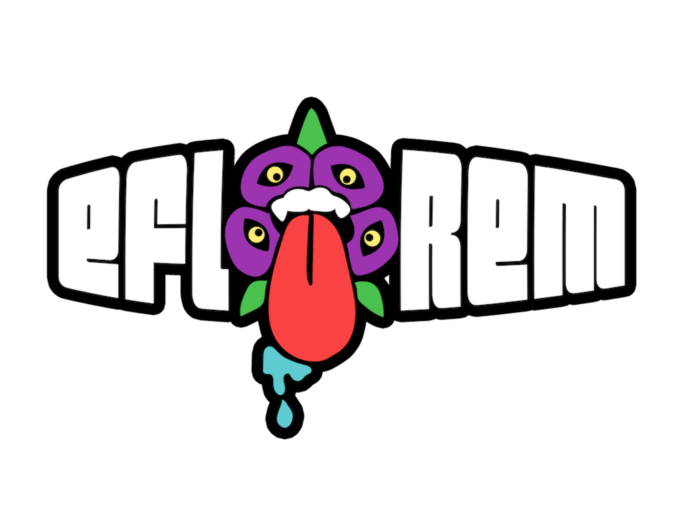 What is next for you guys?

Dewey: What she said! *Laughs*

What other immediate goals do you have as DJs and Producers?

We really want to play festivals! There is this magical energy at festivals that just can’t be explained. We also would love to do a tour. Maybe in some other countries. Another goal is to collaborate with some artists that we really look up to, like some that we mentioned before.