Pretty Lights with the Colorado Symphony was Purely Magical

All
By Brett Napoli

What happened last month at majestic Red Rocks Amphitheater in Morrison, CO was something I won’t soon forget. This wasn’t just your average kick ass Pretty Lights show, it was a showcase of true musical talent. A performance with an eclectic mixture of energy, rawness and elegance.

To start, Red Rocks Amphitheater is widely recognized as one of the most beautiful open-air amphitheaters in the United States.

With a capacity of just under 10,000, epic mountain views, legendary sound and an incredible history spanning over 100 years of shows, this venue is the definition of what experiencing music should be. If the scenery doesn’t get you, the sound will.

This was my 4th visit (7th show) at Red Rocks, coming each time by plane from South Florida and leaving with my jaw on the floor.

Picture yourself dancing on the side of a mountain overlooking the city of Denver, lightning striking in the distant valley, abundant plush greenery of all varieties and two gigantic red rocks rebounding sound directly into your flesh vehicle. Boss.

For those of you who haven’t been, put Red Rocks on your musical bucket list and you absolutely will not regret it.

After seeing Derek perform all over the country, its clear there’s something special in the air when he performs in his home state of Colorado. I was lucky enough to experience the first live band performance at Red Rocks just a year ago, and to me, coming back annually is now a ritual.

On the heels of an international tour and likely PL’s biggest year yet, this performance was extra special to begin with. 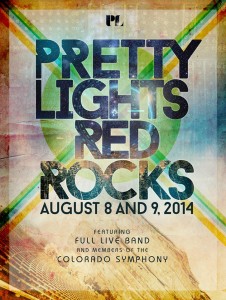 The 2 nights of shows featured 3 full sets of Pretty Lights: a DJ set, a set with the full band, then a third set featuring 13 members of the Colorado Symphony.

For the DJ set, both nights featured your standard badassery from the man himself. Each DJ set brought high energy tracks ranging from classics to twists on new stuff that got the crowd bumping while it was still light out. Needless to say, the tone was set.

The second set with the full band blew the first sets away by adding incredible depth, interesting instruments and varying in tempo from track to track like a rollercoaster. Each and every performer threw down; especially Adam Deitch who was in top form, bringing heat from the drums at all times.

Just when you couldn’t ask for more, the Colorado Symphony strolls in and takes the entire house to the next level.

Performing with a symphony can’t be an easy task, and the effort put forward by everyone on stage was not only beautiful, but impressive and nothing short of legendary. 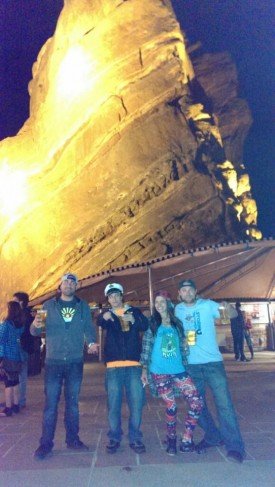 It didn’t flow quite like your usual show, pausing for a moment between songs to sync up the entire group. Giving each of us a minute to take a deep breath, glance at our friends and spit out an incoherent sentence or two that likely included a “holy sh*t”, “that was insane,” or your occasional “Wow. Wow. Just wow.”

The added sound of the orchestra was eloquent and refined; reminding each of us why we fell in love with music in the first place. Bringing the sound of original Pretty Lights music to the harmonious hum of strings, horns and drums dancing together in perfect harmony.

To classify this show as just electronic music, dance music, or even EDM would be almost insulting. It was simply beautiful music.

I tip my hat to Derek, the Pretty Lights band, the Colorado Symphony and the crew. For the dedicated PL fans and all who witnessed, this was more than just a show, it was a lasting life memory.

Jim Morrison Predicted the Future of Music in 1969

Arty – Up All Night (Lenno Remix)