As America continues to feel more and more split down the middle on political issues, it was refreshing to see a kick ass show with so much crowd diversity.

It felt like a bouncing Benetton ad at Avalon in Hollywood on Saturday night, as NERVO tore it up.

Maybe it’s because twins Miriam and Olivia Nervo are Australian and bring a universal appeal with them. Or it could be because every race from young to old just needs an excuse to dance. And dance they did.

From the second the twins hit the stage, there was an intoxicating wave of excitement from this diverse crowd.

There aren’t too many artists that have this kind of universal appeal, but NERVO definitely does.

It was clear that these sisters have been at this a long time. From the choreography to the range of beats dropped, to the ease in which they worked the crowd, these girls are simply pros.

Even with some technical issues, the girls didn’t miss a beat (pun intended) by offering shots of vodka to anyone interested in partaking. However, from where I was standing, the sound was top-notch.

The girls have a vast mix of styles that they integrate into their mixes effortlessly.

One of my favorite moments was the transition from this tribal African jam, into an upbeat mix of Adele’s “Hello”, into some crazy beat that just sent me over the edge. My feet seemed to have a mind of their own, and my body was not in control of them.

After the technical issues were fixed, the beats seemed to get dirtier and funkier somehow. A mix of Fatboy Slim’s “Praise You” was definitely a crowd-pleaser as it morphed into a random dub beat that was just out of control.

The visuals were equally as impressive. Avalon did some upgrades since my last visit, and they added a bunch of screens for the visual experience.

The nonstop flow of neon images of the beautiful twins complemented the beats perfectly. In case you forgot where you were, there was always a NERVO image flying through the air to remind you.

If you ever have the chance to see these talented sisters, you should definitely do it. In times like these, it’s important to feel human, among many different types of humans, who all like to dance. NERVO is an excellent choice for making that happen. 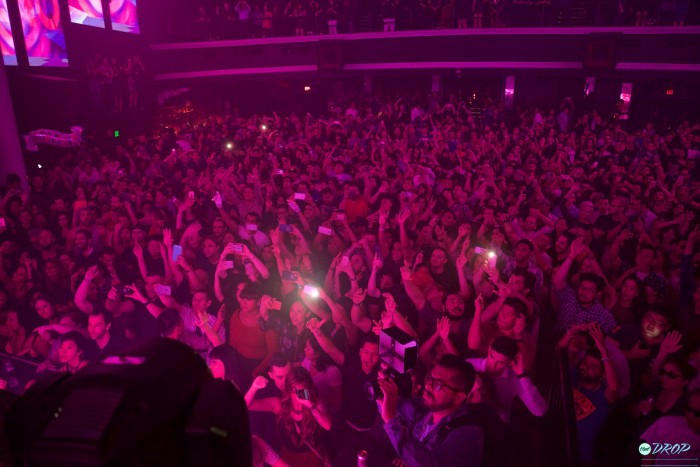