By mixing the trendy future house sound with his own signature groove, he has found a niche that allows listeners to continually dance while still maintaining the energy of a festival track.

We sat down with Mike Williams before his set on the Main Stage at EDC Las Vegas and spoke about his recent success.

He told us how it’s been since being mentored by Tiësto – first by developing a relationship in person at ADE (Amsterdam Dance Event) and then transitioning it into e-mail, text, and eventually a full blown collaboration.

His unique style is “between EDM and deep house influences” and he makes sure to balance groove and energy so that his tracks can be played at a main stage but also in an intimate club.

Listen to his EDC Las Vegas set below:

He enjoys producing other genres and perhaps in the future will further mix and evolve his sound.

Moombahton is one of the genres he has experimented with; certainly far off from his signature sound but it would be great to see other genres coming out of the young producer.

We also spoke about his influences being artists that incorporate piano into their songs such as Avicii, as he has been a pianist all of his life.

An additional fun fact is that he grew up with long-time friends Martin Garrix, Justin Mylo, Mesto, and other Dutch producers. They were a collection of young DJs looking to enter the dance music world and are now completely taking over. 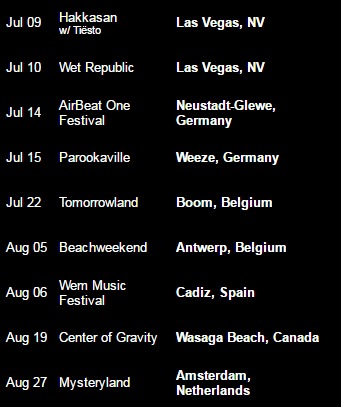 Swiss powerhouse producer and DJ, EDX is a favorite of ours and has joined us for the 279th episode of…

Tom Swoon has looked very at home on Ultra Music since signing with the dance heavyweights a while back. The…