The day the Cornavirus shut the world down, Kasbo and Vancouver Sleep Clinic were in the studio left to prepare a single for Carl’s upcoming album, The Making of a Paracosm. ‘Lune’ is available today, ahead of the album release set for October 23 via Foreign Family Collective/Counter Records. 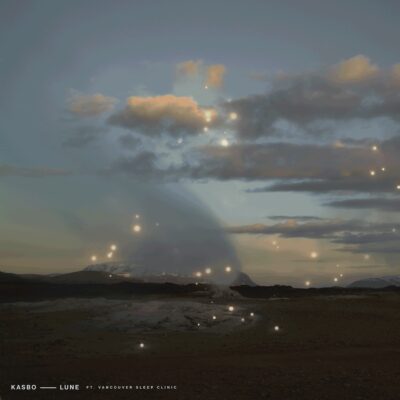 ‘Lune’ is a testament to how well Kasbo and Vancouver Sleep Clinic’s signature sounds compliment one another. With both artists rooted in the indie-electronic crossover space, Tim Bettinson’s dreamy, fresh vocals are the perfect counterpart to Kasbo’s meditative synths and soaring soundscapes.

Kasbo on ‘Lune’- “I started Lune right before my Places We Don’t Know tour in late 2018 where Tim was supporting me. I remember working on the song in the back of the tour bus and thinking to myself that Tim would be the perfect fit for the song, having been inspired by falsetto vocals from Bon Iver and Sigur Ros when making the instrumental. We never ended up recording anything on tour but in March this year, I convinced him to come to Gothenburg to hang out and record in my studio. He came and that night was when corona really broke loose, Trump announced he was closing travel to the states, and Tim who was going back there was really confused over what to do. It all felt like a big movie, it felt like we both now were stranded in Gothenburg all of a sudden, which was a very surreal feeling at the time. We ended up recording the vocals for Lune that same night. Tim is a pro and came up with the melody line really fast and we spent the rest of the night fine-tuning the mixing, lyrics, and overall vibe. So happy we finally made something happen together.”

Tim Bettinson of Vancouver Sleep Clinic adds — “I’ve been a fan & friend of Carl’s for a while now and was grateful to finally be able to collaborate with him on Lune when I spent a couple of special days visiting his hometown earlier this year. To me Lune feels like a sonic representation of the sacred conversations you share with a memory forever lingering in your dreams.

Vancouver Sleep Clinic is the brainchild of ambient singer, songwriter, and record producer Tim Bettinson. Their 2017 debut album Revival received widespread support, earning recognition from new fans and critics alike, with ‘Someone To Stay’ reaching over 50 million streams. Vancouver Sleep Clinic’s latest project Onwards To Zion (2019) has revitalized their artistic purpose and allowed them to take their journey to a more joyful and lighter space, while maintaining its original sense with matured intentions and clarity. While work with ZHU is further implants them in the electronic music world.

Since the release of his breakout EP in 2015 as well as tracks like ‘Found You’ via bitbird and standout sets like opening for Tipper and Tribe at The Gorge, Kasbo has positioned himself as an unstoppable force in the international electronic music landscape.

His highly anticipated sophomore album The Making of a Paracosm pays homage to his Swedish heritage both thematically and instrumentally throughout the project, which features collaborations from a host of Swedish creatives like Frida Sundemo, Freja The Dragon, Nea, and NOOMI. The Making of a Paracosm will again immerse listeners in a new surreal universe, born out of the dual worlds that live inside Kasbo’s mind between reality and the escape from it.