Illenium Shares His Struggles Through Letter to the Fam and Latest Single, “Take You Down”

It can happen to anyone.  Gender, race, social class.

America from coast to coast has been plagued by the opioid crisis. In 2016 alone, the Center for Disease Control and Prevention (CDC) found more than 64,000 people died from drug overdoses. Many of us, including myself, have seen friends tragically pass away and families forever changed.  It has become a national emergency for all of us to be aware of.

In a note to the fam, superstar DJ Illenium revealed his own personal struggles with addiction.

Illenium, who’s real name is Nicholas Miller, expressed his long battle with opiate addiction that eventually caused him to overdose on Heroin.  In the message, the 27-year old describes dark times in his life for him and his family as he toiled with the disease. The hope that so many go through seemed all but lost.

Miller credits music and his mother for saving his life, both of which have helped him stay clean to this very day. Further, the heartfelt message is the inspiration behind his song “Take You Down”. Read his letter to the fam below. 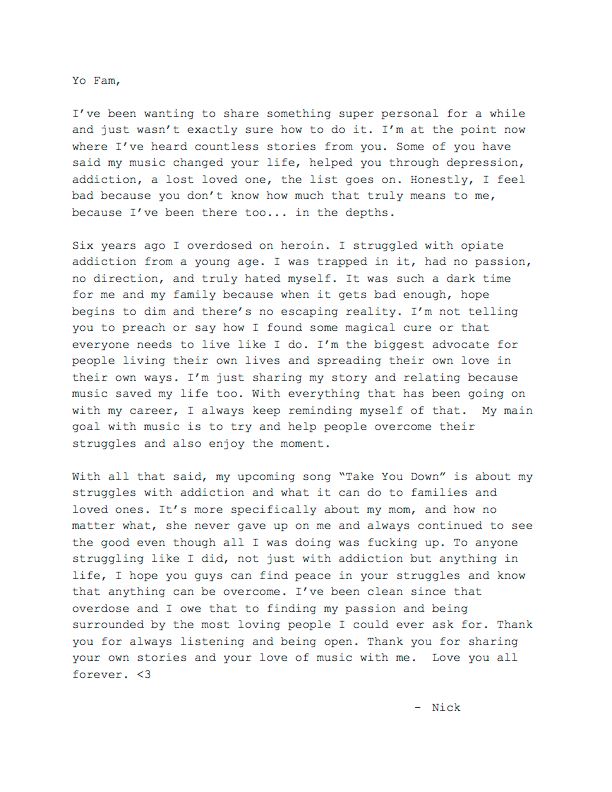 “Take You Down” originally debuted at the Global Dance festival in Denver in July.

It’s official release, which coincided with Illenium’s personal story, occurred on August 3rd. The song’s melody is powerful, with an uplifting tone seemingly designed for anyone going through a similar crisis. In addition, the high pitch vocals actually come from Illenium’s friend Tim James. For anyone going through struggle, the track should come as reminder that love, hope, and help always exists.It is never too late to change your life around, as Illenium once did.

Listen Illenium’s “Take You Down”:

The group of musicians known as The Glitch Mob are based out of Los Angeles, CA. Josh “Ooah”, Justin “Boreta…

Ibiza duo, Christian and Alan Anadon, better known as the Mambo Brothers, has been killing it with their recent…