It is almost miraculous how hundreds of thousands of strangers can come together for a weekend of immersing themselves in thunderous bass, jaw-dropping visuals and lighting effects, and utterly awe-inspiring experiences in celebration of Insomniac’s 20th anniversary of the famed Electric Daisy Carnival in Las Vegas this past June 17-19.

A truly remarkable milestone in dance music history hosted over 400,000 passionate dance music enthusiasts, where seasoned rave-hardened veterans and newcomers alike congregated for one of the most highly-anticipated dance music events of the year.

It seems that every year, Insomniac outdoes themselves and sets a new standard for EDM festivals both locally and abroad; and this year is no different whatsoever. 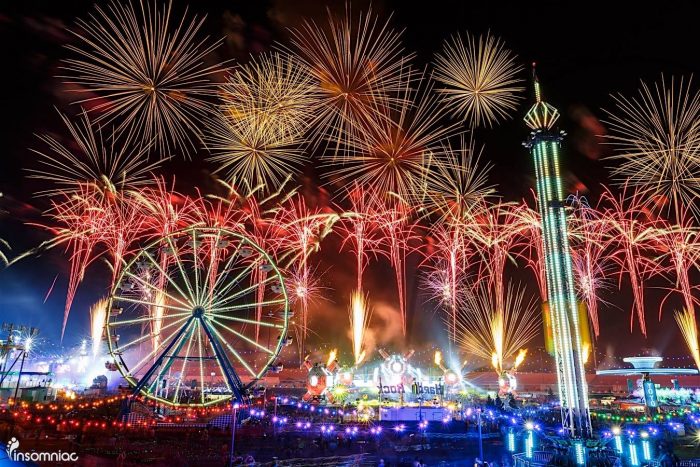 The festival grounds at the Las Vegas Motor Speedway were home to eight innovative stages, an abundance of stimulating art installations, and an army of costumed performers.

In addition there were breathtaking fireworks shows, not to mention the astounding lineup of some of EDM’s hottest artists and promising up-and-comers adding up to the wondrous experience that many ravers simply call “home”.

If you’ve been to EDC Vegas before, you may be familiar with the feeling you get the moment you enter the speedway. 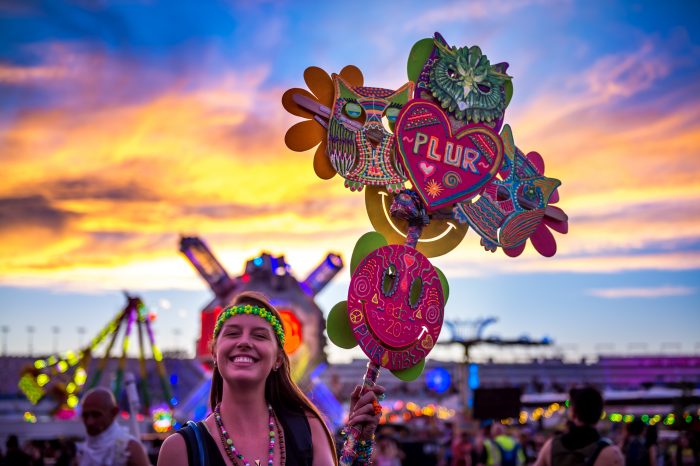 Looking over the grounds, your inner child explodes with excitement while taking in the view of the rides, the themed stages, the sounds emanating from the masterful DJ’s, sitting on the doorstep of an unforgettable and blissful journey which will be you fix until the next festival.

Walking through the speedway, scores of dance music enthusiasts wandered across the wonderland that is EDC. The sights, the sounds, the emotion in the air is all part of the masterfully crafted atmosphere that is the experience of Insomniac’s flagship music festival. From the techno stage of Neon Garden, across EDC town to the bass heavy Basscon and Basspod stages, past the Ferris wheels to the hardstyle Wasteland stage, there is something here for every kind of raver.

Lineups varied from A-list DJ’s on the big stages to up-and-comers playing on Stage7 and in the Upside Down House and the styles, genres, and variations of electronic music were as eclectic as the types of people who attended.

At the head of the speedway sits the kineticFIELD, with an owl temple theme where ravers congregate and experience the unity of the dance community. 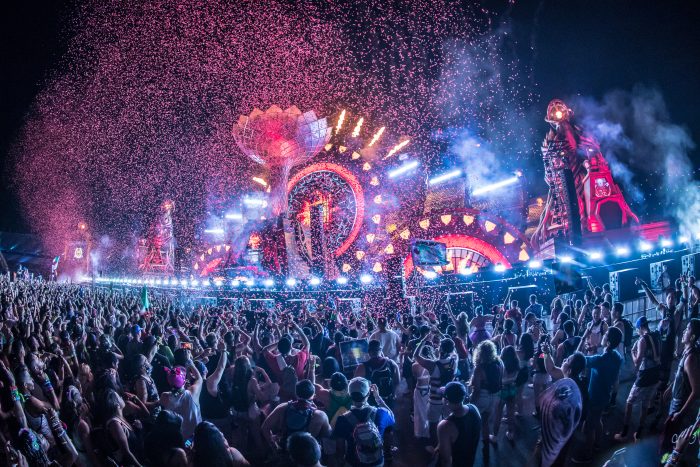 A notable main stage set from the first night of the festival was JAUZ who took the headliners on a ride through the sound spectrums dropping his signature bass house and getting grimey with a strong dubstep overtone to his killer set.

Day two brought amazing performances by Seven Lions and The Chainsmokers to those dancing religiously at the Owl Temple, followed by an epic set by Alison Wonderland, a slightly surprising and unorthodox run by Tiesto who brought out John Legend to sing his hit song “All of Me” and to debut a new collab from the two, showing just how versatile dance music can be.

We also witnessed a grand and phenomenal closing by Galantis who really never disappoint.

circuitGROUNDS debut as a 360-degree immersive stage that was almost three times as large as last year. 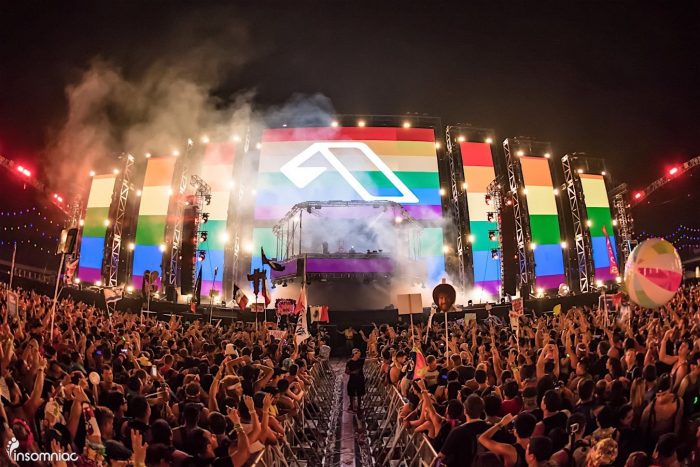 Above & Beyond at circuitGROUNDS, EDC Las Vegas 2016 via Facebook

Day one started with an energetic festival trap set by Party Favor, who attracted flocks of eager festivalgoers and commanded and unprecedented dancefloor. Groups of friends and strangers gathered to dance, laugh and cry at Kaskade’s unforgettable performance which was only enhanced by the full-circle LED fixtures that surrounded the dancefloor.

Day two brought us Martin Garrix whose undeniable energy only reinforced his high-flying status among the hottest DJ’s, and it would be a sin not to mention the euphoric and emotionally moving performance by Above & Beyond, who dedicated their set to the lives lost at the recent terror attack at Pulse Nightclub in Orlando, displaying the names and standing in solidarity with the fallen while simultaneously promoting love and unity. Circuit

Grounds was home to Dreamstate on day three, which was the haven for all of the trance heads in attendance; showcasing an interdimensional audiovisual experience by Ferry Corsten’s Gouryella that almost literally took us to another end of the universe. Yes, it was profound, like the meaning life type stuff. Speaking of Ferry Corsten, he and Markus Schulz got together as the New World Punx and played an intimate earthquake of a set inside of the tiny Smirnoff House.

The electricity was undeniable in that tiny, hot little stage where a hundred people squeezed into the tiny room. Those lucky few who bore witness to the absolutely mind-blowing psytrance experience in that tiny place, literally an arm’s reach away from the Punx were honored with a real and rare treat; it was definitely a festival highlight which was only amplified by the small-scale and intimacy of the performance.

cosmicMEADOW hosted by Audiotistic took headliners on a journey through an all-embracing mix of turntable sets, to live music formats throughout the 3-day music binge. 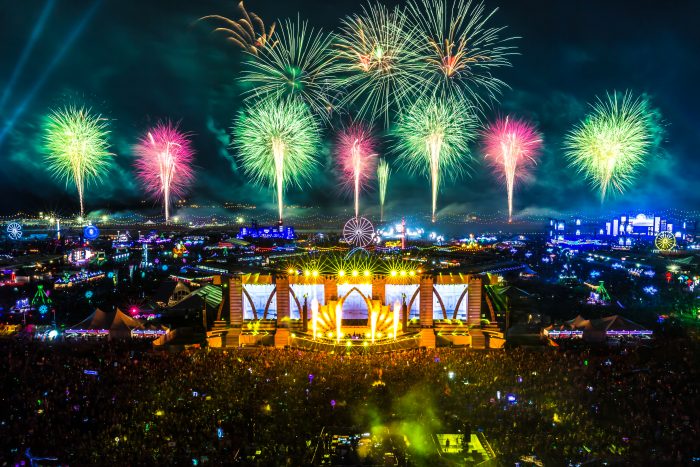 Fireworks at cosmicMEADOW via aLIVE Coverage for Insomniac

Crowd favorites such as Knife Party and Ephwurd brought in the masses. But who can pass up mentioning the new kid on the scene, Marshmello who like the pied piper filled circuitGROUNDS all the way up to the bleachers to delivering the heat by roasting and melting faces a mind-blowing performance with his almost whimsical yet dirty bass-filled sounds and trolling his fans all at the same time.

For a long time, fans have speculated who may be hiding under that sweet, fluffy, chewy mask, some say it’s Martin Garrix, others say its Skrillex, but all of you are wrong. Marshmello brought both Garrix and Skrillex onto the stage to trump those theories, and at the very end, trolling the crowd by taking off his helmet and revealing himself as Tiesto. Marshmello is not Tiesto, but you have to love that sense of humor.

All in all, Insomniac once again delivered the mind boggling phenomenon that unites people from all walks of life to come together and enjoy the language of the universe; music. 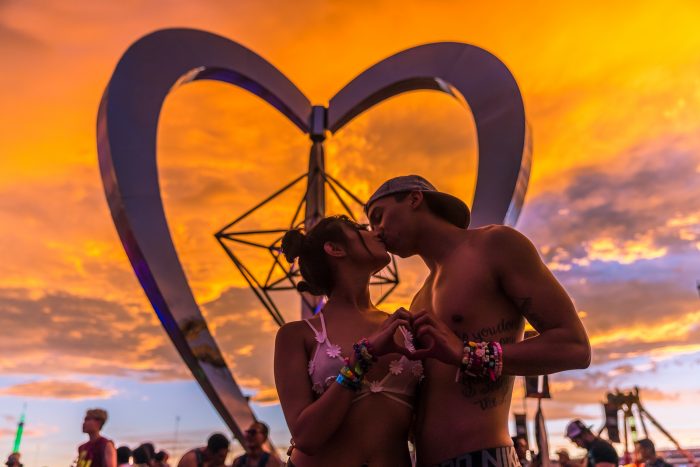 Love Is In the Air via aLIVE Coverage for Insomniac

EDC has been and continues to be soaring to the clouds as far as production and experience quality goes, and keep pushing the boundaries with the most innovative stage designs, pyrotechnics, audio—visual technology, and exciting lineups.

The scene is in good hands with Insomniac at the head of North American dance music festival production; thank you for continuously upping the ante, and helping keep the dance music festival experience fresh, exciting, and giving dancers worldwide a place to unite and call “home”.

We all patiently wait through our withdrawals until next year’s Electric Daisy Carnival, when she will be 21 and legal in Vegas! 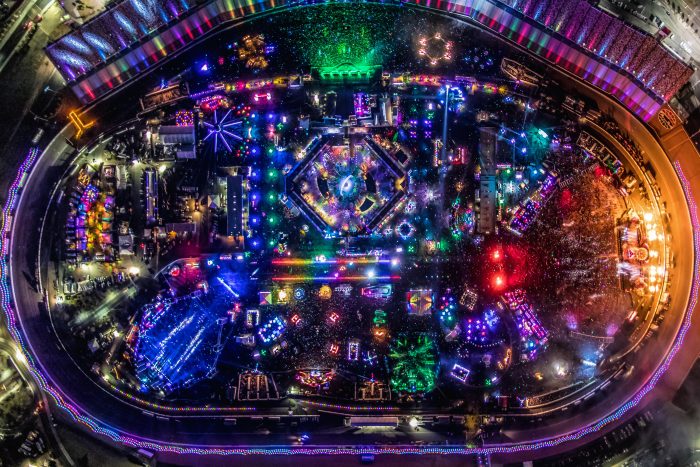 Relive EDC Las Vegas 2016 with our DAY-TO-DAY Recap Below:

Insomniac announced exclusively through EDC LIVE, the return of fan-favorite Halloween festival, Escape: Psycho Circus, to the NOS Events Center in San Bernardino on October 28 and 29, 2016. 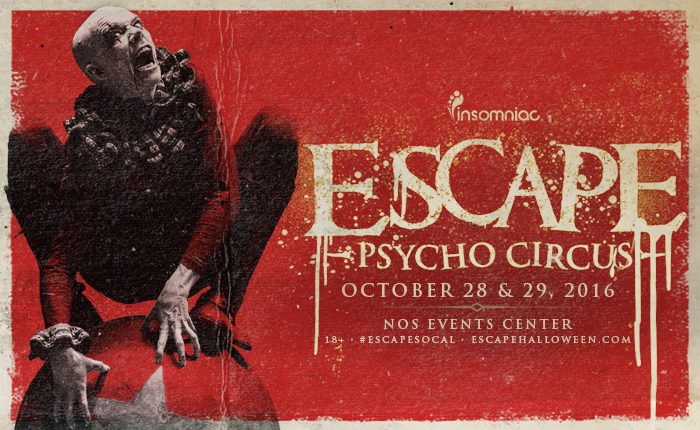 Insomniac introduced EDC LIVE Presented by Smirnoff, allowing fans everywhere to tune in on YouTube, Insomniac.com, LNTV.com and the official EDC Facebook Page, to watch all the magic unfold from dusk until dawn. The ground-breaking live stream brought the festival into the homes of viewers across the globe

Headliners shuffled to the ultimate Basscon experience with sets by hardstyle artists TNT, Gunz For Hire, Adaro and more. 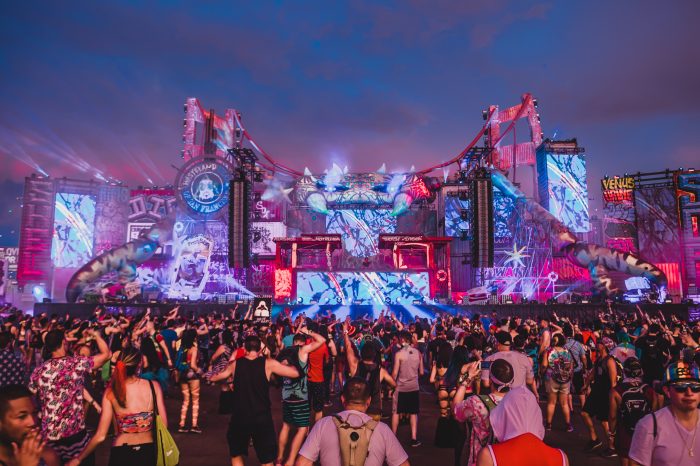 wasteLAND via The Holy Mountain for Insomniac

During the EDC20 celebration at kineticTEMPLE, Robin S surprised fans with a special live vocal performance of her iconic anthem, Show Me Love, a track that has captured the hearts of decades of dance music lovers. 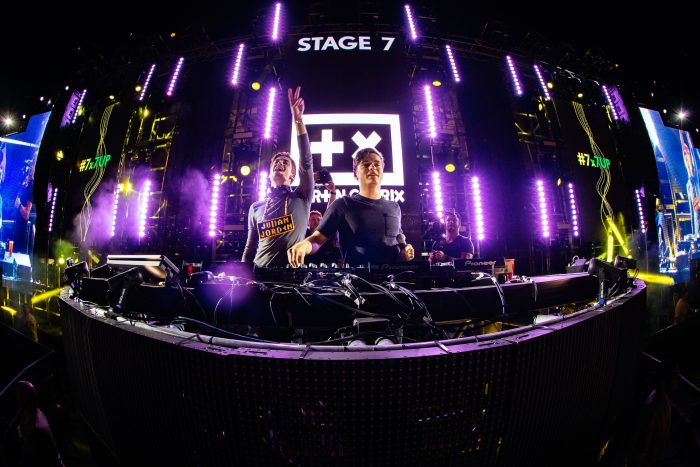 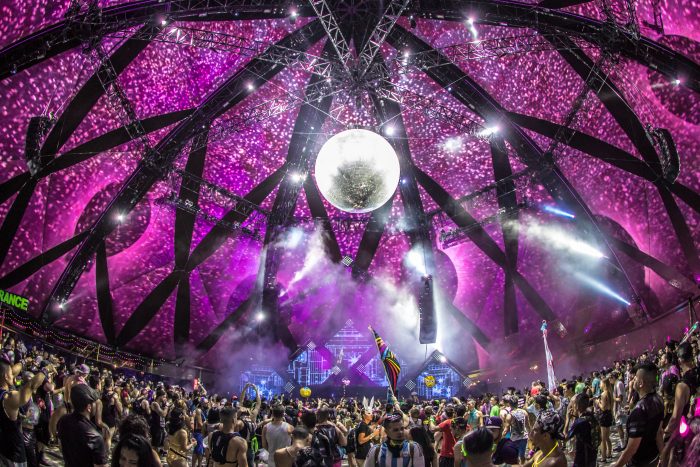 Love filled the air as Headliners celebrated their commitment to each other during vow renewals and legal wedding ceremonies within EDC’s two new wedding chapels, located inside EDC Town.

Representing two iconic pillars of EDC, The Chapel of Nature brought couples together amidst earthy tones and wood-carved hearts, while The Chapel of the Future resembled a portal to space and beyond. 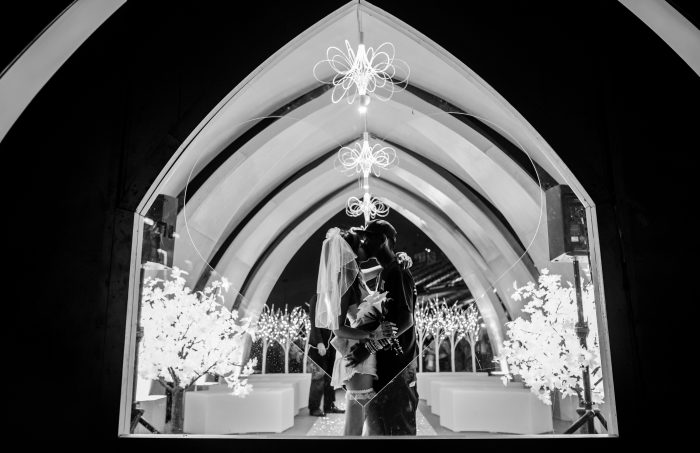 A slew of surprise appearances and performances delighted fans all weekend. Tonight at kineticTEMPLE, Grammy Award winning artist, John Legend, joined Tiësto on stage for a performance of their hit song “All Of Me.” 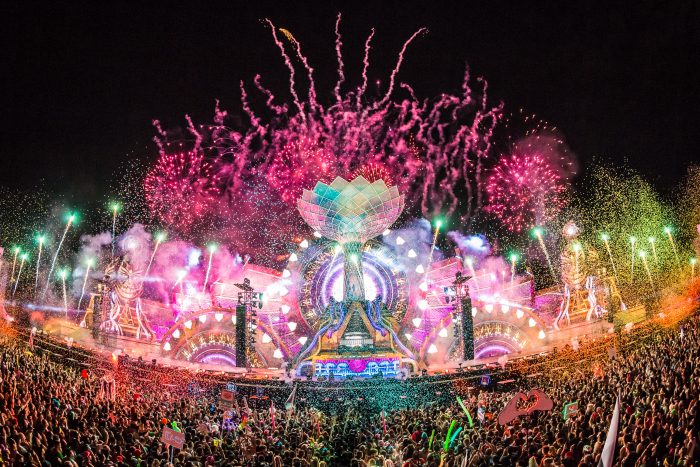 kineticTEMPLE via aLIVE Coverage for Insomniac

Skrillex took over the mic during the Marshmello’s set on cosmicMEADOW, and made an impromptu stop at neonGARDEN, joining Richie Hawtin on stage. 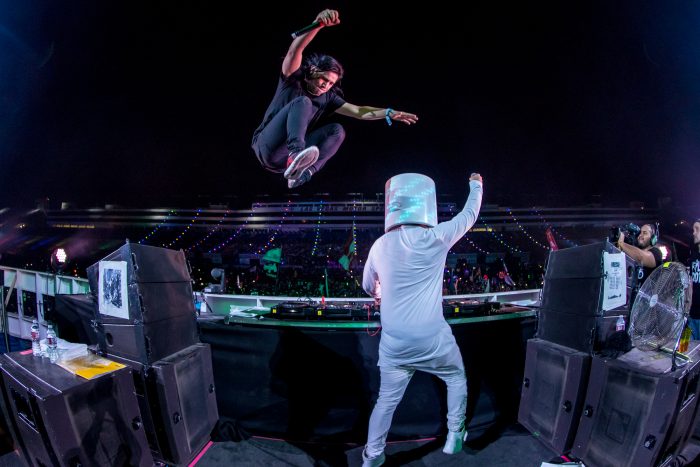 Paul Van Dyk’s performance was met with a roaring applause as he made his first festival appearance after overcoming a serious injury. 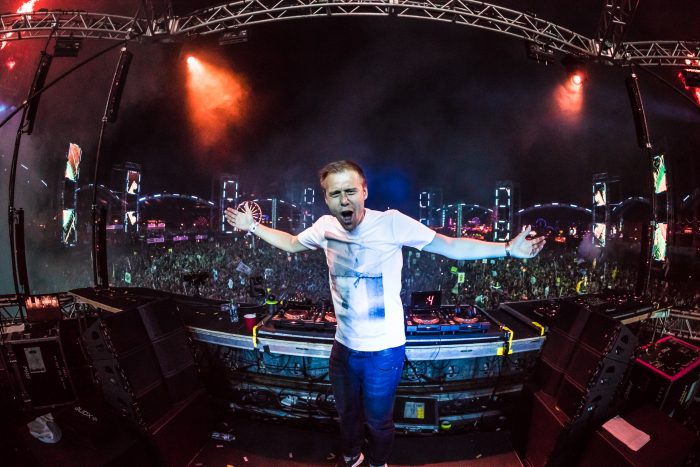 Armin van Buuren at circuitGROUNDS via aLIVE Coverage for Insomniac

As the sun rose over the mountains and the last set came to an end, Headliners left Las Vegas Motor Speedway having been a part of a pivotal moment in dance music history.