Premiering the track in style alongside a live performance by Corey Feldman with a full band, a house music set by DJ AC and special guests as well as the unveiling of Corey Feldman’s NFT, the dance party will offer a proper return to the stage for Corey. You may have caught DJ AC opening for Paul Oakenfold last year and it will be exciting to see where she will be waving the dance music flag next. 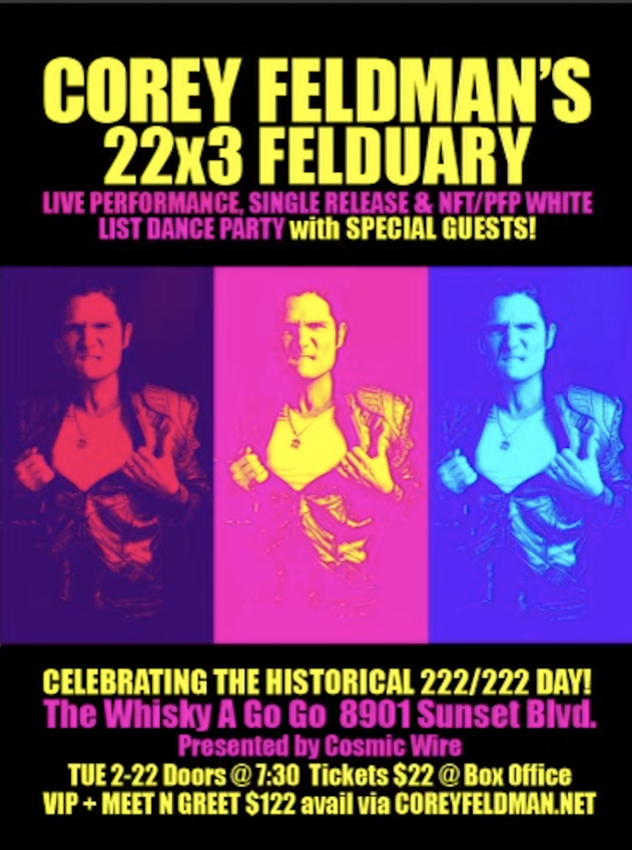 Corey Feldman shares, “I’m super excited to announce my first live performance since before the pandemic began, and my first performance with a band that’s been open to the public in almost five years,” said Feldman. “2-22-2022 is a special date, so come celebrate and join the fun.”

In addition to performing new and classic songs, Feldman will be giving a first look at his upcoming NFT drop in partnership with Cosmic Wire. Those who hold the NFT will have access to the upcoming Corey Feldman metaverse. The upcoming drop is the second collaboration between the two, with the first being a hybrid NFT auction of the prosthetic ear Feldman wore while starring at Teddy Duchamp in the iconic film Stand By Me.

Feldman and Cosmic Wire have collaborated even further with the release of his singles ’Feeling Funky’ (2021) with BLAZAR and ’Comeback King’ featuring Curtis Young (2022). Both tracks appear on Feldman’s Love Left 2: Arm Me With Love which is currently available as part of his historic Love Left 2.1 Box Set which includes four CDs, two DVDs, a hologram, and more.

BLAZAR is coming off a massive collaboration with new studio mate, Afroman, ‘Step it UP’.  The electronic, hip-hop influenced tune is an ode to bettering yourself, capturing the vibe of the current era while continuing to bump timeless, old-school sounds.  The synth exploration continues into Corey Feldman’s project and more Cosmic Wire releases that will soon emerge.