The Cosmic Wire label head and electronic music producer BLAZAR shares, “we’re so excited to welcome Corey Feldman to the Cosmic Wire family. This is a reinvention, something new, and something brilliant, from one of the most recognizable faces on the planet. Corey is the real deal.” As Corey Feldman crosses a half-century today, comes the re-imagined version of, ‘Feeling Funky’, originally off his debut album, Love Left, and the soundtrack of Dream a Little Dream 2.  BLAZAR re-designed the single with highly-danceable, electro funk synth waves and signature vocal work.

‘Feeling Funky’ harnesses dark rock tones for the intro then brightens up with a bursting beat that won’t quit, pumping good vibes and reminding us to dream a little dream.  You will want to be on the dancefloor when Corey performs ‘Feeling Funky’ live at one of his carefully-curated events coming soon. 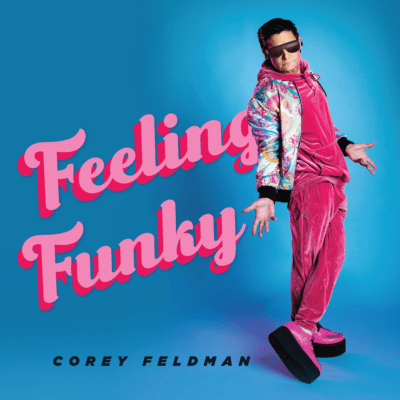 Stream ‘Feeling Funky’ on all platforms

‘Feeling Funky’ is the first Numix from Corey Feldman’s, Love Left 2. The 25th Anniversary of his debut album, Love Left, is also celebrated with the Love Left 2.1 box set packed with raribles, while more of his novelty art will soon surface as NFTs.   For comparison, sample the original cut of, ‘Feeling Funky’.

As the 36th Anniversary of The Goonies, 35th of Stand By Me, 34th of The Lost Boys, 32nd of Dream a Little Dream crosses, Corey Feldman digitizes iconic items from those movie sets to make available in his custom proprietary NFT store established by Cosmic Wire.

To continue the summer of love 2021 there will be an immersive NFT based streaming event celebrating 50-years of film with Corey’s most classic films and cast, followed by a live celebrity filled concert celebrating his music career as he enters his fiftieth year. Feldman’s unearthed collection of movie memorabilia will add aesthetics to the love-stamped nights. Premiere virtual ticket holders will be treated to a more immersive experience with Corey Feldman and friends.

Remember at the end of Stand By Me when Teddy Duchamp (Corey Feldman) walked away into the distance, then we eagerly read the “what happened to him” description at the bottom of the screen?   Now we officially know, 35-years later.

The German producer Joquerio brings the elegance from acoustic music together with the driving forces of electronic music.  Joquerio’s…

Is CBD Oil Effective for Cats with Cancer?

Cancer is unquestionably one of the worst medical conditions that exist. When it happens to our pets, it is incredibly…