All
By Cody Guynn

Just a few days ago the goriest label in LA, headed by Borgore himself, announced the official date for one of the craziest pool parties to hit Florida – Jagermeister Presents: Buygore Pool Party 2016.

Along with the announcement came the trailer for the fun-in-the-sun event or as we would say in today’s lingo lit in the sun. Sponsored by Jagermeister, Buygore showcases the wet and wild event at Miami’s own The National.

Last year’s event was the first time Miami Music Week hosted the head honcho of Buygore at The National, congregating 1,200 revelers to the sold out Buygore Pool Party. The event was considered a full day of face melting bass and sun soaked craziest filled with people from all over North America and other parts of the world.

1,200 Buygore fans not only got to spend all day with incredible views, food, drinks and one of the nicest pools in Miami but also top of the line artists including Cedric Gervais, Nervo, Jauz, Deorro, Rain Main, Dirty Audio and Kayzo just to name a few. Following the success of the Miami event, the label went on to host another poolside party during EDC Vegas week at Foxtail, featuring performances from Styles & Complete, Ghastly, Cedek, Bad Royal, and Ditta & Dumont.

This year will be crazier than last and filled with surprises. It’s one of my favorite parties to throw each year with our good friends Jagermeister.

Don’t envy over the event hurry and grab tickets to this year’s WMC event and get ready to get WET & ROWDY with Borgore and his Buygore squad. Tickets are available here 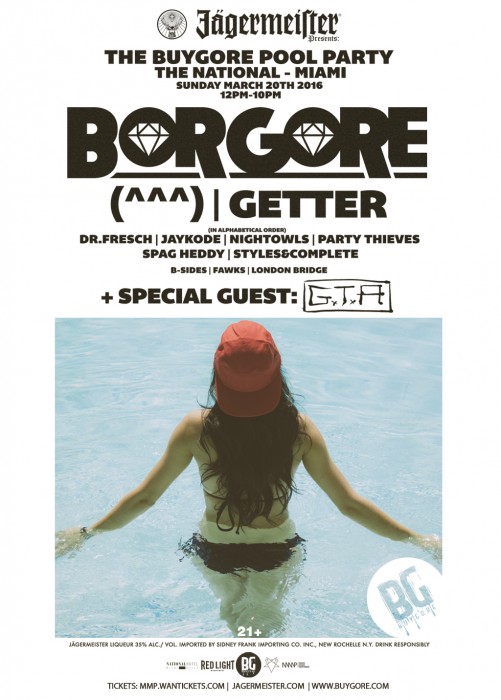 What initially started as a radio obsession, exploded and evolved into one of the most respected and tuned-in channels…

5 Goto Websites For All Your Music Festival Fashion Needs

With the 2016 festival season approaching fast, its time to start coordinating what to wear! The best part about any…