One of the more authentic Burning Man experiences surfaced in downtown LA, The Fluffy Cloud.  The 3-story, 360 sound and light experience was founded by Jorge Perdomo, Deniz Akyurek and Gene Harrison for Burning Man 2019.  Since the inception The Fluffy Cloud’s 60,000 watts of tier-1 sound has also rained down at Art Basel and Love Burn. Next up is the Playa Playground Festival in Las Vegas for NYE alongside more forward-thinking sound camps such as Incendia, DISTRIKT, Playa Alchemist and Dancestronauts. 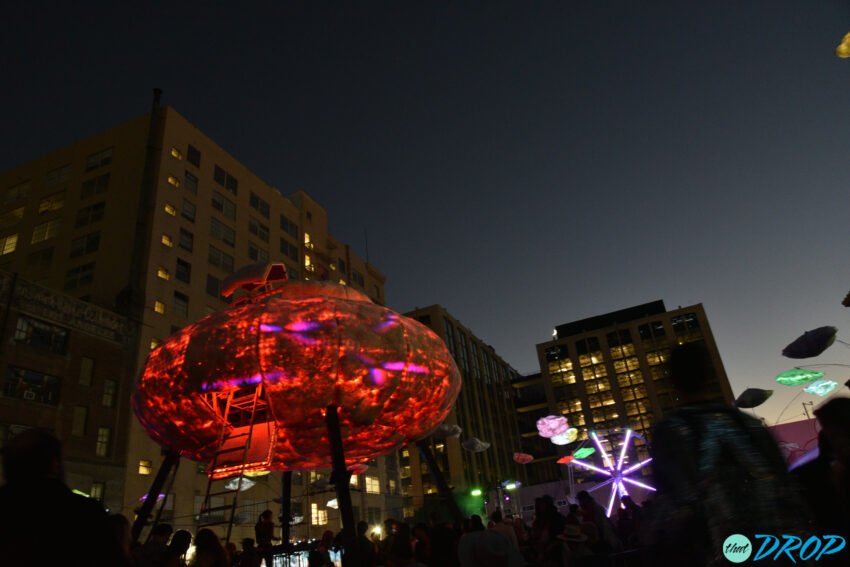 For the downtown LA edition the cloud curators kept pushing the boundaries of encompassing all the senses within an electronic music experience, pulling a lineup built of artists from Crosstown Rebels, Anjunadeep, Akumandra and Afterlife while drawing a proper crowd that included a particularly special guest, Corey Feldman who was linked up with his revered house music DJ wife Courtney Feldman that just opened for Paul Oakenfold. 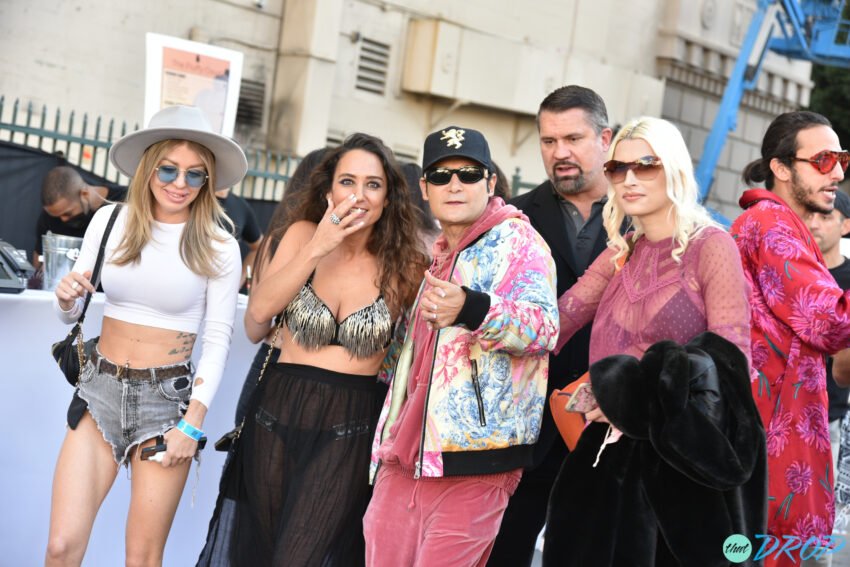 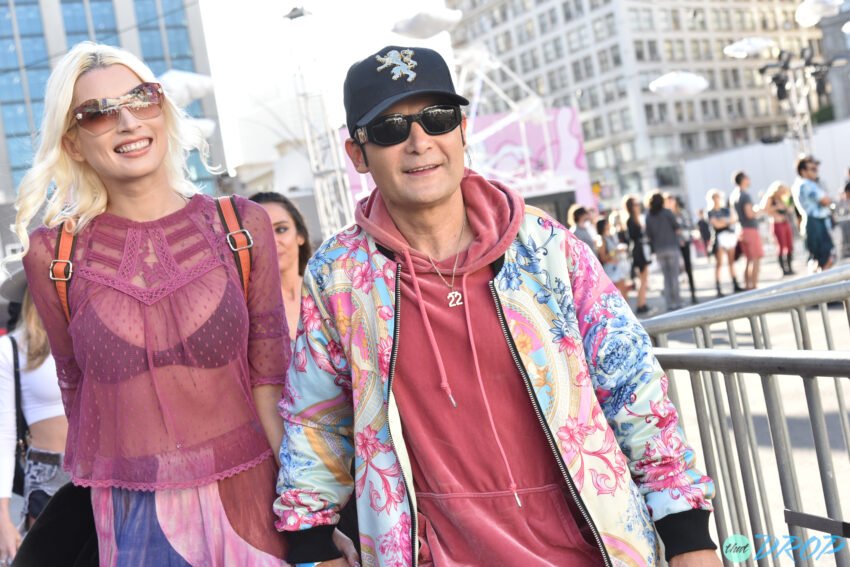 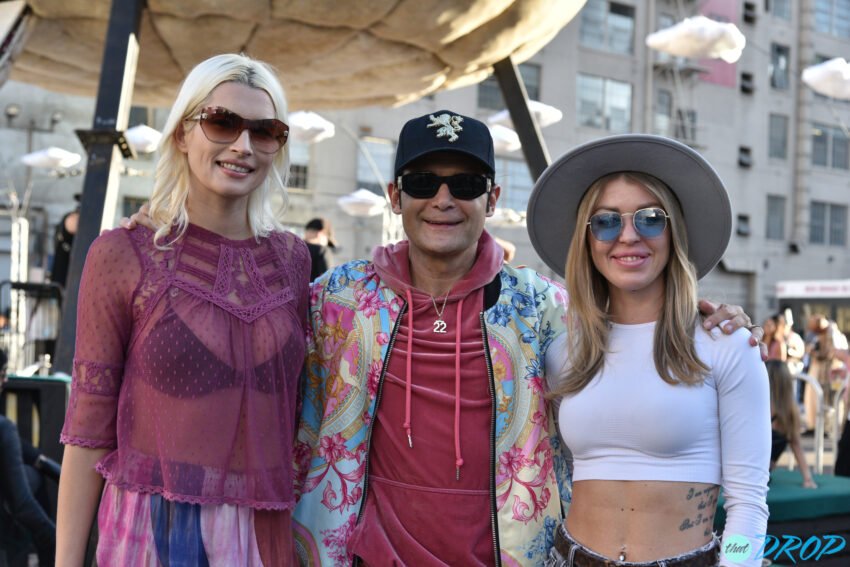 Corey Feldman comments on the acts Haut‘s Live Ensemble, Lauren Mia, Yulia Niko, Sainte Vie and Mind Against as well as his cloud experience, “both the opening DJs were incredible. We were totally blown away and locked in. The thing I loved about it was the way they spread out the sound system.  They were playing music that was really well fitted for the format that put off a ethereal vibe.  You felt like you were literally on the clouds.” 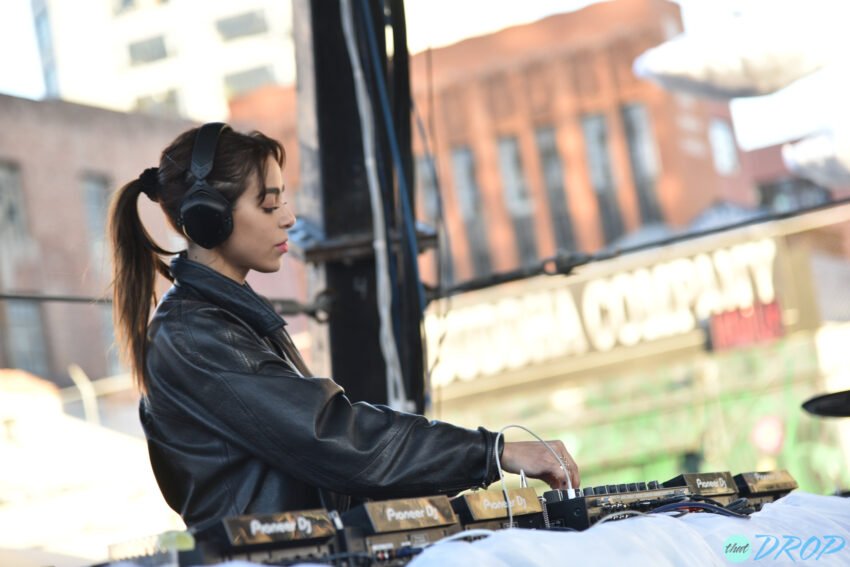 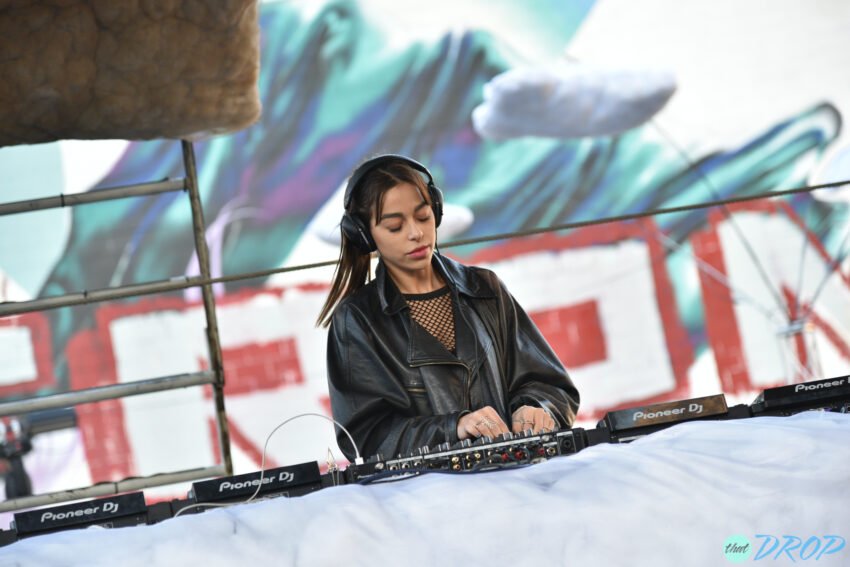 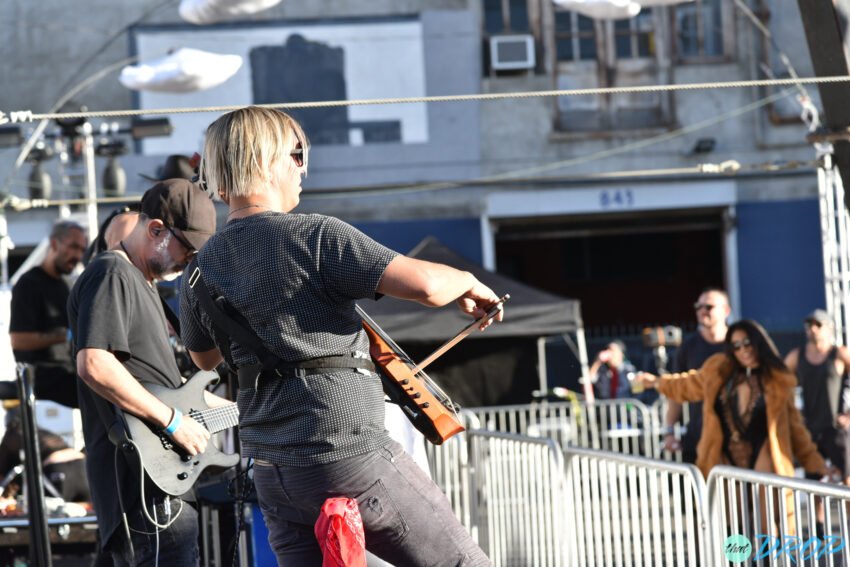 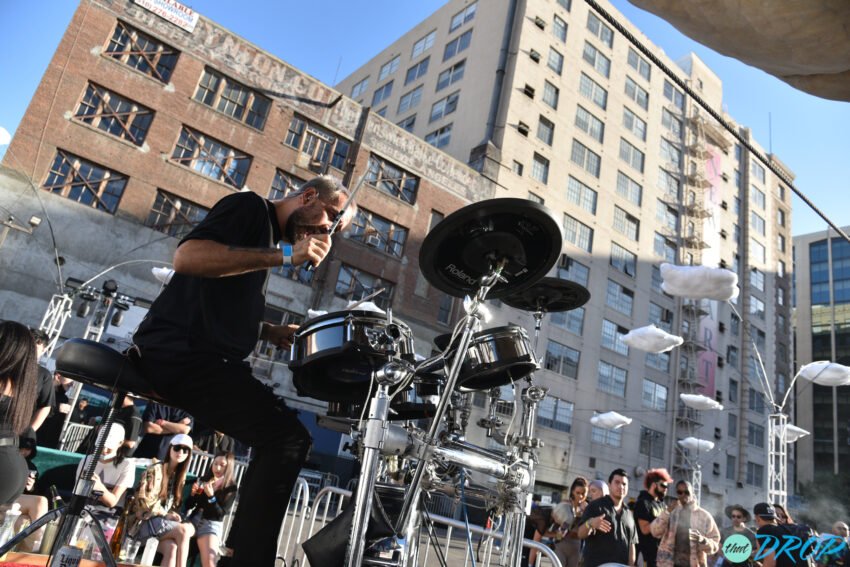 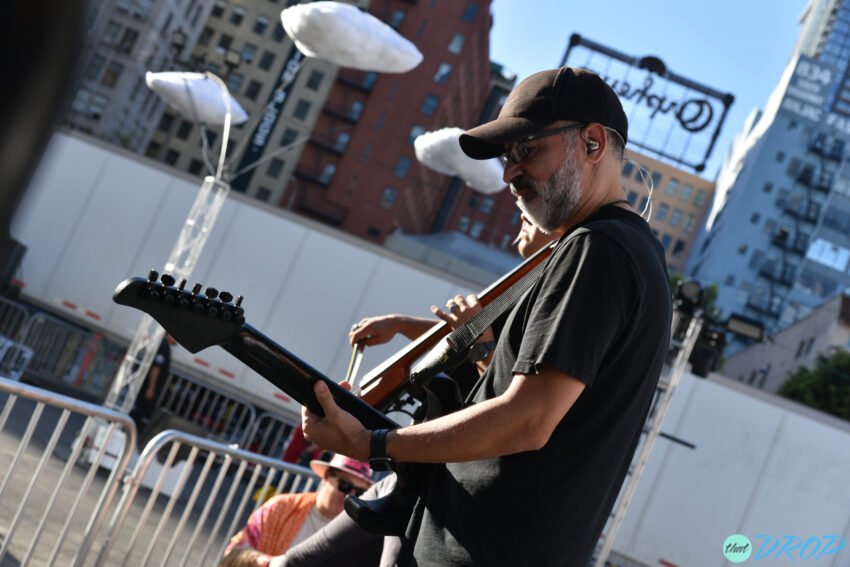 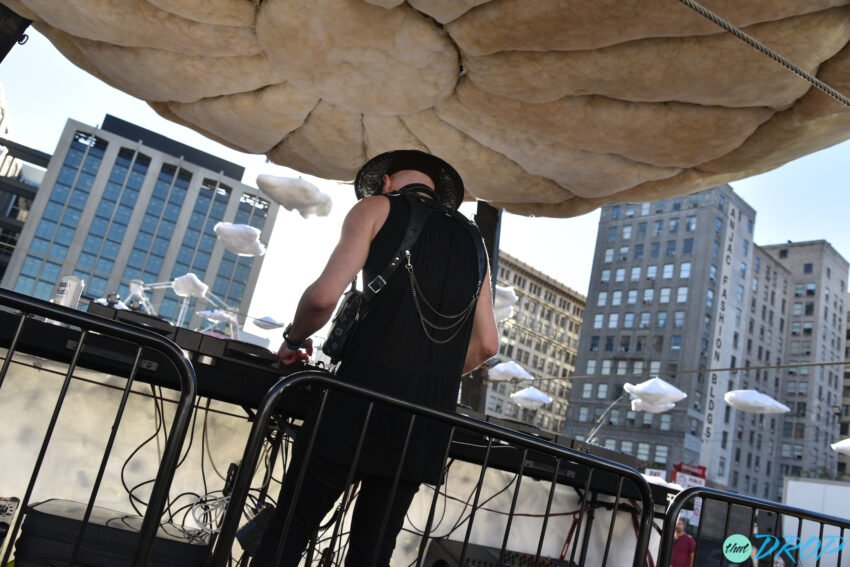 Getting the opportunity to chat with Corey Feldman more after the event, we discovered Corey’s true appreciation for Burning Man and his journey through the electronic music community, which includes a highlight of Skrillex performing at his birthday party and a series of remixes such as ‘Feeling Funky‘ with electronic music producer and Cosmic Wire label head, BLAZAR within his upcoming Love Left 2.1 box set in light of self-love due out December 11th.

So if you were not there, Corey Feldman hosted a tent at Bonnaroo where fans were raving “we want to party with a Lost Boy!” and now after the cloud Corey hopes to help set up camp at Burning Man for the raw experience.  Corey went on to share how the principles of Burning Man resonate with him especially: radical self-expression, radical self-reliance and gifting.

“That’s my outfit right there. If you look at all three of those, they pretty much example who I am. I believe you have to give to get back. The energy you put out there is the energy you get back.  Anyone that can make it through every level of abuse and still be brave enough to put out more art and continue to put myself out there, that is self-reliant.  I used to be apart of the studio system, then I said, ‘I don’t need the studio system’ I have my fanbase!’  Half of the films I have been in over the last 15 to 20 years are films I have produced myself.  Then I put my book out that ended up being a New York Times Best Seller. Self-reliance is an necessity in my world.”  When asked about radical self-expression Feldman says, “just look at my outfits, album cover, my videos or anything. I think it is pretty clear where my self expression is at, “pretty damn expressive”. I have always felt that dressing is an individual statement.  We can put on whatever we want as our art for the day.” 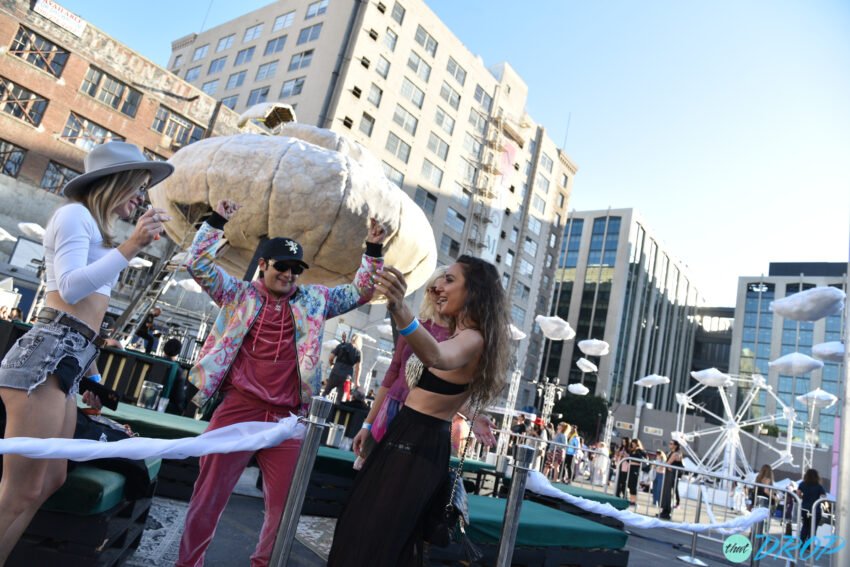 The photographer for the day Arash Afshar of the Burner Podcast shared about his first impression of The Fluffy Cloud at Burning Man 2019, “The cloud drew people in to see, “what is this interesting art project” and when you get there it turns out there is a super dope DJ set and the sound is spectacular. For me and whoever I talked to about it, it really just hit all the marks about what we are looking for at burning man.” Enjoy a photo tour of The Fluffy Cloud in downtown LA. 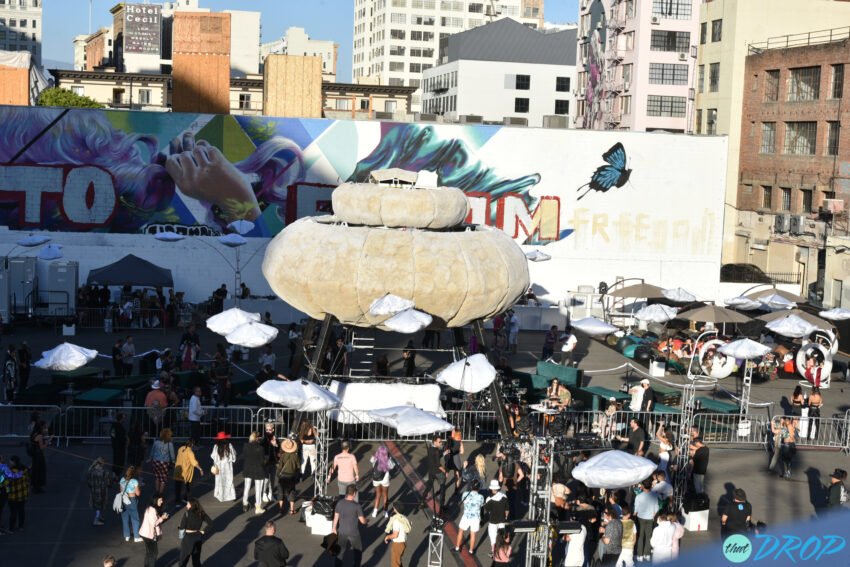 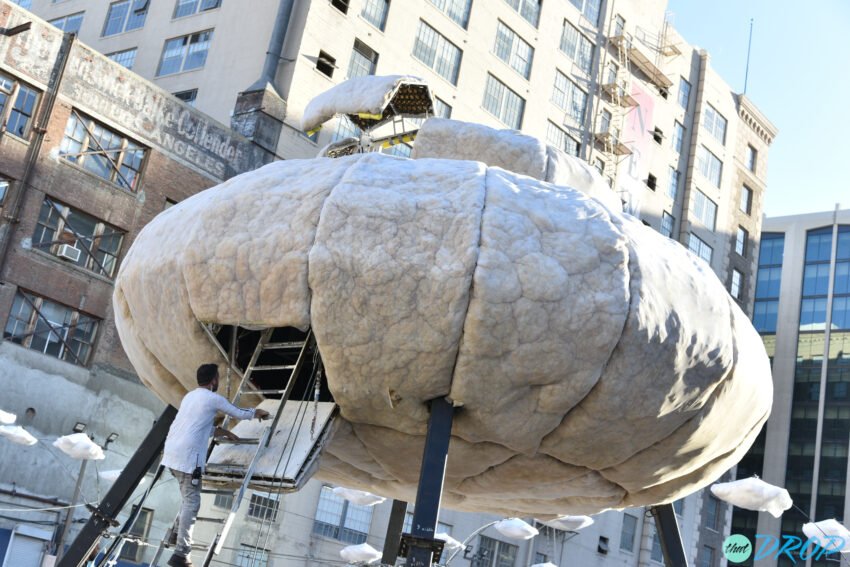 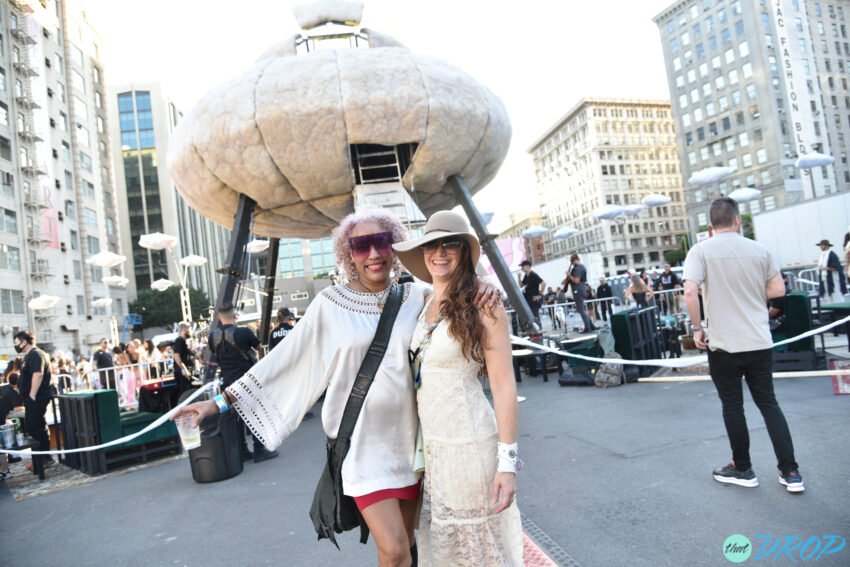 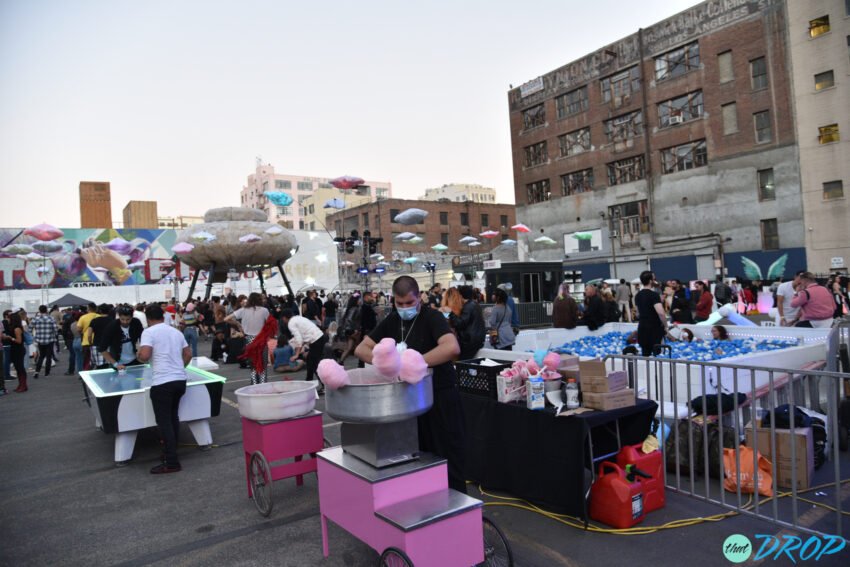 Taking a step beyond the music there was cotton candy, a ball bit and immersive games to break out the smiles, making everyone feel like a kid again. 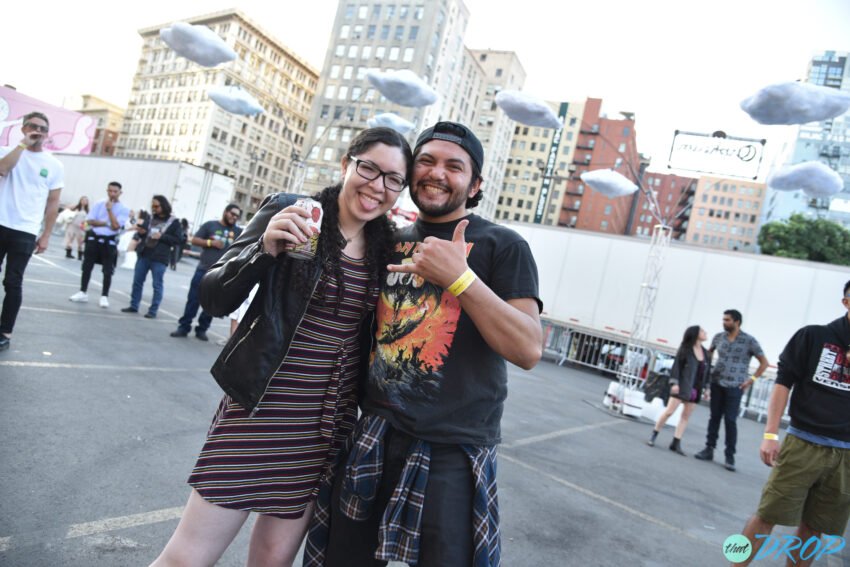 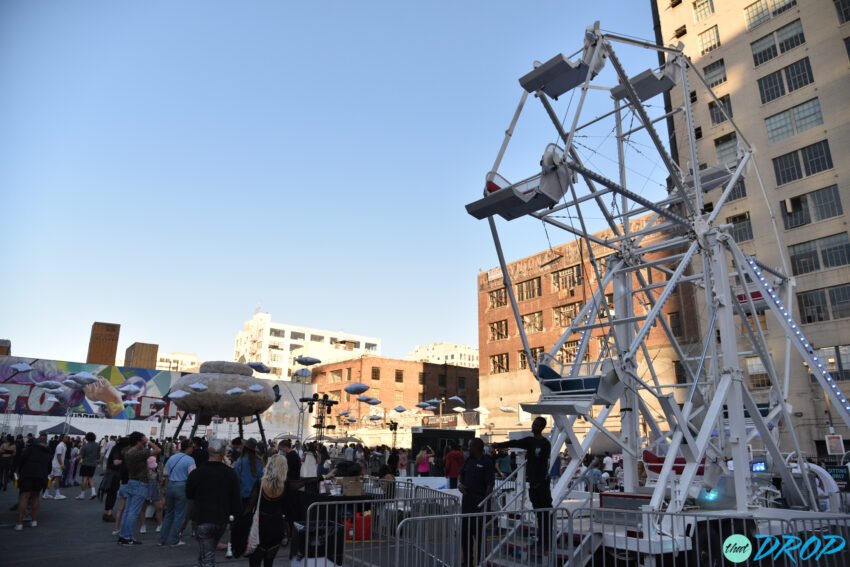 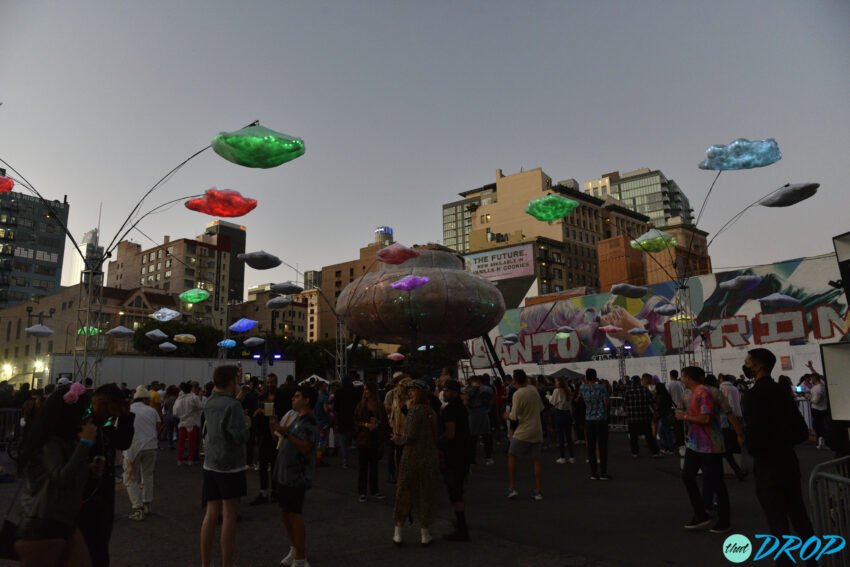 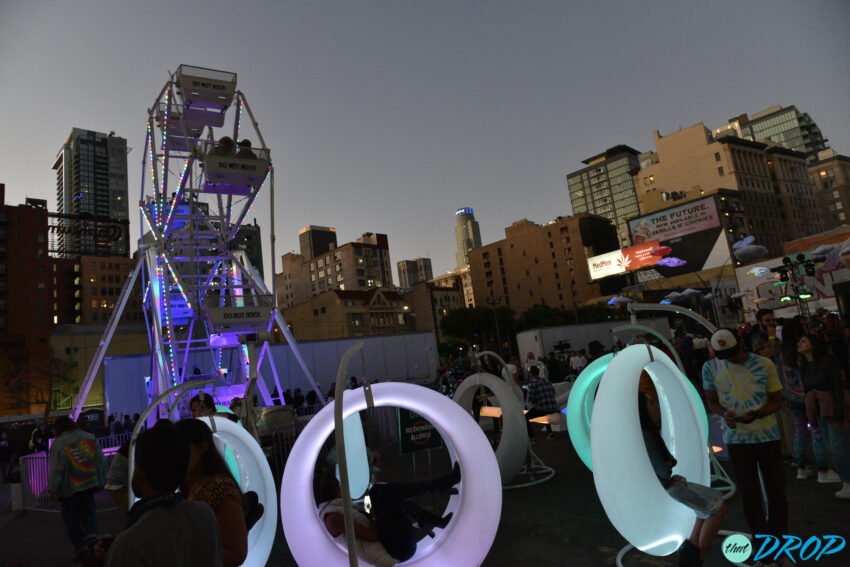 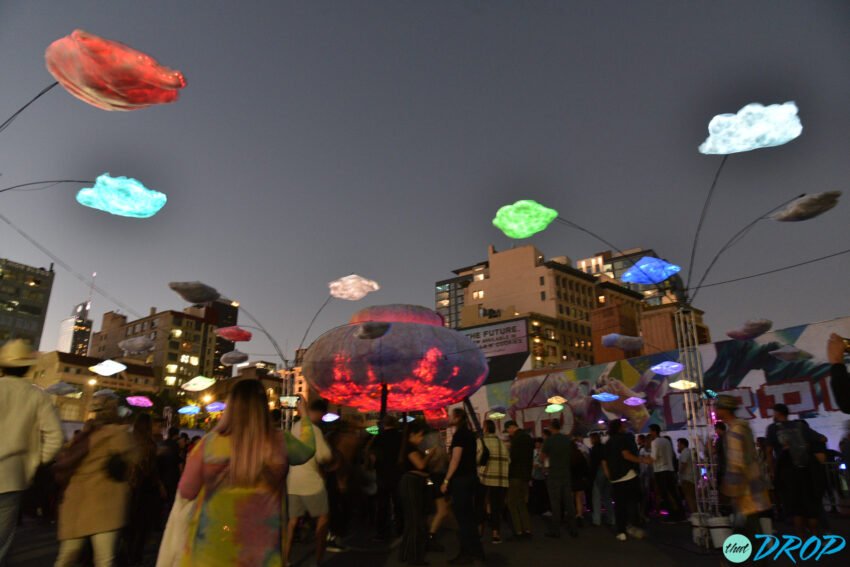 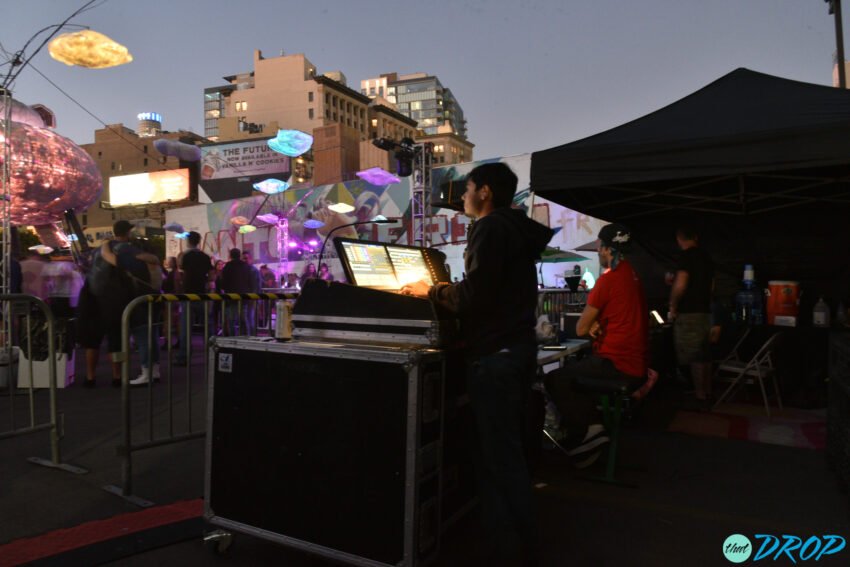 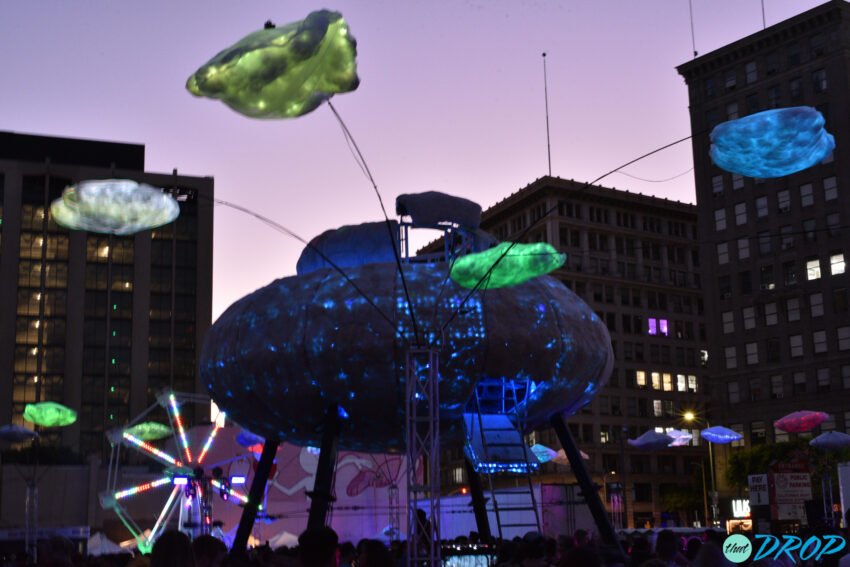 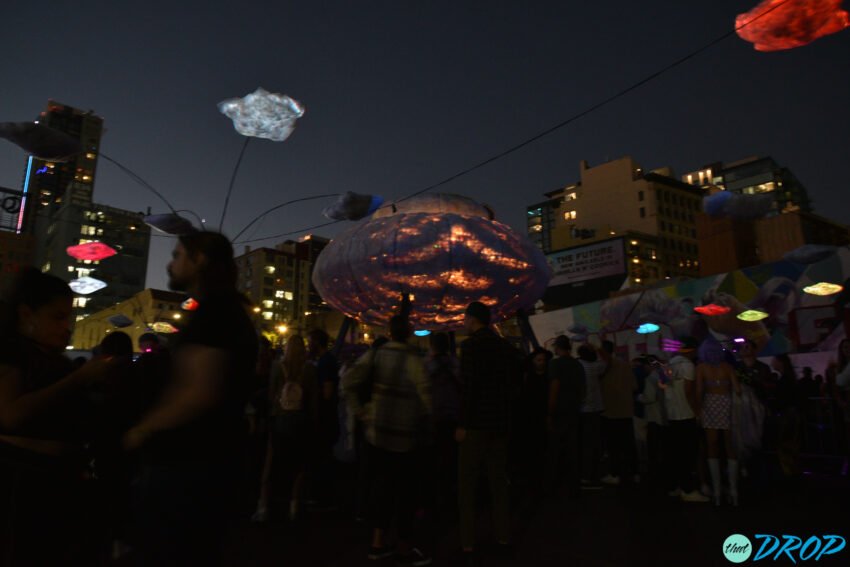 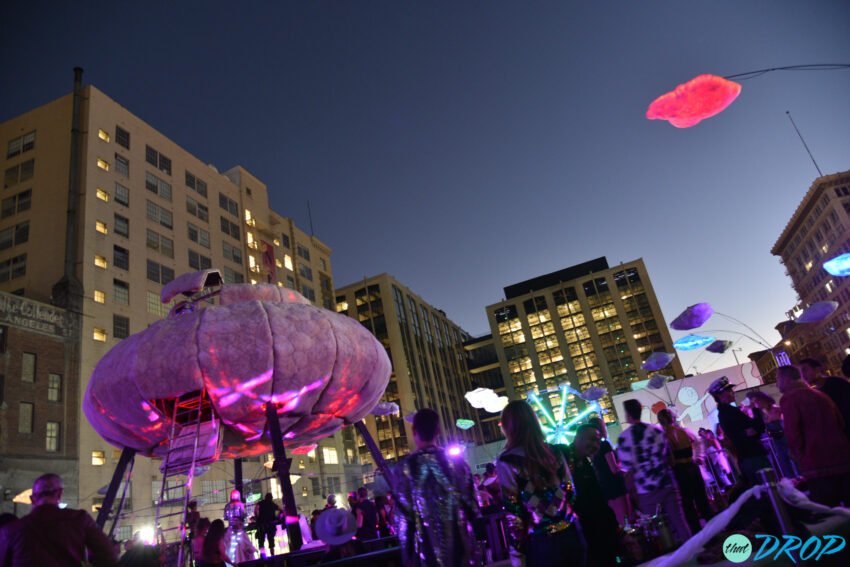 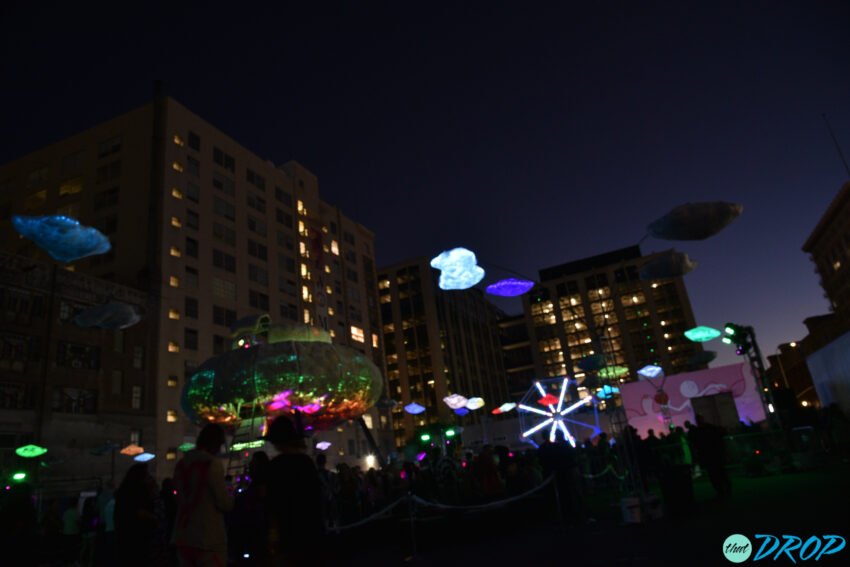 The makers of the cloud share on their vision, “The Fluffy Cloud is a radical re-imagining of what a live sound and light experience can be. It is simultaneously a major-scale installation artwork, as well as a full-fledged festival-grade performance stage. It is also now alive in the virtual multiverse. There has never been anything else quite like it. We do it because we want to make magic for people. We do it for the look of wonder in people’s eyes as they experience something unlike they’ve ever seen before. For the smiles. The laughter. The tears. The love. We do it for our community. Along the way, we hope to be able to use the Cloud as a force for good, bringing people together and creating special experiences where we can use to teach the the 10 principles of Burning Man.” 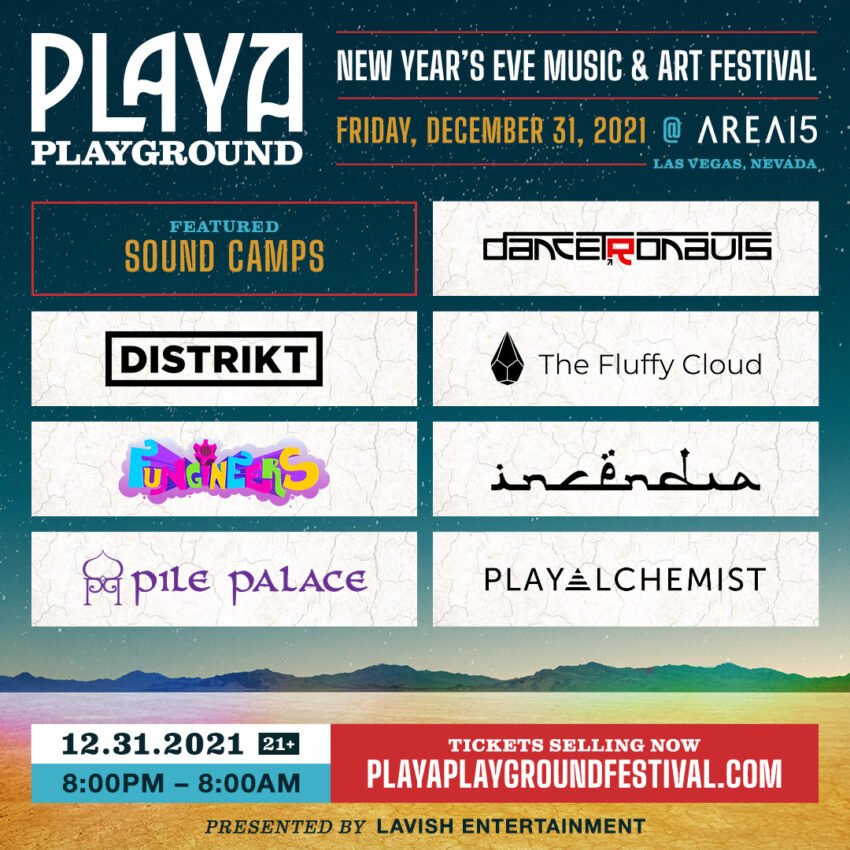