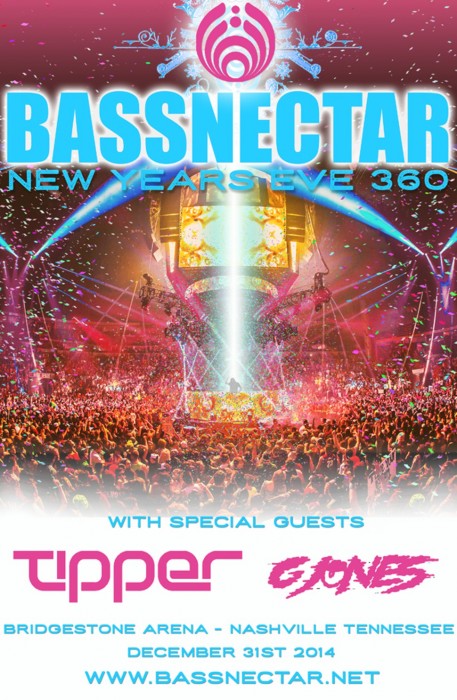 It was New Years Eve 2014 at the Bridgestone Arena in downtown Nashville, Tennessee and a mob of bass heads patiently braved the cold, awaiting the fourth consecutive sold out Bassnectar NYE 360: an immersive, 360° live performance from a bass music legend.

A mere 50 yards away the bright lights of Downtown Nashville sparkled among a lively strip of restaurants, watering holes and shops that lead to the nearby Cumberland Riverfront. Country bars, boot shops and some of Nashville’s most historic and well known music venues sat just a few steps away.

Country music echoed through the streets as we waited; the thrill of hearing loud music started to set in. Frigid temperatures ceased to bother with the lure of the bass only a few, fleeting moments away.

A 14-hour, all-night drive was complete and the crew was amped to experience Bassnectar in his element. His shows on New Year’s Eve 2011, 2012 & 2013 at the Bridgestone Arena sold out, drawing a legion 13,000+ Nectar craving bass aficionados. 2014 was no different.

Madness was ahead and the feeling was palpable.

For the few not already familiar, Bassnectar is one of the most respected and longest standing artists in American electronic dance music. With over 20 years of original production under his belt and aggressive touring since 2005, he has solidified himself as a cultural icon and music legend. Not just to bass music fans, but also to millions who have experienced his music and live performances around the world.

This event was a pilgrimage that would inaugurate the new year in prime fashion and could not be missed.

Below are 10 reasons why Bassnectar NYE 360 was the ultimate bass experience: 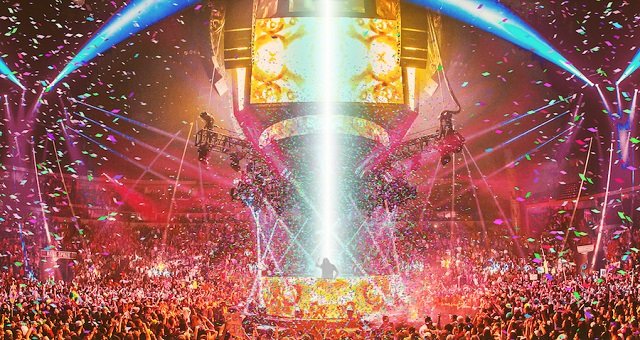 1. Simply Put: This Guy Throws Down

110% across the board. Just last week Bassnectar performed at Decadence Music Festival in Colorado and twice at Basslights (with Pretty Lights) in Virginia. These shows were on the heels of a sold out Madison Square Garden performance, a brand new album (Noise vs. Beauty), an intense touring circuit that blanketed the United States, dozens of music festivals and some International shows.

Needless to say, Lorin has proved himself as one of the premier acts in the industry and his work ethic is evident by everything he does.

2. Experiencing as One: The Unique Intimacy of Bassnectar Shows

After experiencing Bassnectar in various settings over several years, one develops an appreciation for his unequivocal way of making his live performances very intimate and personal despite the venue size, attendance and magnitude.

In most festival settings where it’s easy to feel disconnected from the artist, Lorin seems to always find a way to keep us all moving and focused as one.

It is almost as if the performance demands our complete attention; and if we oblige… facemelt.

It requires considerable effort from both sides, start to finish, but together it creates magic. The show has you fulfilled and the dancing leaves you exhausted, knowing you put it all out there for the experience. 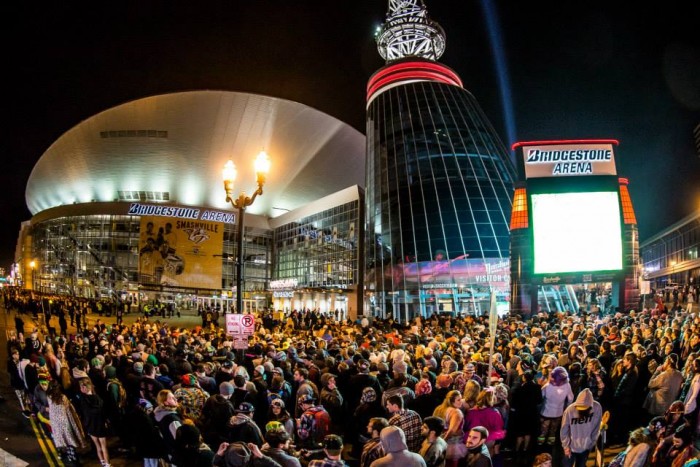 The energy was palpable as the crowd waited for the ultimate bass throw down. Photo via Facebook/Bassnectar

The venue was in a great location, politely staffed, well organized, clean and quite boss. For music performances, an arena setting tends to be less desirable and a more difficult venue to enjoy: mainly due to less personal space for dancing, sometimes awkward and random positioning of the stage and production, and the presence of seats.

In this case the experience was overwhelmingly positive, with every detail meticulously refined to perfection. Quality was apparent everywhere, especially in the production, before Lorin came and absolutely smashed it.

The show called for paper tickets. Although a bit cumbersome it added nostalgia, providing a tangible memory of the evening. Tiny details like this make a difference, especially in a digital world where the majority of events have transitioned to e-tickets.

Flawless sound engineering left bones rattling. Stacks upon stacks of subs and speakers facing every angle made it evident that extensive care and investment went into perfecting the sound. A centrally positioned, rotating stage with a direct view from all angles created an intimate viewing experience of the master at work. A brilliant perspective allowed Lorin to be seen dancing behind the decks, crafting, experimenting and continually creating magic.

The staging was ideal in that every bass head was visible at all times, creating an unconventional experience. When the lights illuminated the crowd, even for a split second, glimpses of smiling faces could be seen on thousands of members of the Bassnectar Family while we danced and celebrated in unison.

Dozens of staggered screens complemented the visuals, providing more of a sensory impact. It seemed as if the Bridgestone was built for Bassnectar. 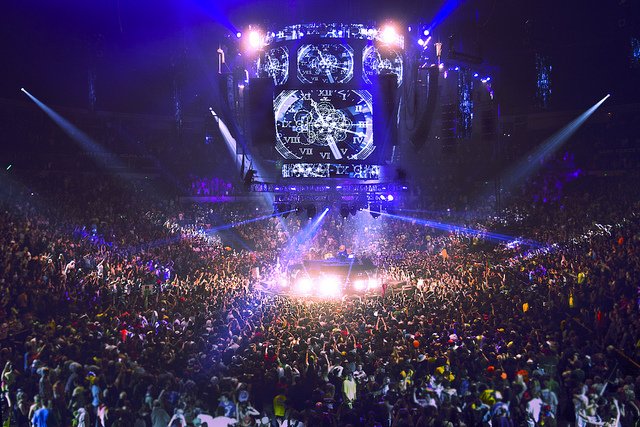 It seemed as if the Bridgestone Arena was built for Bassnectar.

What was especially enjoyable is what we will affectionately refer to as “The Nectar Moment“.

The Nectar Moment is the split second following the rush of that first Bassnectar drop, mid shuffle-step and head nod, when the entirety of your peripheral vision is people going absolutely ham.

The bass-fam is throwing down, wobbling, weebling, headbanging, dancing insane and enjoying bass to the face in a brief climax just before things get delightfully weird and as heavy as the brown note.

At this venue, the unique setup was conducive to a massive “Nectar Moment.” Glimpses of the entire crowd enthralled with the music could be seen at any time. The scene was akin to 13,000 wacky, flailing arm, inflatable, tube men in a hurricane.

While each offers provides a uniquely awesome setting to experience Bassnectar, the arena vibe is much different than that of a festival. Bassnectar NYE 360 was filled with a dedicated fan base who was wholly invested in the moment, united from varying geographical points like a star of influence.

Each person we met had traveled hours from a different direction, investing considerable time and effort to come and smash.

Everyone was a die-hard Nectar fan. Not a single person stumbled upon this set randomly at a huge gathering. Bassnectar insignias could be seen inscribed on countless Grassroots hats, shirts, tanks, pins, body parts, and backpacks.

A fellow member of the festival family once said:

That is exactly what Bassnectar NYE 360 was. Two and a half hours gave Lorin time to experiment, play and cover a whole spectrum of sounds.

The set list varied from NVSB bangers, a beautiful acoustic performance of “Butterfly” with Mimi Paige and “Open Up” to name a few.

The first moments of 2015 rang in with Frank Sinatra’s “That Old Black Magic”, reminding us of a simpler time in music and the beauty of the classics, which quickly transitioned into Aphex Twin’s 1999 single “Windowlicker.”

8. Unity & Respect for the Bassnectar Family 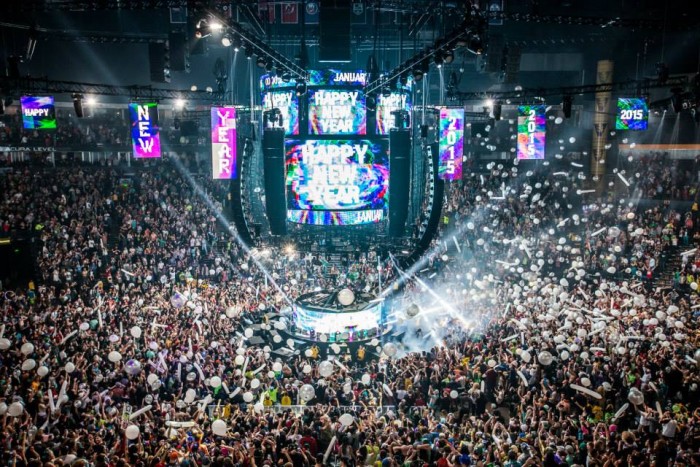 It seemed that everyone took a moment to glance at their crew and embrace the incredible moments they had shared with these beautiful souls over the years. Photo via Facebook/Bassnectar

After midnight, a slideshow of all the Bassnectar family photos from 2014 took over the screens and that familiar nostalgia of life and a new year hit home. It seemed everyone in the house took a moment to glance at their crew and embrace the incredible moments they had shared with all these beautiful souls over the years.

Identifying tracks during a live set can be difficult, especially when mixed, mashed and fully immersed in the experience. But whatever was playing in the last minute of that performance was something that is tough to forget.

It felt as if the entire show condensed into one final bass line, eloquently laced with a filthy West Coast wine that prompted an immediate lean back, 2-step, and nearly 2 minutes of stank face.

If anybody knows what this track was, please post it in the comments. 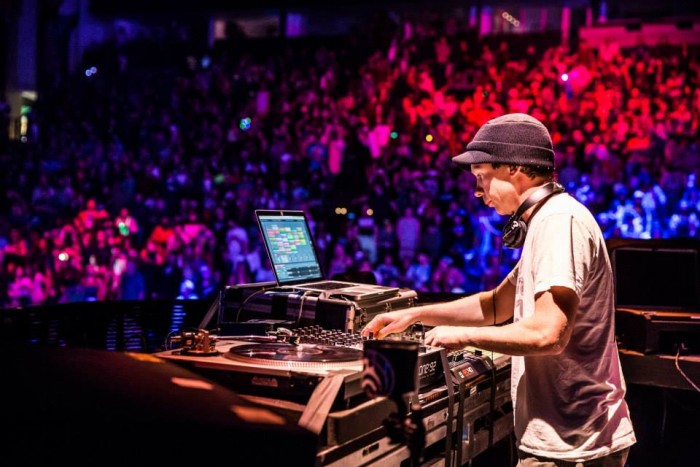 Tipper is a wobble-master who put forth an old fashioned throw down, exactly like you would expect from a veteran composer.

With supporting acts from bass pioneer, composer & producer Tipper and West Coast up-and-comer G. Jones, we knew the opening acts were not there just to kill time. Tipper is a wobble-master who put forth an old fashioned throw down, exactly like you would expect from a veteran composer.

G. Jones, on the other hand, hit the stage without expectations. We had heard prophetic tales of past performances including what was highly regarded as one of the best sets at Shambhala, but still didn’t anticipate what was in store.

This young guy was incredibly impressive as he broke the silence in Nashville with an array of self-produced, original tracks. Bass-heavy, West Coast-y, trip-hoppy goodness. A little reminiscent of the Nectar himself, but replacing the heavy metal and punk influence with hip-hop. After the musical foreplay of G. Jones, it is easy to see why Bassnectar chose him as support.

Much love to our Bassnectar family. Glad we got to share this one with you. 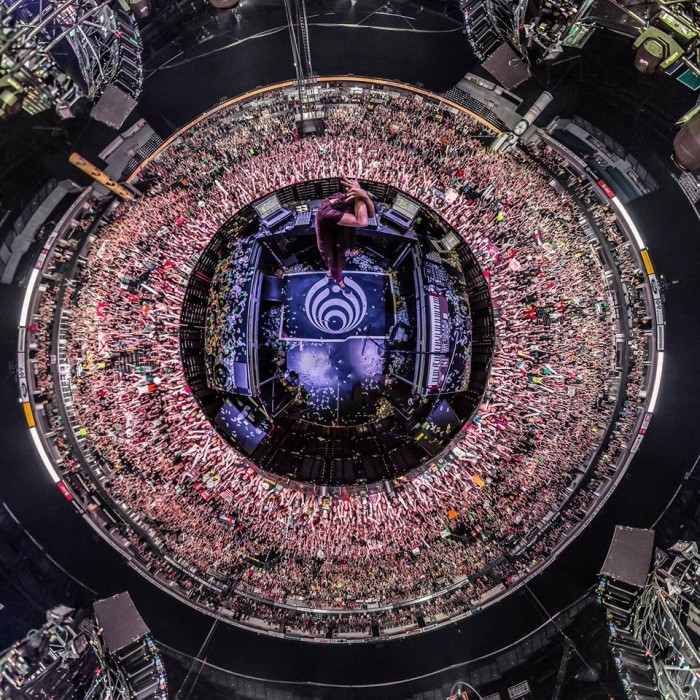