An Inside Look of Australian Producer Dimatik

Dripping in white, hard-dance pioneer Dimatik conceals his identity beneath a post-apocalyptic uniform. Today we uncover Dimatik’s journey thus far, his lessons, accomplishments, and stories on the road.

Dimatik has acquired global success in the dance music scene from his hybrid music style, releasing tracks with Dharma, Spinnin’, Smash the House, and his own production imprint Cinemtak. He’s been supported by the likes of Armin Van Buuren, Tiesto, Hardwell, KSHMR, David Guetta & more. His singles are no stranger to Beatport’s Hard Dance charts with hits like “Dragonite”, “Church of Hell” and “The People”, which have climbed to number one. “Punjabi”, a collaboration with Timmy Trumpet, received an explosion of support surpassing 100+ million plays on Youtube and Spotify alone. 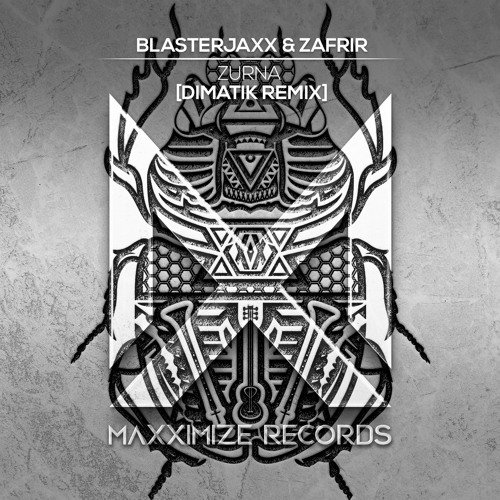 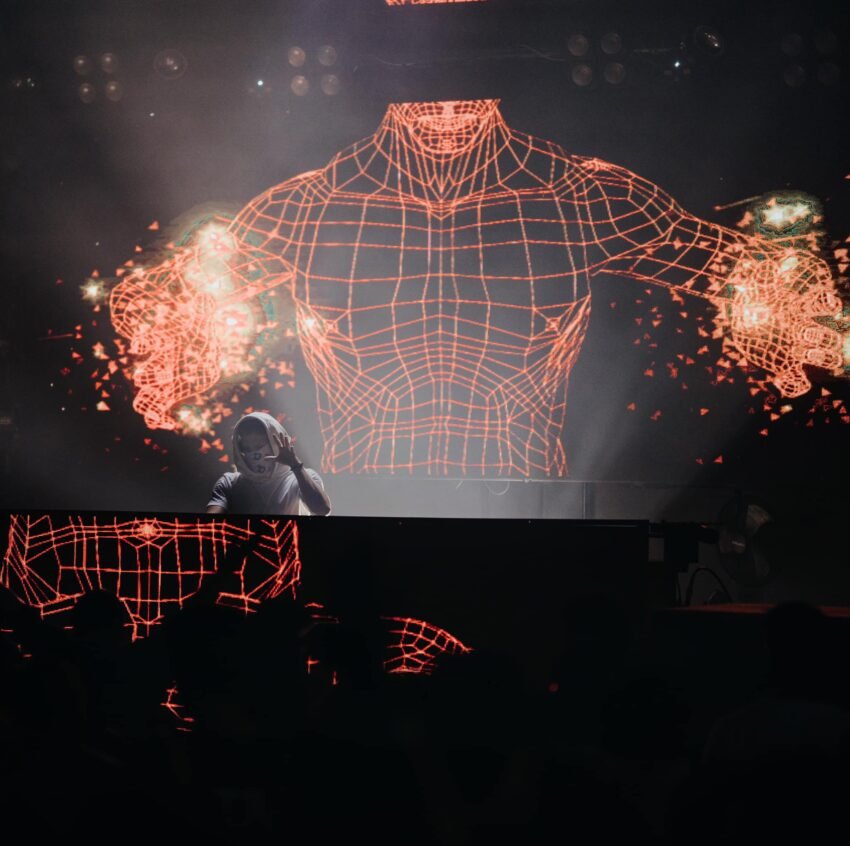 1. You’ve just released your official remix to Blasterjaxx and Zafrir’s “Zurna”… What did you like most about working on this release?

The most enjoyable part about working on this remix for Blasterjaxx & Zafrir is the amazing quality stems I was provided with, it really helps with the creative process when you have stems of such quality- awesome elements to further evolve.

2. What initially led you to the world of dance music and speciﬁcally creating hardstyle and psytrance music?

In my younger days, going to friend’s birthday parties & events is deﬁnitely what inspired me most. I use to create original songs in my head & really wanted to just learn how to make it into a real song.

3. You’ve had some groundbreaking releases that dropped into massive music festivals worldwide. What was it like to hear “Giratina” or any other tracks get mixed into live sets?

For me, it was really something special. My main memories would be the support I received on my Bootleg of Hardwell- Apollo &  the support of Giratina. I remember one morning I woke up to my phone vibrating continuously- I checked my phone and I had 100+ notiﬁcations from fans sharing that Hardwell dropped my bootleg at AMF- it was really special to me as it was the version of his own song that he played for years. Similar situation for Giratina when it was played all around the world at Tomorrowland / EDC etc by artists like Armin, Tiesto, KSHMR & more.

4. We’ve seen your impressive studio setup, how did you go about conceptualizing and planning it out? What was the ﬁrst track you made in the studio?

It’s not as crazy as a Hardwell or Ummet Ozcan studio, but i’m happy with it for now! Luckily, I have friends in all trades who were able to help execute the idea I had in mind. It took a while, but the ﬁnal result was great. I think the ﬁrst track I made in the new studio was “The Balkan”.

5. Can you share one story from the road, or while touring with Timmy Trumpet on his European Freakshow tour back in 2019?

One brief story I’ll share from the European Freakshow tour which I never want to speak about again haha- The hotel I checked into in Italy accidentally held my passport (i also forgot to ask for it back when checking out- (Jet Lag was not my friend) when I arrived to the airport to fly to Austria I realised I didn’t have my passport. It took Hours for the Hotel staff to realise they still had it & then I had to pay a taxi driver 400Euro to drive it to me from the hotel which was 2 hours away (it was a public holiday so everything was double price). Two flights later + a 2 hour drive, I ended up arriving to the venue in Graz, Austria just 10 minutes before I had to play at 8pm after being at the airport since 5am that morning! Not fun at all haha but nothing a few cafe patrons & fireball couldn’t fix! 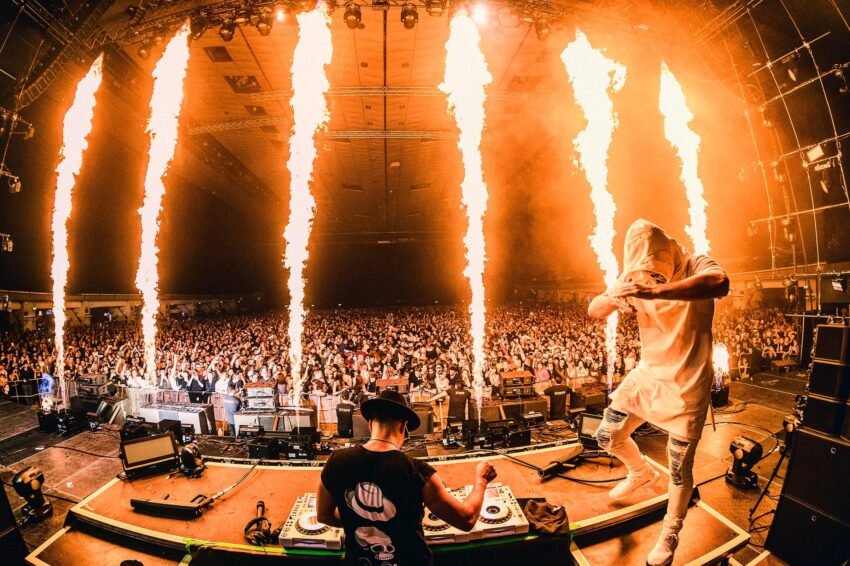 6. What can listeners expect from your live show?

7. When it comes to creating, do you see yourself more as a perfectionist or do you usually know when it’s time to “say when”?

A bit of both. Depending on the project, I really weigh up how i’m spending my time, what I’m spending my time on & the realism of if the extra time I’m spending is going to transition into whats needed. I look at it as it’s not beneﬁcial working hard, if you don’t work smart too.

8. Are there any songs or artists that you’re really digging at the moment?

Overdrive from Melbourne Australia, in my opinion these guys will be one of the strongest Hardstyle producers worldwide in the next few years. Pushing the boundaries to another level. If you listen to their track “Hallucinations” you’ll understand what I mean! They also just dropped a brand new track on my label which is called “You’re The Reason”.  One track I’m really digging is actually “Stay” by Justin Bieber / Kid Laroi- I’ve actually just completed a remix of it with my buddy from Australia who goes by the name of “Twisted Melodiez” & we actually created the whole beat from scratch, only using the acapella.

9. It’s clear that you like to give back to the community. You’ve hosted a few demo live sessions sharing feedback to upcoming producers. You also manage your own label, how do you ﬁnd the balance to manage everything?

It’s quite full-on at the moment, but obviously with minimal touring due to covid, I do have a little more time up my sleeve than usual. But, I’ll never stop giving back to the up and comers. It’s a must to me.

10. If you had to choose, would you rather be on the road performing or at back in the studio working on music?

Very hard question. I do this because I love making music, but then again playing international shows in Europe gets me majorly inspired to get back to creating. I like the balance. Maybe one day if I was married with a family, back in the studio will be my favorite, but right now I’m really loving this journey of where things are headed and pushing into those bigger live shows around the world.

11. Name one thing you learned from the past 2 years.

– When setting a goal, set sub-goals / steps so you can tackle one step at a time. I do this for everything I have and it never fails if I tackle it correctly.
– Never rely on one opportunity & never use an opportunity that falls through as an excuse to why something didn’t happen. There is always another way, if you want it enough you will and can make it happen.

12. Share anything that most fans would not know about you.

Thanks for having me 🙂

ARC Music Festival is set to take place at Union Park in Chicago, the birthplace of the house music with…