Now that we’re all finally caught up on sleep, we can try and salvage as many memories we can remember while aboard the wildest Spring Break cruise ever – Inception At Sea.

Leaving the Port of Miami on Friday, March 11, the Norwegian Sky sailed to Great Stirrup Cay in The Bahamas for two days, before returning Monday, March 14.

If you weren’t able to attend the craziest event to ever take place on a cruise ship in the history of forever, then here’s what you missed. 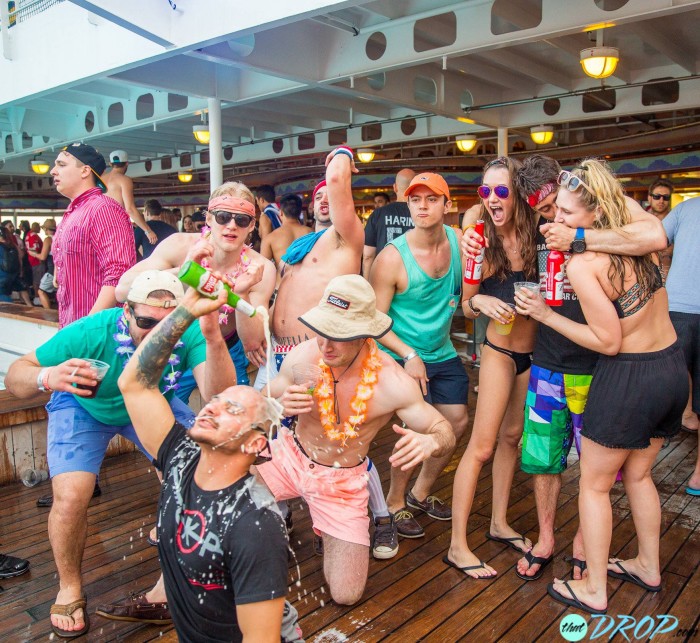 There was so much free booze on Inception At Sea, people were rolling around in it, literally. Photo by Joe Chung

When you advertise free alcohol, nobody really thinks it’s free. There’s got to be some kind of catch right? Wrong; Well, at least not on Inception At Sea.

Inception At Sea was the very first, fully charted, all-inclusive Spring Break cruise, which essentially meant, “You could party as hard as humanely possible, without having to spend one single penny while on board the ship.”

From the second you boarded the ship until early Monday morning, when you were being kicked off, you were able to drink whatever you wanted, whenever you wanted and as much as you wanted for an entire 72 hours.

And boy did they… 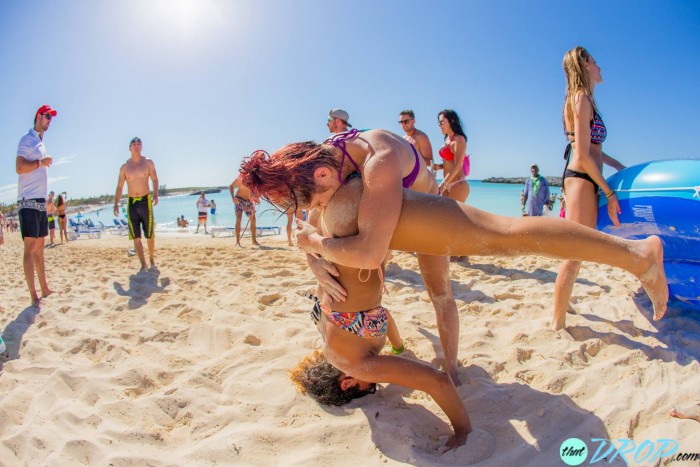 A picture is worth a thousand words, especially during Inception At Sea. Photo by Joe Chung

With that much alcohol on board, it almost goes without saying that some wild, crazy and unspeakable antics occurred while on board Inception At Sea.

When you combine 2,500 college students, Spring Break and a cruise ship filled with unlimited alcohol, you get (put simply and rather nicely), one hell of a party.

We’ll go ahead and do everyone a favor by just leaving it at that.

Partying in The Bahamas 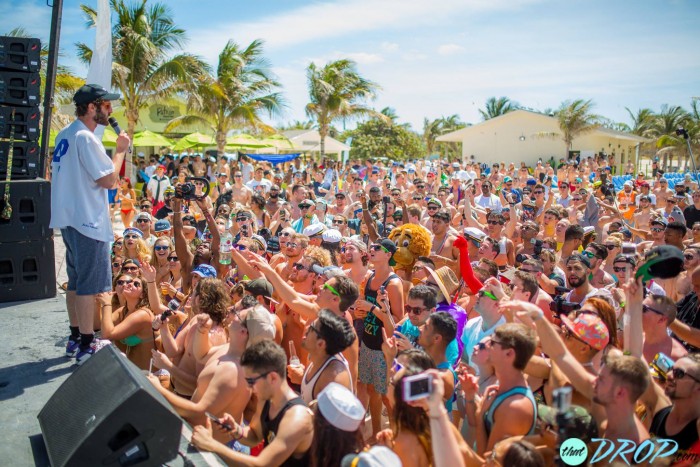 Lil Dicky performs in the Bahama’s during Inception At Sea. Photo by Joe Chung

No doubt one of the best parts about Inception At Sea was partying in The Bahamas.

After a nice little boat ride from the vessel to Great Stirrup Cay, fans were able to experience The Bahamas in a rather unusual way; partying on Norwegian’s private island, surrounded by awesome music, hanging out with the artists themselves, all while being surrounded by the gorgeous crystal clear blue ocean.

For two blissful, perfectly sunny days, fans were able to soak up the sun and enjoy epic performances by The Chainsmokers, Lil Dicky, Juicy M, The Stafford Brothers, Escobar, Dante and more, before returning back to the boat. 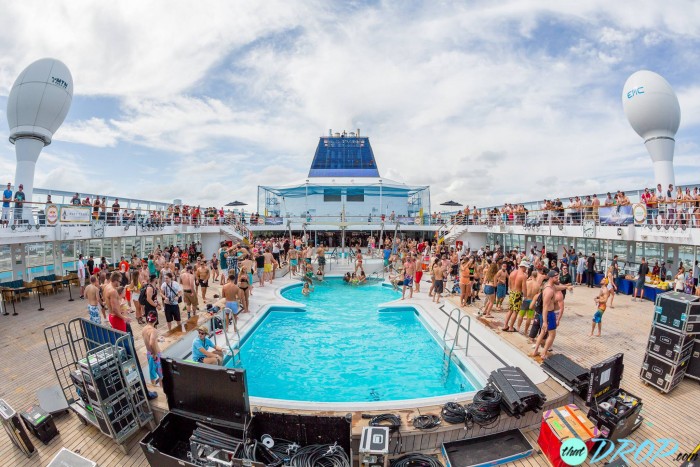 The Pool deck was definitely the place to be during the majority of Inception At Sea. Photo by Joe Chung

The Bahama performances weren’t the only one’s to rock your shirts off. On the boat, fans were immersed in 72 hours of legit, non-stop music.

Personally, my favorite place to be was outside on the pool deck.

With the unlimited open bar and all the Pina Coladas you could drink in the back, four hot tubs and two pools in the middle and epic artists performing in the front, the pool deck was definitely the place to be for the majority of the cruise. 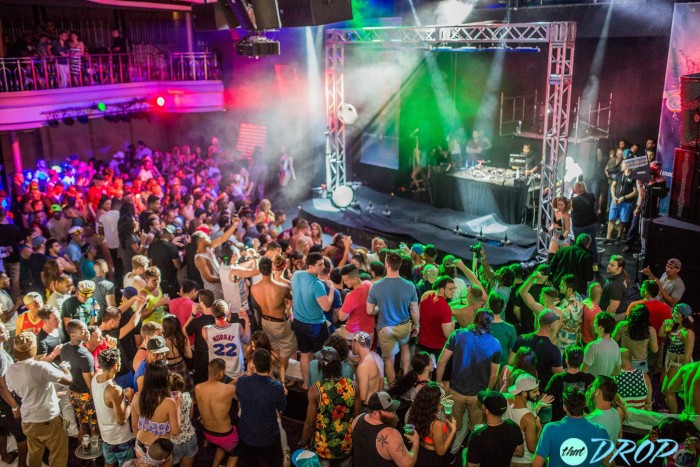 Fans gather in the Theatre to enjoy their favorite artists. Photo by Joe Chung

When the sun went down and the pool deck closed down for a bit, fans either headed to The Theatre, the Casino or Dazzles to enjoy more awesome performances.

The theatre made for some spectacular, psychedelic, eye-rolling visuals while Dazzles provided a more intimate setting, where you could either rage face or relax on the giant couches provided.

Each stage provided a different setting, but included everything you needed in order to enjoy epic music for three straight days.

Waterfall Visuals in The Theatre 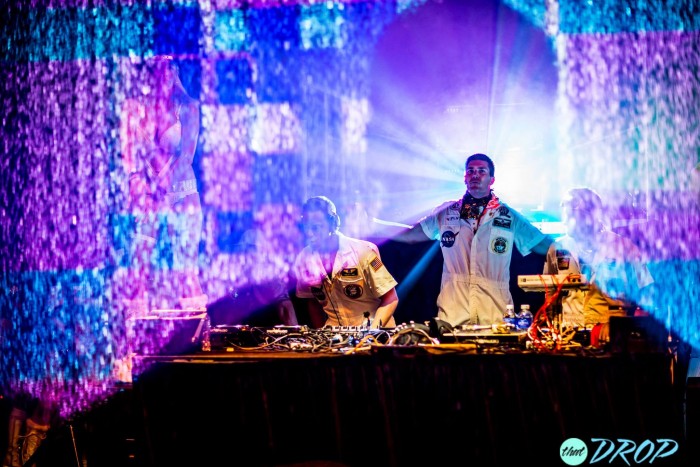 Visual effects were projected on a water wall, providing psychedelic effects in The Theatre. Photo by Joe Chung

One of the coolest aspects provided by the Visual Department, was the aqua water wall show set up in front of the DJ booth in the Theatre.

Water was dropped into a pool, which gave way for visual effects and hallucinatory lasers to be projected onto the water wall, which then created holograms that floated around the artists. This added an extremely electrifying element to an already mind-blowing show.

According to Jason Beukema’s video on Facebook, the water wall included over $6,000 worth of equipment in order to give attendees one hell of a light show.

Perfect Environment for Making New Friends from Around the World 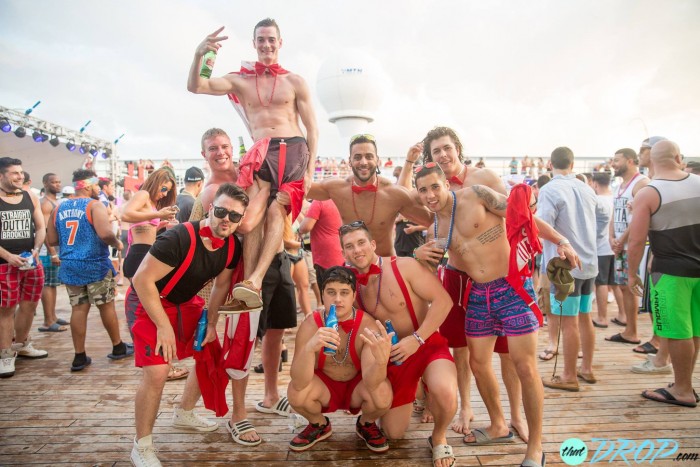 Inception At Sea was an intimate experience for everyone on board. Photo by Joe Chung

Inception At Sea was on the Norwegian Sky, a slightly smaller ship than the one on our last trip; the Groove Cruise. The 11-deck ship providing an intimate setting where you could easily make or find new friends. We met Canadians, Europeans, Australians and tons of groups that traveled long distances to celebrate together. This created a worldly atmosphere that had us boarding as strangers and leaving as friends.

Becoming a Part of History 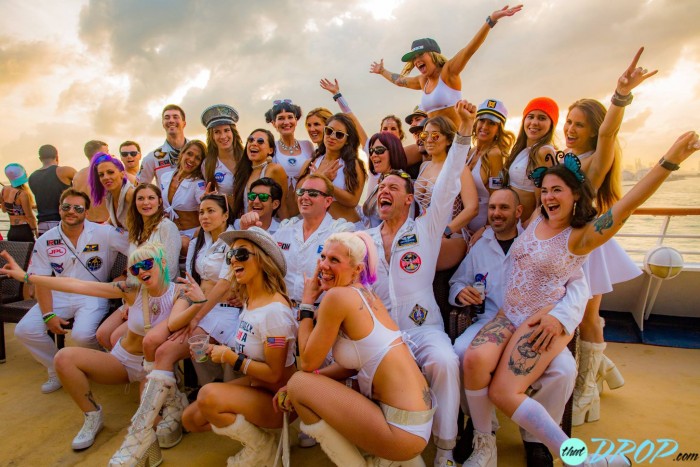 Those who attended the very first Inception At Sea became a part of history. Photo by Joe Chung

For those of you who were on Inception At Sea, let’s take moment to appreciate the fact that our livers haven’t shut down on us yet and that we survived one hell of a Spring Break Party experience.

We became a part of history, did a few things we’re not very proud of, but ultimately, had the best time of our lives.

This was the very first, fully chartered, all inclusive Spring Break cruise and hopefully, it won’t be the last. Stay tuned for more information and how you can purchase tickets for Inception At Sea 2017!

We’re sad Inception At Sea is over, but we couldn’t be more excited to attend in 2017. Photo by Joe Chung

Miami-based EDM Journalist, Writer and Photographer who believes the power of positivity can change the world. Strong focus on artist interviews, festival coverages and creative editorials. Ultimate Basshead, PLUR activist, and festival junkie with a Bachelors Degree in Photojournalism from the University of Miami.