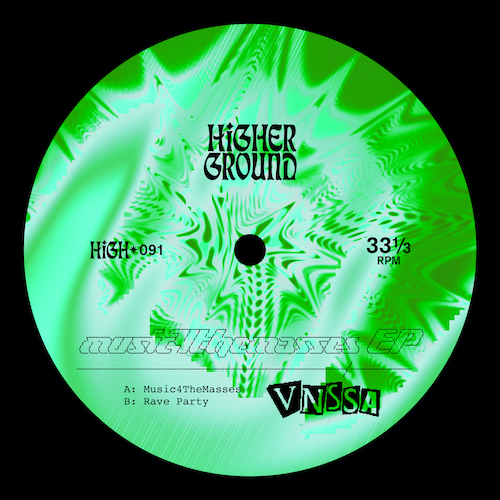 VNSSA explains: “I’m really excited to have this EP on Higher Ground. The idea behind these tracks was that I wanted to step outside of my comfort zone and make something I wasn’t hearing in the clubs. I wanted to make something different and unexpected that still worked on the dancefloor and I’m through the roof that Higher Ground liked the EP and signed it because I think it’s a great label for showcasing the unexpected.”

VNSSA’s debut single was released in early 2018 and she has since released multiple singles and EPs on labels such as Dirtybird Records, Higher Ground, Techne, Rules Don’t Apply, Sweat It Out, Realm,and Trippy Ass Technologies, including a Beatport #1 with “Word” a single in collaboration with Walker & Royce on Black Book Records/HotBoi. Catching the platform’s attention, she was later named a Beatport “Next” artist, and received further support from tastemaker platforms like This Song Is Sick and Data Transmission.

Looking ahead beyond Music4TheMasses and Coachella, VNSSA will perform at some of the biggest festivals in North America in the coming months, including Hangout Festival, Lightning In A Bottle, Bonnaroo, Electric Forest, Shambhala, Splash House, Electric Zoo Festival and Firefly Festival.