Ultra Miami 2020 will be a homecoming occasion with its triumphant return to its long-time home at Bayfront Park with a stacked lineup of world-class talent and cutting edge production, in what’s slated to be the festival’s most exciting year yet. Although, prized mainstage DJs make up the bill, you can feel the strong techno tide with the Ultra Miami 2020 phase 1 lineup.

Enjoy a hot selection of music (especially the announcement video’s unreleased ID, ‘Party In Miami’) while you learn a little about the surprise B3B set and more thrilling nuances of this year’s run. 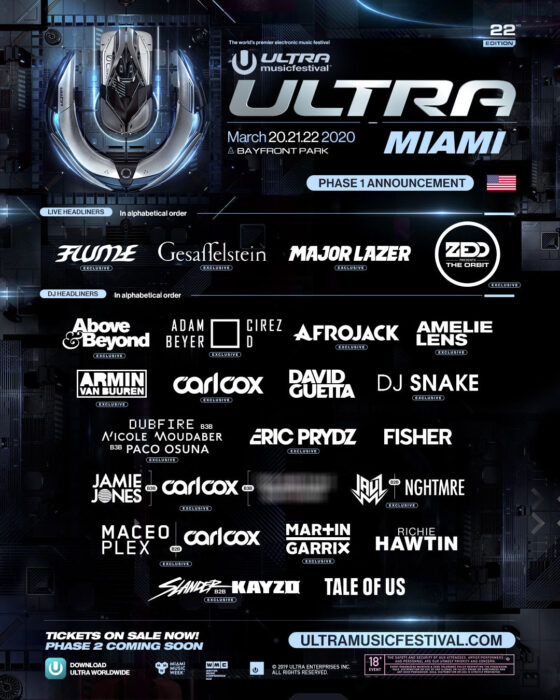 The Grammy award-winning producer who received his second Grammy nomination for Best Dance/Electronic Album yesterday for “HI THIS IS FLUME (MIXTAPE),” Flume will make his Ultra Music Festival debut as a live headliner, careening between drums, synths and a myriad of other instruments to sculpt an avant-garde soundscape on stage.

Revered prince of darkness Gesaffelstein will return to the festival’s live stage following his highly-acclaimed performance in 2014, and mark his first Miami performance since debuting his Vantablack VBx2 live show this spring which creates an illusion of infinite depth and blackness.

Genre-bending supergroup Major Lazer is sure to tease unreleased material from their forthcoming fourth studio album in their brand-new live show, which debuted earlier this year. Zedd presents The Orbit will see the three-time Grammy award-winner perform on an LED-backed orbiting structure that revolves on all sides of the producer.

The festival will be the only chance for fans to catch these top-tier talents in action during the month of March in Miami.

Carl Cox has been curating his own stage at Ultra Music Festival since 2005, and this year his iconic RESISTANCE Megastructure will expand to take place over all three days of the festival for the first time ever at Bayfront Park.

Armin van Buuren’s beloved A State of Trance will celebrate one decade of hosting a stage at Ultra Music Festival, touching down on Saturday instead of Sunday for the first time in the event’s history. ASOT has an impressive history of bringing the most well-respected names in trance music to the festival’s stage, with last year’s performers including Dash Berlin’s Jeffrey Sutorius, Markus Schulz and Cosmic Gate.

NGHTMRE and SLANDER will present a Gud Vibrations takeover of the UMF Radio stage for the first time, following last year’s show-stopping festival performance where the bass producers surprised fans with appearances from Lil Jon and Shaq. The inaugural Gud Vibrations stage takeover is sure to deliver bombastic beats and speaker-rattling production, with a full artist lineup to be revealed soon.

With a Phase 1 lineup bursting with world-renowned talent, exclusive performances, debut appearances and a multitude of back-to-back firsts, Ultra Music Festival promises to once again deliver an unparalleled electronic music experience to fans from around the globe.