In a land of mystical legends and astounding beauty lies a psytrance music festival named, TRIPAICURA. Right outside the main ports of Northern Patagonia the cities Puerto Montt and Puerto Varas, you will discover Lago Rupanco, a vast lake surrounded by volcanos, where time seems to stand still. Once you see the waterfall, turn right up the road to discover La Comark, the location of the intimate 3-day international psytrance music festival.

The commencement didgeridoo sound off, calling in characters that live in the surrounding wild…

With artists from Serbia and Brazil to Chile and Argentina, the spectrum of sound stretched wide. 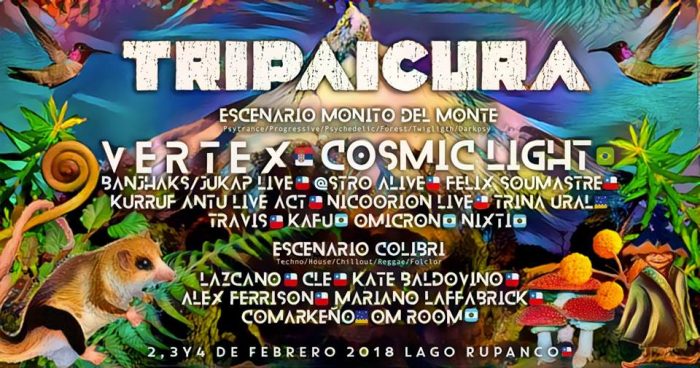 Day one consisted of getting to know people, from the artists, like Nicoorion and Emicron to the festival producers, Frodo and Chancho Volao, as well as many travelers from South & North America and Europe.

Everyone had an contagious positive energy about them and strong presence, making the festival better in their own unique way. As the cook Conejo (Rabbit) from, Concina Real, prepared fresh salmon ceviche, house music was being played on the patio stage with huge subs and hot tubs.

Listen to Nicorion’s remix of CloZee:

As we explored the grounds, we discovered the main stage built of tree limbs, leaves and hand-crafted structures, creating a spiritual and exotic atmosphere.

There was a camping section and a couple houses for people to sleep, for at least a few hours a day. This would be a weekend that you plan on getting about 4-5 hours of sleep from 7am-12pm, right after sunrise and right before it gets too hot to sleep. Remember, as the Fonder of Sonic Bloom, Jamie Janover once said, the key factor to having a successful festival “strategic sleeping.”

As anticipation to switch over on the main stage rose on night one, people lounged to gaze at the Milky Way galaxy that was vibrant from the grounds. Then BOOM, the psytrance commenced for nearly 2 days non-stop and the music just kept getting better and better and betterrr.

Night two brought out the headliners, Vertex and Cosmic Light.

The Serbian Producer, Vertex, took us on a journey through space and time, as he showed impressive control over the rapid, psytrance 135+ BPM tempo, switching beautifully from piecing trance beats to airy, dream-like sounds. Take a listen to his ‘Hidden Harmony’ and keep up with him on his SoundCloud.

To really set the tone to what psytrance is all about, Imaginarium Artes performed at mystical times during various sets.

One of their acts portrayed, two futuristic women (one topless) meeting a barbaric man with a fire staff and magic dust. They greeted him with water and connected on a beautifully, primitive level. Their ritual art consisted of fire spinning and engaging with festival goers, giving the festival a immersive touch to truly welcoming us all into the psytrance realm.

The next MAXIMO DJ was Brazilian Producer, Cosmic Light, who guided us through the cheeky hours of the morning.

Listen to Cosmic Light – ‘The Light’:

In a moment of meditation, the name came to Ale Moreira, Cosmic Light! He is inspired to create the sound of today that evokes mental expansion. As he took us on a journey of cosmic image by psychedelic music, we let go. There was no escaping the trance he threw the crowd into. Before he headed back home to Brazil, he stopped at a psytrance festival by Santiago called, Montemapu Festival.

There is a beautify scene that is growing out here in southern Chile and stretching into Argentina. It was an honor to be welcomed into that intimate gathering, where utopia existed for a least 3 days… They hope to see you there next year.

As EDC Las Vegas quickly approaches, we thought it would be helpful to put together a camping checklist to ensure…

With a little over a month left until Firefly Music Festival kicks off at The Woodlands of Dover, Delaware, it…