From past years we have learned Gold Rush is full of treasures. Hence, without question this year we strapped on our cowboy boots, packed our shovels and set out to explore Gold Rush 2018. From Illenium’s full band performance to the amazing people in the crowd, the Rawhide Event Center was full of treasures.

Take a virtual tour with us to hear and see all of what we discovered at Gold Rush 2018.

Saturday we were kissed by the sun as Codeko played a party starting 4 PM slot. Once the Cambridge Alumni took the microphone, cries for marriage proposals slipped from girls and boys lips… Not going to lie, even my heart skipped a beat when we heard that accent. Listen to his single, ‘Woke Up’ that hit #1 on SoundCloud’s dance music charts.

Slushii and Chris Lake were on-point. Then, Deadmau5 closed the night throwing us back to high school- the reminiscing was real. No comment on the Slushii and Deadmau5 buzz…

Although, I did not get pelted by Steve Aoki‘s cake like I have dreams about, his set was super fun.

Waking up to clouds and rain are fun, but a day-breaker for festivals. With a hefty lineup for Sunday, we were all on edge waiting for cancellation updates. Thankfully, when Relentless Beats says rain or shine, they mean it.

We can’t talk about the final day without mentioning again Illenium’s live set- that shit was crazy! Videos of guitars being smashed went viral real fast. Also, whoever had the totem with a black tiger on top of a washer during the Black Tiger Sex Machine set deserves 10 gold medals.

Alongside the bigger names, there were plenty of underground gems in the lineup. 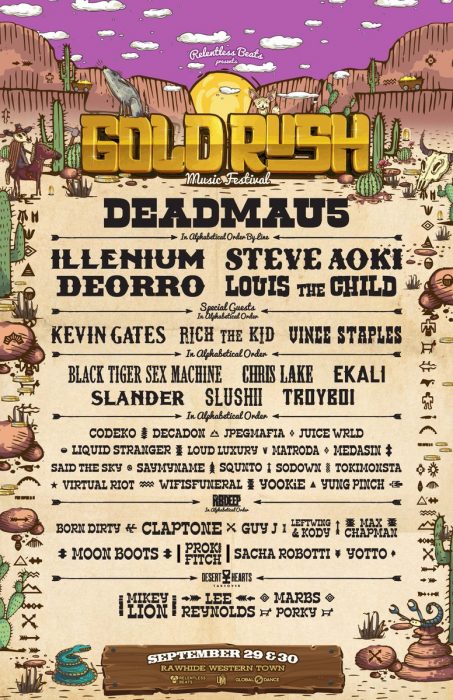 Louis The Child, the Desert Hearts Takeover, and the Berlin legend himself, Claptone were all magical sets. Us, along with many others, had our eyes opened by the newer talent. Denver’s, Decadon proved to us that you can collab any two genres despite how contrasting they are! For those of you who have music criticizing parents, show them Decadon because he might have some Rock ‘N Roll tunes that they might be more familiar with.

Louis The Child ‘Shake Something’:

We’ve seen DJs shuffle before, but Troyboi brought it to the next level.

As always, we left Gold Rush rich AF! Rich in love, rich in memories and rich in rave candy.  Relentless Beats proved that nothing, not even a day-full of rain, can stop the party. Until next year fam!

Keep up with the latest Relentless Beats events on their social media handles linked below. Next big one at the Rawhide Event Center will be Decadence Arizona! 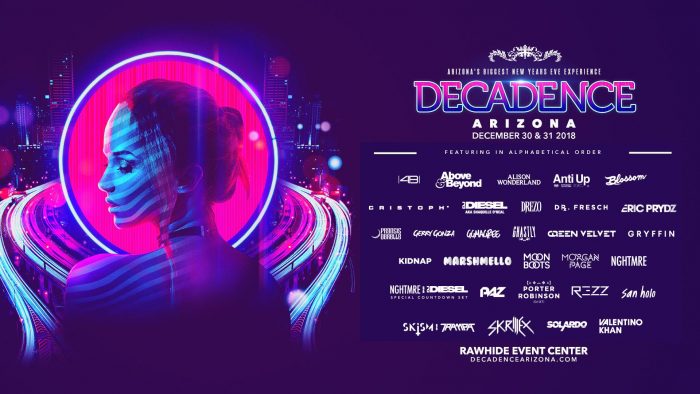