The 21st Chapter of the Shambhala Music Festival Story 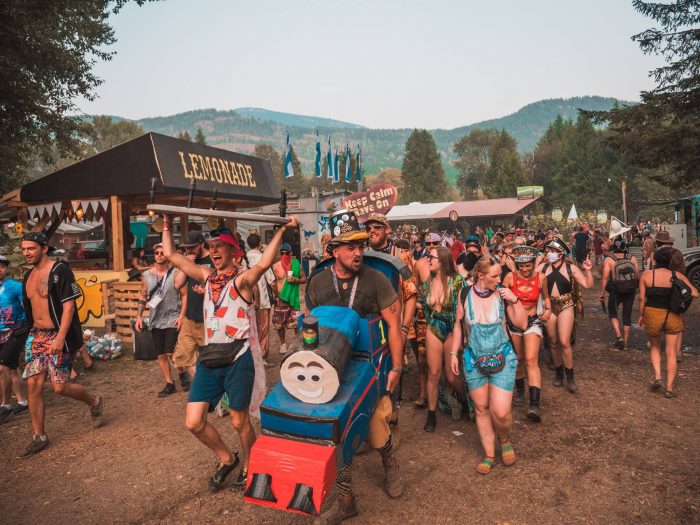 After 21 years, Shambhala Music Festival 2018 welcomed thousands of attendees back home for another eye-opening experience at Salmo River Ranch, BC on August 10 – 13, 2018. The music and art festival offered an eclectic music style ranging between bass, funk, soul, breakbeats, techno and house. This year the festival brought a variety of underground producers to world renowned artists such as: Christian Loeffler, Liquid Stranger, Fisher, Rezz, A.Skillz, Justin Martin, ill.Gates, Claptone to name a few. The music was only half the experience of Shambhala. The incredible stage structures, visual production, and high-spirited souls that gathered all added to its euphoric atmosphere.

Each stage had its own scenic charm that evoked a refreshing feeling upon entry.

Shambhala was equipped with six spectacular stages that offered a wide range of music. Fractal Forest, Pagoda, The Village, AMP, Living Room, and The Grove were conveniently just out of ear shy, allowing anyone to hop from set to set instantly, as if to teleport. The giant sized doorways at each entrance resembled portals that led you into a new realm of music, energy, and scenery. 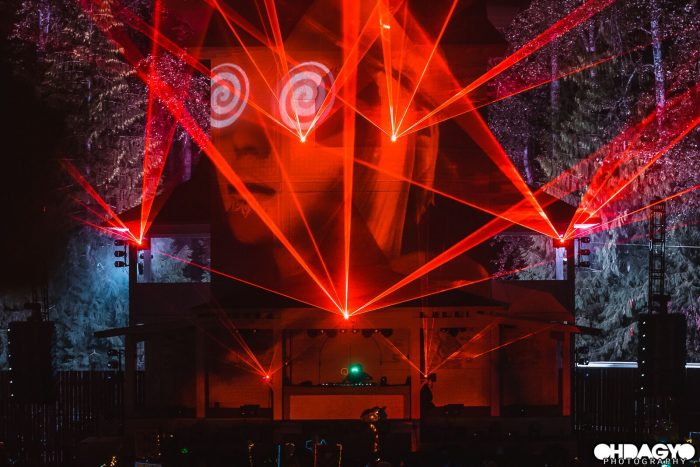 Rezz at Pagoda Stage – Photo by Oh Dag Yo

The Pagoda stage was a large house structure that coincidentally welcomed a slew of house producers to perform on Friday evening. Tech-house prodigy Fisher shook up the dance floor with thumping beats and his latest anthem “Losing It”. Dirtybird’s favorite brothers, Justin and Christian Martin, each took the stage separately Friday night as well. Claude VonStroke controlled the dance floor, weaving Shiba San’s “Don’t Talk” seamlessly through the end of his mix.

Other nights, the Pagoda stage saw bass heavy and mind-blowing sets from Adventure Club, Black Tiger Sex Machine, Feed Me and more. Rezz’s visuals transformed this house-like structure into a haunted mansion. Eerie scenes from her “Relax” video were perfectly displayed over the stage. Shadows of white light shined upon the background amongst the trees, resembling strikes of lightning. 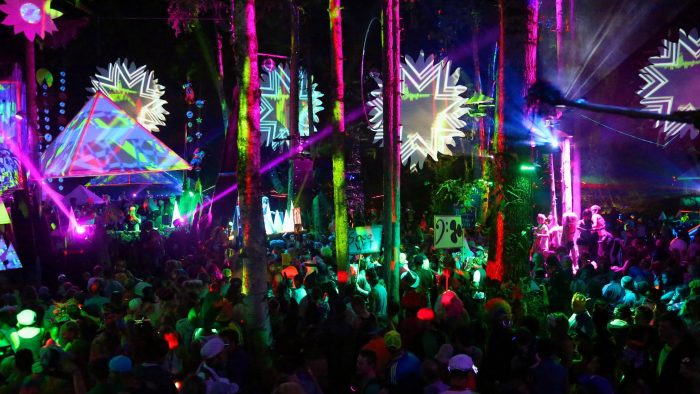 Large hand-painted faces of Yoda, Chewbacca, and C-3PO centered around the stage. Fractal Forest offered a variety of breakbeat-influenced music that teetered off into other genres of funk, trip-hop, UK garage and bass. 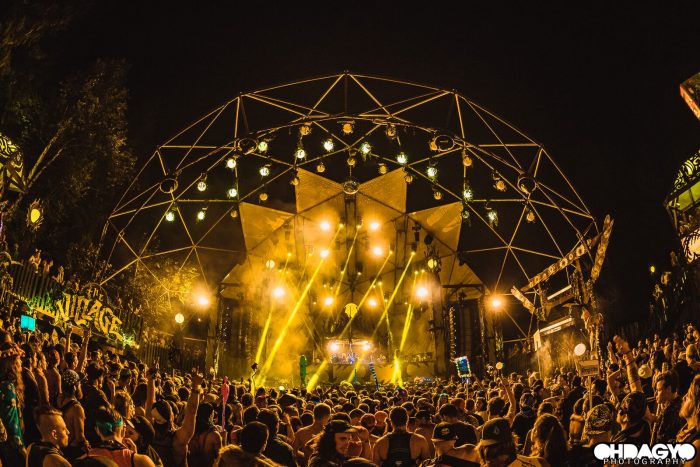 The Village – Photo by Oh Dag Yo

The Village had a half-dome shaped structure that hovered the stage, hung with floating, glowing bulbs. Catwalks surrounded this tiki themed town giving attendees a better glimpse of the scene from above. The Village housed wobbley bass sets by LA based producer Stylust, vomit-step originator Snails, Dirt Monkey, Boombox Cartel, ill.Gates, Delta Heavy, and others. The Glitch Mob played a mix of their classic tracks as well as new music from their See Without Eyes LP. The trio played an unforgettable DJ set that blew ears away.

AMP was complete with body vibrating subs that showcased a variety of experimental and liquid dub music. AMP featured theatrical dancers that added a unique flavor to the stage with their locking movements. Freeform bass-master Liquid Stranger, psychedelic dub creator Space Jesus, rising bass producer Whipped Cream, Mr. Carmack, and Woolymammoth all graced the stage for the weekend and sent vibes to new heights. On Saturday night there was even a 1985 Label Showcase that featured old school beat stylists. 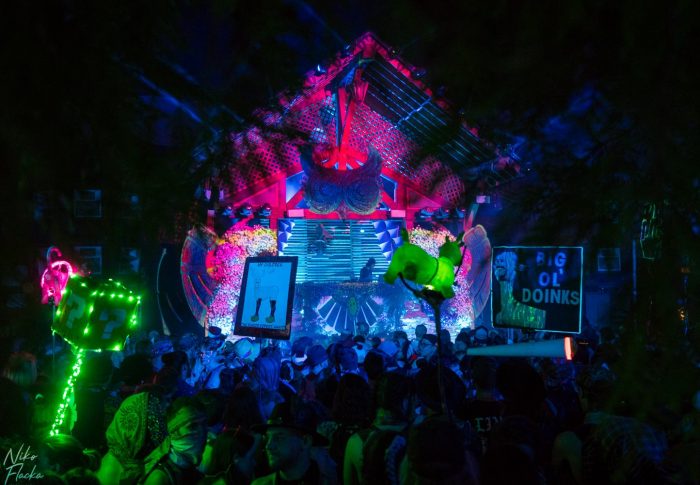 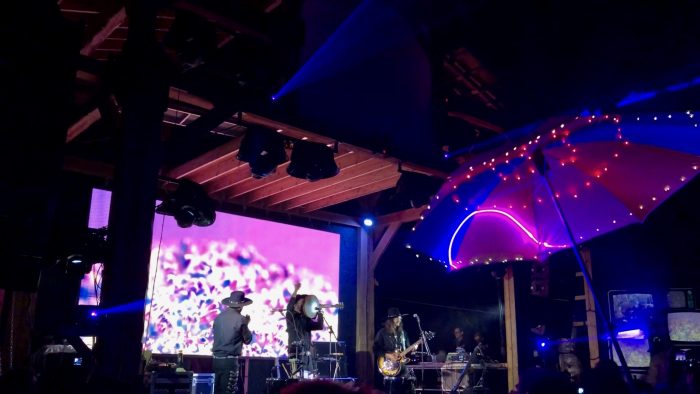 Dirtwire at The Living Room- Photo by Frankie Spinosi

Staged with staticky TVs, The Living Room was the place to relax and hear the occasional live set.

For an even more intimate and hypnotic set you could catch yourself at The Grove. Melodic styled bass and deep house swept across the air with magical sets by Goopsteppa, Christian Löffler, J:Kenzo, Kahn & Neek, to name a few.

The Cedar Lounge (also known as the chill stage) also featured a variety of downtempo electronica. During the day the lounge offered workshops, including talks on herbal medicine, dance, and yoga activities.

The Genuine foundation that Shambhala was built on will Perpetuate an everlasting music gathering. 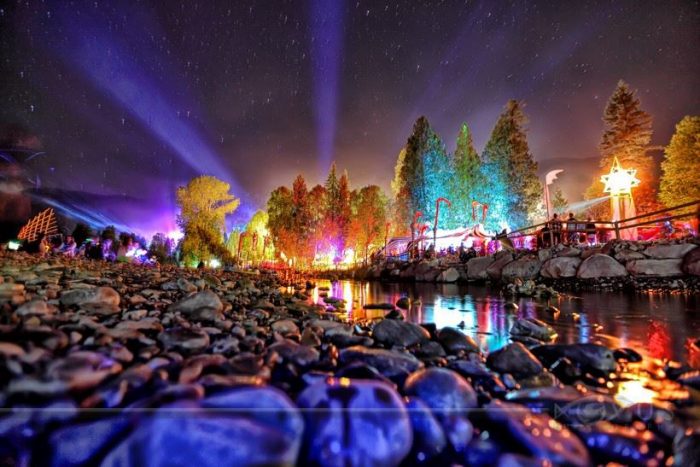 Shambhala is the Sanskrit term that means a place of peace and happiness.

In Tibetan Buddhism texts, Shambhala refers to a mythical kingdom that is secretly surrounded by a chain of snowy mountains. It’s an enlightened society, where war and inequality are unknown. 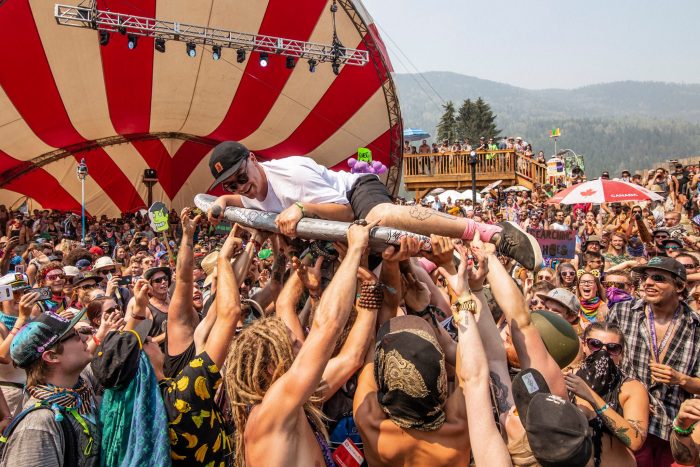 Shambhala is located on a 500-acre farm that houses many farm animals all year round. The flowing Salmo River and the Selkirk Mountains surround the land. Green furry pines encircle the permanent stage structures that remain standing year after year.

Shambhala has a sustaining mission to decline any corporate sponsorship. Not one advertisement or corporate logo will ever be spotted on the farm. As stated on the Shambhala website: “This allows the festival to retain a true reflection of the people on the dance floor and their vision of what their community looks like.” The festival’s genuineness is not only apparent but also infectious. Shambhala unites like-minded individuals with honest and good intentions for an enlightening experience.

Heart-warming attendees pumped a magical energy into the Air. 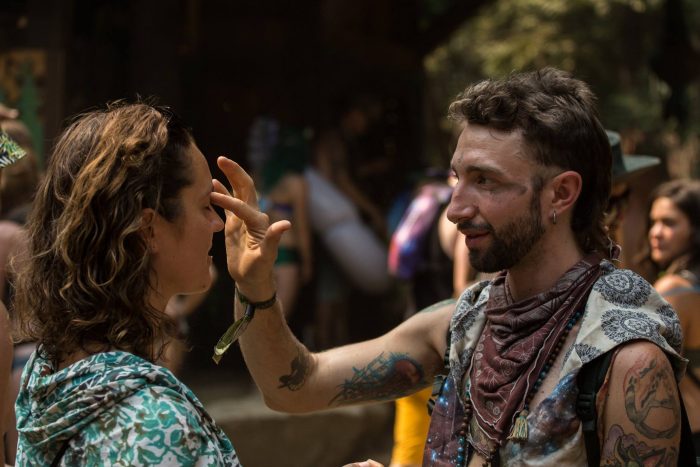 I arrived early Friday morning around 3:30 AM, when most of the camping spots were already taken. However, I was welcomed by the ‘Stranger Danger’ camp who offered my friend and I a place to build our tent. These by far were the friendliest strangers that I’d ever met – they even offered free candy! While on paper this might sound like a parent’s worst nightmare, the irony was a representation of their hospitality.

The camp had been running for 5 years, its intention to openly welcome newcomers and returning attendees to Shambhala. A place where strangers from anywhere in the world could gather and feel comfortable in a friendly community. Not only did I see this respect at the campsite- I saw it at the stages as well. As I mentioned earlier, the music was only half the experience. The attendees themselves really brought this festival to new heights. From the sharing and kindness to the LED lit costumes and outrageous totem poles, this group of festival goers all had one main intention: to make one another smile.

One small example of this intention presented itself to me on Saturday evening during Lady Waks’ set at Fractal Forest, when a girl randomly walked up and asked me to pick out of the ‘mystery box’. I reached my hand inside and pulled out a magic wand! Something so unexpected and purely imaginative left me blissfully amazed. There were also trading posts where you could trade anything from a trinket, to a flashlight to anything in between. Message boards were also set up in the downtown area where you could write friendly note to others. 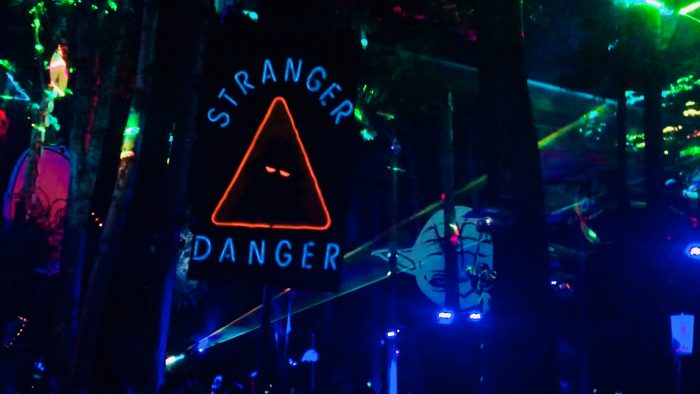 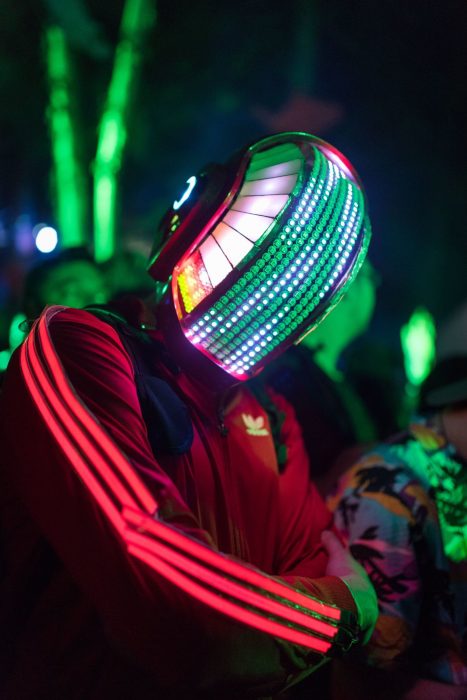 Shambhala Music Festival began in 1998 with only 500 attendees on the same grounds that it stands on today. By 2010, 15,000 artists and guests were arriving from around the globe to engage in a rich experience of nature and music. Shambhala is like no other festival. It’s genuineness and virtue have endured through the many years of its existence and will continue for many years to come.

*Written with support from Frankie Spinosi