Purple Hatter’s Ball was absolutely beautiful, and in a short sentence that’s about all that can be said. Beautiful people, an outstanding venue, and incredible music. What’s more to want?

Purple Hatter’s Ball is a music festival that is held at the Spirit of Suwannee Music Park in Live Oak, Florida, and it’s one of the top outdoor music venues in the United States.

Few places come close to the scenery at Suwannee (Red Rocks Amphitheatre and The Gorge immediately pop into mind), and the sun shining through the Spanish moss and Live Oak trees is a daily testament to that. It’s awesome.

Outside of the breathtaking grounds Purple Hatter’s played host to an absolutely killer lineup this year.

A scattering of today’s top musicians came out for the rocking shindig, and the festival impressed with flying colors. 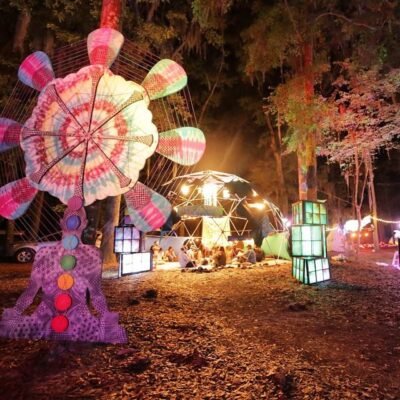 It was our first year of attendance at Purple Hatter’s Ball 2015, and we weren’t too sure what to expect. We’d heard that it’s a smaller event than the annual Wanee and Hulaween festivals held at Suwannee, but that’s about it. One can never get a true grasp on the situation at hand until arrival, so we kept an open mind and made it to the banks of the Suwannee to see what we were missing.

Off the bat, it was easy to draw parallels between Purple Hatter’s Ball and Aura Music & Arts Festival. Both are small-to-mid-size festivals, both in the same location, and both with a very similar vibe. If we had to guess we would say that Aura was the bigger of the two, especially with the stage production and Disco Biscuits’ light rig – but the feeling between the two festivals is quite similar.

In all honesty, it was everything that we were hoping it would be. A Random Rab/Alex Grey combo is about as psychedelic as one can get, and crowds stood in awe as the Grey’s returned to the stage for some live painting during Rab’s entrancing set.

Our math is correct, you want to see this. 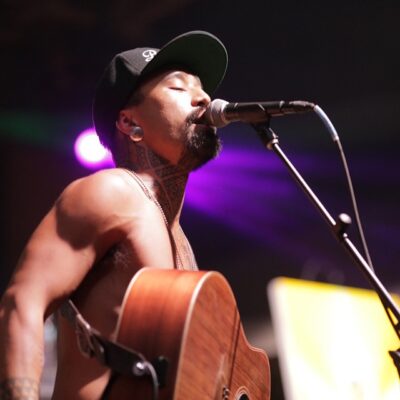 After Rab’s subdued set the campground waited for the one of the biggest names on the bill to take the stage: Nahko & Medicine for the People. Starting solo with just his voice and a keyboard, Nahko worked the audience into a frenzy as the band joined him on stage. Throwing down their one-of-a-kind blend of acoustic-folk-rock, Nahko & Medicine for the People had the crowd mesmerized. It would be one of the most talked about sets of the weekend.

After Nahko it was time for Ohio’s own, The Werks.

The Werks went on to impress as they always do, bringing out all stops on one of the biggest stages that we’ve ever seen them on outside of their own festival (The Werk Out). After their set, fans dispersed to roam through the campground or head to the silent disco – an excellent choice, no doubt. And with that, the night was over. On to the next one…

Saturday started with a sweltering southern heat that only Florida can bring, but that’s never a worry at Spirit of Suwannee because the Suwannee river runs through the festival grounds. That can only mean one thing, beach party, and not only are the banks of the Suwannee a great place to drink some suds in the sun and cool yourself off during the day, but Purple Hatter’s Ball had a surprise in store for the river’s sleepy banks. 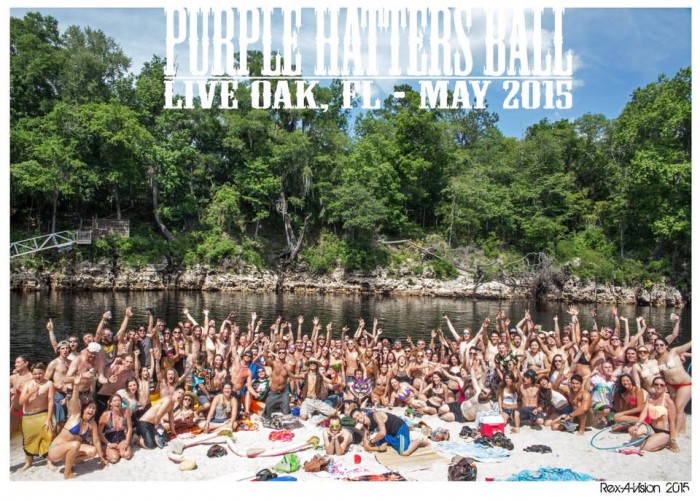 From noon to nearly 7 p.m. on Friday and Saturday, bands and DJs alternated to give life to the riverside party. We swam, we danced, we conversed, and we drank. We truly loved it.

As things worked their way up on Saturday, it looked like the frivolities had the potential to surpass the prior days of the festival – a steep order. From Toubab Krewe to Vlad the Inhaler, the midday scene was incredible.

At 6 p.m. on Saturday Mama Margie took the stage to speak heartfelt words about her daughter, Rachel. It brought everyone closer, coalescing in a moment of remembrance for the true reason of Purple Hatter’s Ball.

Purple Hatter’s is a celebration in remembrance of the life Rachel Morningstar Hoffman. 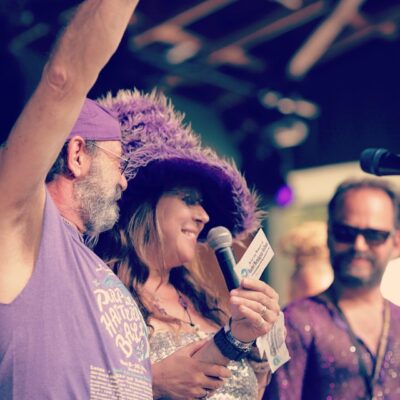 In a series of unfortunate events and avoidable mistakes, Rachel was murdered after being coerced into cooperating with a narcotics sting operation in North Florida.

As a result, Rachel’s Law was passed, requiring law enforcement agencies to provide special training for officers who recruit confidential informants, instruct informants that reduced sentences may not be provided in exchange for their work, and permit informants to request a lawyer if they want one. It’s a sad story, but remember that this event is a celebration of life and not a mourning of death.

When you really think about it, Rachel is the reason for the uncommon closeness that is felt among attendees at Purple Hatter’s Ball. Something special that brings us all together in sharing each other’s space and company. Someone special to helps us along the path to togetherness.

The sentiment rings true in our hearts.

After things got heavy with Mama Margie’s speech and the releasing of the Monarch butterflies, things returned to a lighter note. Back to the celebration of life and the sharing of the light.

Saturday night’s lineup read Dubconscious > Tauk (other choice: Supermande Jam)> Charles Bradley and His Extroardinaries > Parker Urban Band (other choice: Greenhouse Lounge) > Lotus > silent disco. In what can only be described as a dreamscape of a time each band absolutely tore down their respective time slots with energetic and soulful sets. 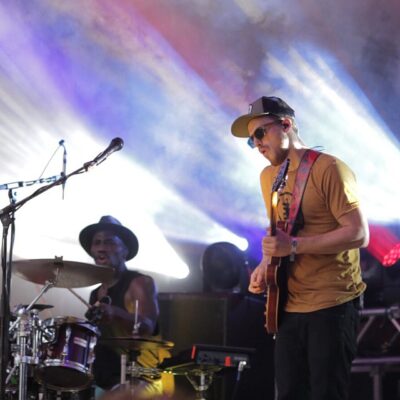 The highlights were the Parker Urban Band and their R&B/jazz/funk blend of sizzling grooves and Lotus with their funk laden dance tunes.

Regardless, everyone had us dancing, hard.

After Parker Urban Band’s surprising set was the famed Lotus, and crowds flocked in droves to the amphitheater to see the festival’s headliner take the stage.

Starting at an incendiary pace that never let up, Lotus took everyone in the campground for a ride throughout their jamming, deep set. Leaving the crowd tired, sweaty, and smiling – Lotus eventually retired from the stage.

Artists weaving note and beat alike to create a mystifying silent dance zone that only those in the know would believe.

It was incredible. If you’ve never been to a silent disco, put it on your bucket list. It’s one of those experiences that everyone deserves to try at least once. The shenanigan level is too high to pass up.

After some time in an around the disco, we slowly carried our exhausted souls back to camp; deeply tired and unbelievably satisfied.

Back to the festie circles that curl in between tents and bring conversations as filling as good meals and smiles that stretch ear to ear.

As the sun rose into Sunday and the world presented itself yet again in color, it was time to pack up and start the trip back home. For those who were without Monday responsibilities, Purple Hatter’s does still have music for attendees on Sundays. Tunes for the Sunday soul, we’re sure they were incredible.

Overall, our first experience at Purple Hatter’s Ball 2015 was one of elation and fondness. After attending festivals, gatherings, and events all over the country – there really is something in the air at Suwannee in early May that brings attendees closer together than at most events. The community that forms over those several days sticks with you, charging your soul and creating a glow that can be felt for days to come. We know that we’ll be back to the banks of the Suwannee for Purple Hatter’s Ball, and we hope that you will be too.

See you out there. 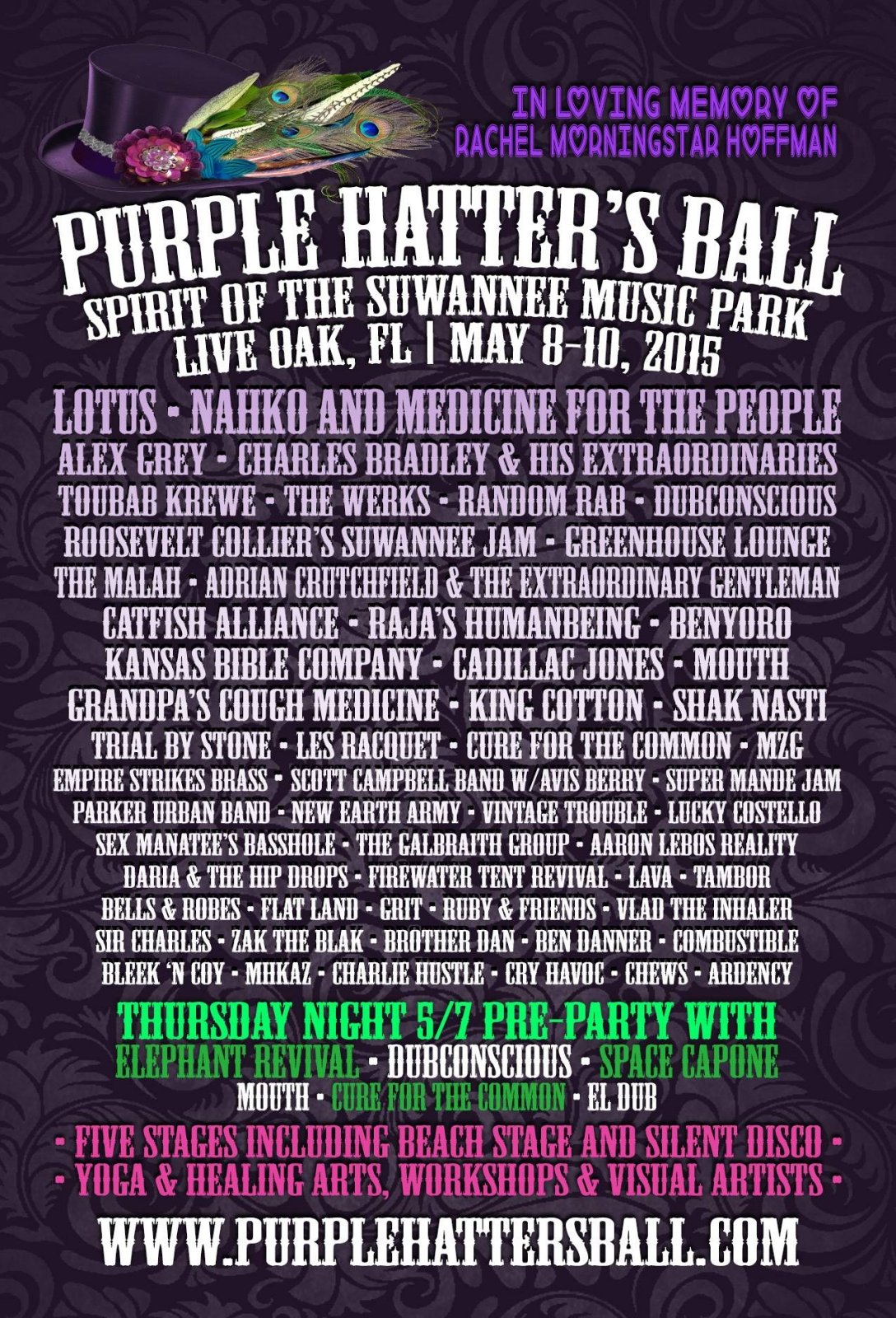