At Sonic Bloom, the Unified Field Theory is presented through mind expanding music, art, and visuals. What I took away from the presentation was that we are all connected and the world is our canvas. Each of us has our own craft tools to paint and impact our universe.

Crafts can consist of making music to help people explore emotions and move their bodies, communicating an impactful message, or painting to compose beautiful works of art that encourages original thought. Craft tools can come in all forms, tangible or intangible. We all have tremendous power to transform the world with the craft tools we decide to use.

Choose as many tools as you wish and go paint our universe a more colorful place.

Now enjoy this Phaeleh track as you take a photo tour of Sonic Bloom on the Hummingbird Ranch in Colorado: 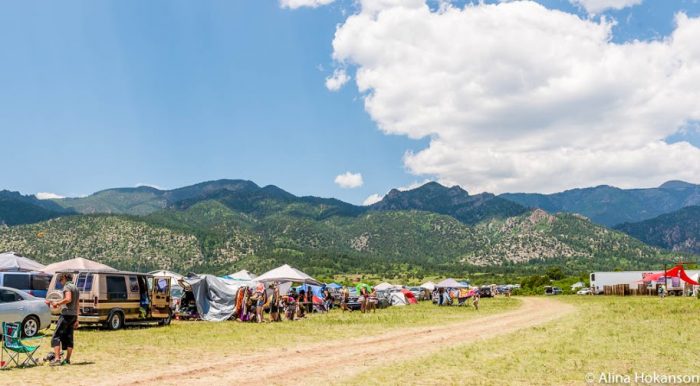 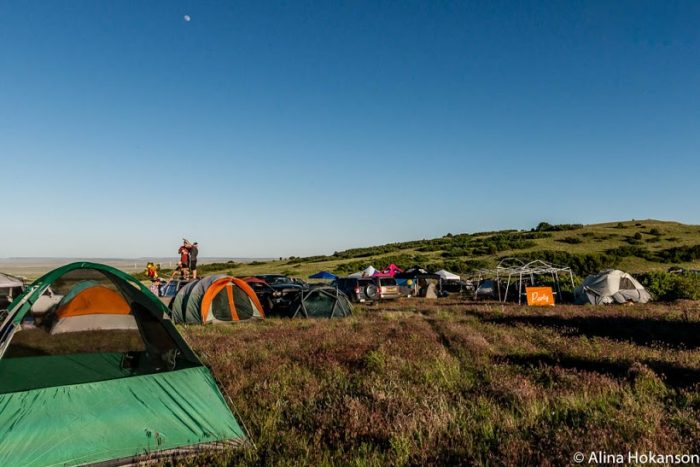 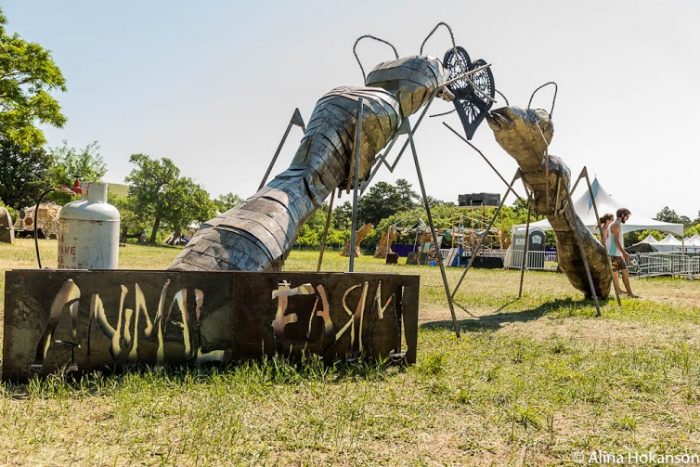 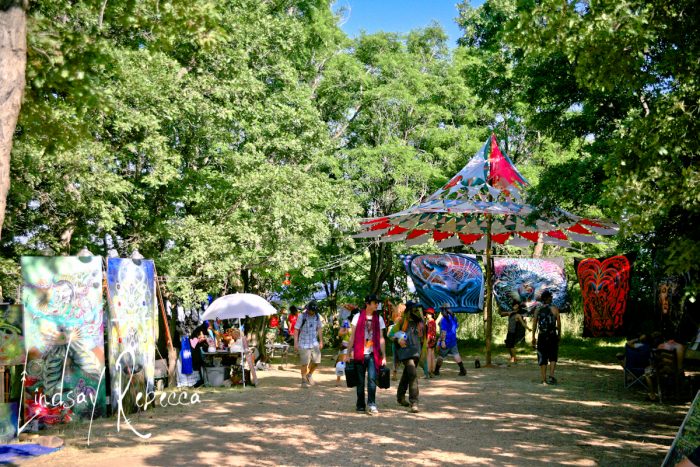 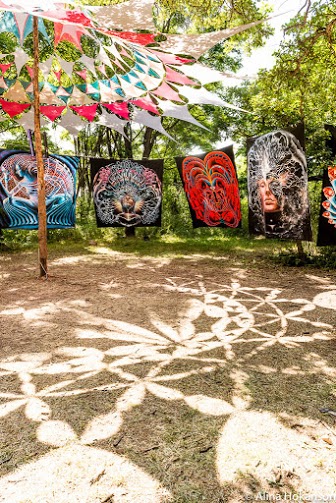 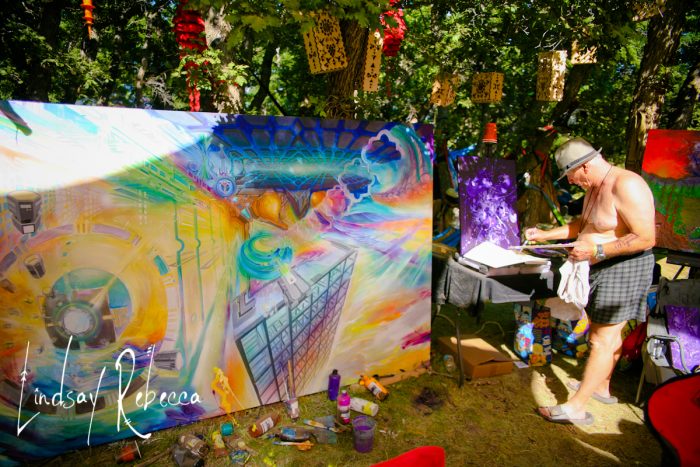 The creek is a great place for wook hunting. Sonic Bloom is the birth place of Colorado Big Game Trophy Wook Hunters. Come join the facebook group for endless laughs from stories about bagging and tagging wooks – entirely out of love of course! 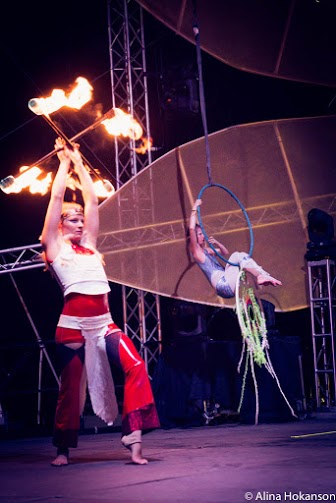 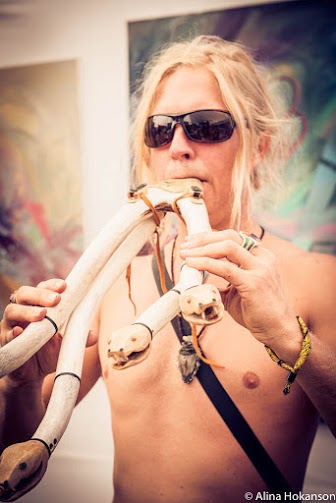 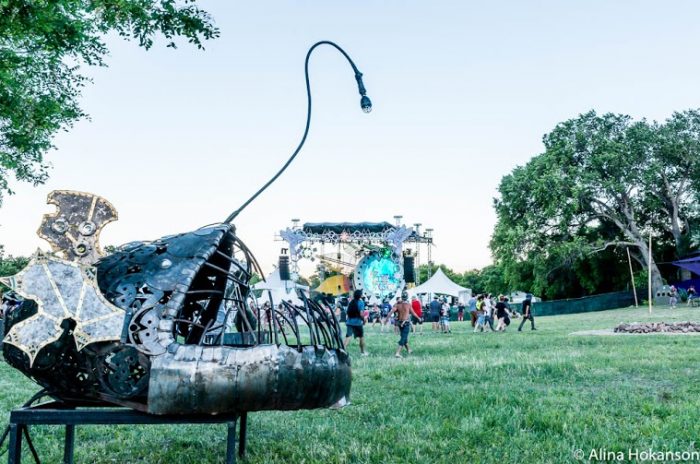 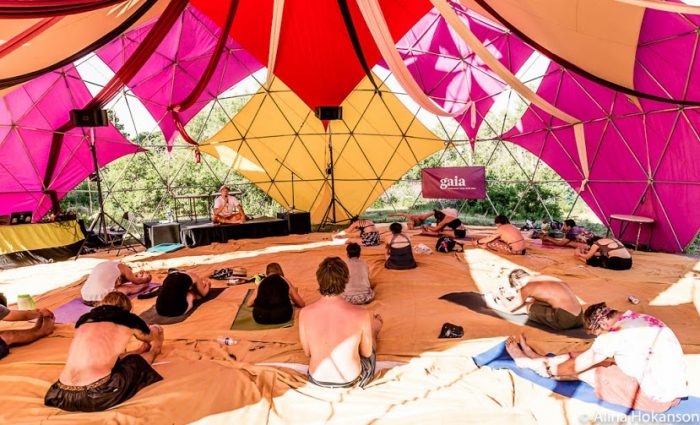 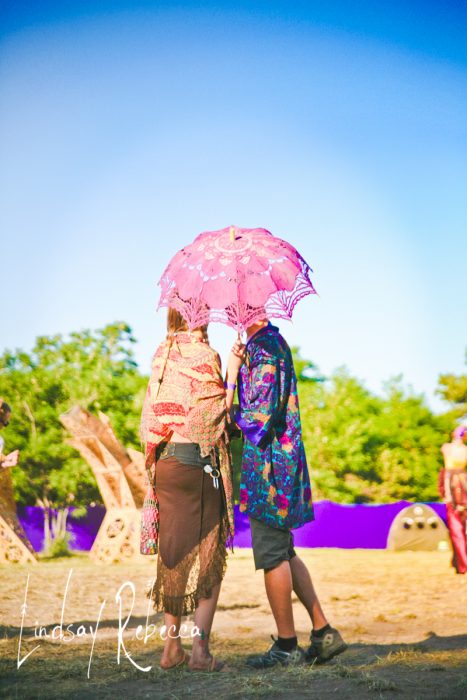 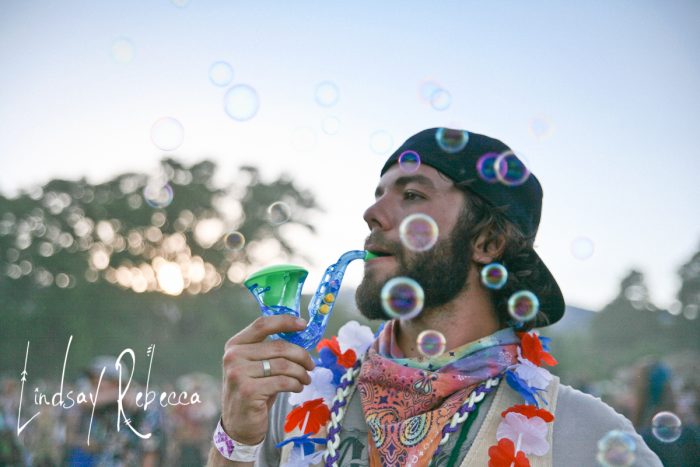 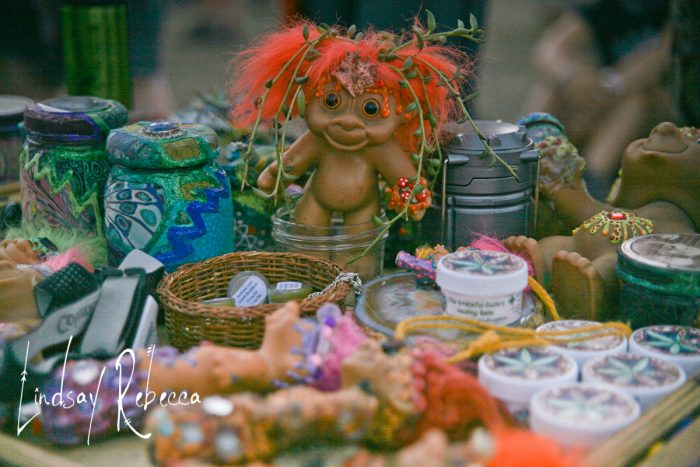 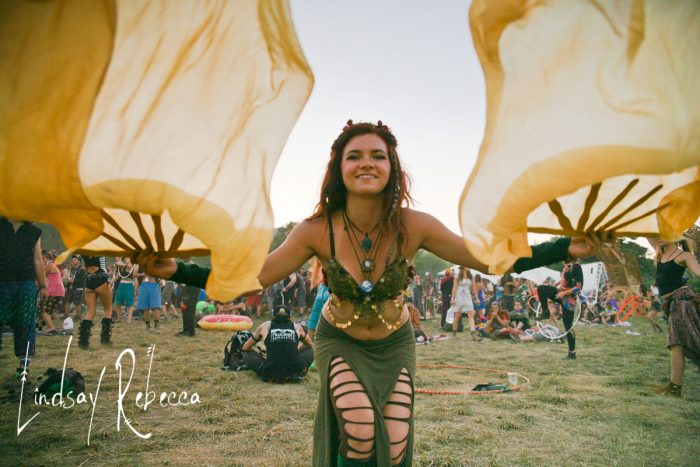 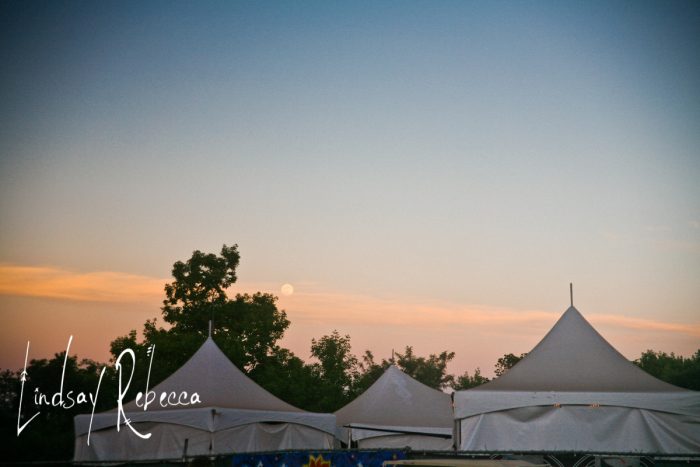 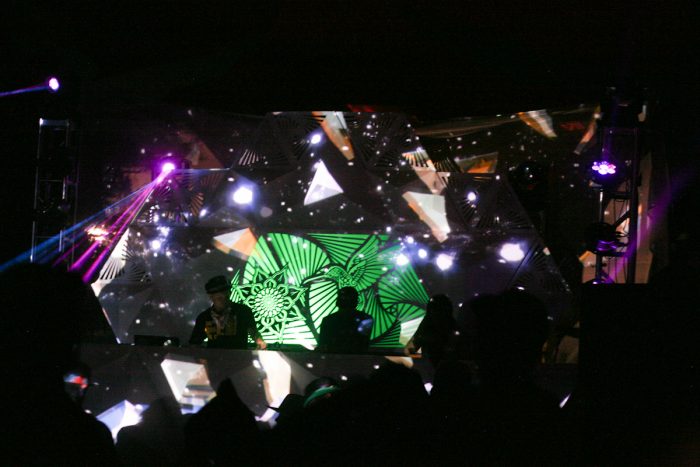 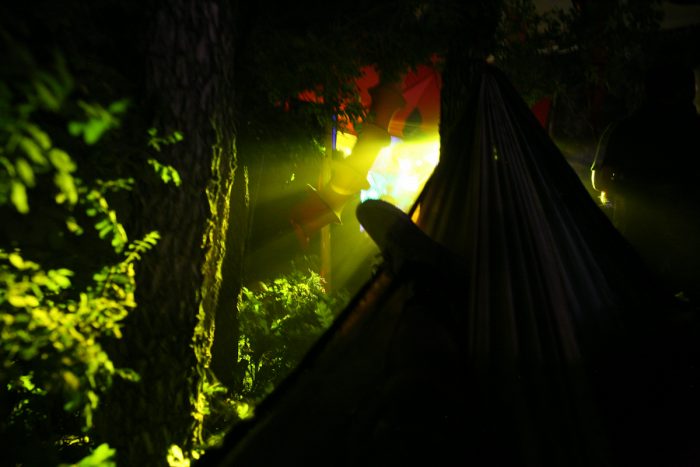 I got the honor to interview E.O.T.O., The Human Experience, Bass Physics, and Jantsen.

I spoke with Michael Travis of the String Cheese Incident after his DJ set  Saturday at the Hummingbird Stage. I asked him, “do you have any life hacks?” Travis says, “realizing our original predisposition is being comfortable, happy, thankful beings.

Knowing that’s true no matter what, then I can trick my brain by saying- right now you are going to that ultimate truth to turn off all concern for awhile.”

Then we went into a deep conversation about his influences, the galaxy, and love. Burning Man really opened his eyes to the electronic music scene, especially Shpongle’s album, “Tales of the Inexpressible.” About the universe, Michael says,”this is a huge galactic community with many many races and many many galaxies full of beings.”

On the subject of love Michael asserts, “Love is just one word in our language but actually love is an entire landscape of existence- if we can identify with that part of ourselves and let ourselves glow without concern then we can get closer to that kingdom.”

Make sure to look out for the Trancident– a rare trance set performed during Sonic Bloom 2015 by members of String Cheese Incident (Michael Travis, Michael Kane, Jason Hann, and Kyle Hollingsworth). It will happen again…

Then I spoke with Jason Hann of String Cheese, EOTO, and under the DJ moniker, Prophet Massive.

I asked him, “what makes you more comfortable on the road?” He pointed at his R2D2 suitcase and said, “this thing, because people always come up to me and say hi and are super friendly to me when they see this bag.”

EOTO was one of the original bands to perform at Sonic Bloom and once again they were headliners- always improvising.

Before the EOTO set Sunday, I caught David Block AKA The Human Experience behind the Bloom Stage. I asked him, “Do you have any life hacks?” Block said, “Smile, it will get you places.” That advice rings true to me now since both David Block and Michael Travis granted me with similar advice.

Block’s smile and music has definitely been taking him places. Lately he has performed at A-Fest in Greece and he is off to Bulgaria soon for a festival called Udaya. He will be sure to perform his annual set at Burning Man (click the link to view a neat Burning Man documentary).The Human Experience had an uplifting set on day-4. He launched a couple of new tracks he created while collaborating with Elephant Revival and Michael Travis.

Below is his track, ‘Oppression,‘ which inclined me to get out of my inflatable donut chair to start dancing under the 102 degree summer solace sun.

I met A.P. of Bass Physics as he was coming into the festival, so I asked him, “what’s one thing you love bringing to a festival that makes you feel at home on the road?” A.P. says, “My girlfriend and my sub-woofers are a must!” Bass Physics is a Denver favorite duo equipped with live keys and guitar. Catch this fun Bass Physics track, ‘Mind Activation.’

I also spoke with Colorado native, Jantsen,  before his set Sunday on “The Other Stage.” I asked him, “what do you like most about this festival?” Jantsen says, “the positive energy of his hometown- partying with all the homies.” Notably, he does a filthy remix of Bassnectar’s, “When the Beat Drops.”

Side note- “The Other Stage” was named after Denver’s local venue, “The Other Side”, which is managed by the Cervantes team who handled a lot of the logistics for the festival. Everything seemed to operated smoothly and safely.The hospitality at this festival is hard to find anywhere else.

Also, a HUGE shout out to Jamie Janover who harvested Sonic Bloom 11 years ago at the Mishawaka Amphitheater along the Poudre River in Ft. Collins, CO.  Thank you Jamie for making this world a more colorful and beautiful place. He also hosts workshops about the unified field and composes amazing music with Michael Travis and Arron Holstein of The Vibe Squad and under the moniker Zilla.

Night three was full of beautiful music. There was a small crisis when Ott canceled last minute, but Kalya Scintilla came in to save the evening (check out Scintilla’s full album HERE). Quixotic and Kalya Scintilla set the stage wonderfully for Tipper. We hope all is well Ott!

If you are looking for a crisp set then know Tipper will leave you feeling refreshed. The patience and precision David displays to combobulate beats is unworldly. Eat up this Tipper EP and make sure to catch him when he comes around your town. He is taking music to new levels.

Android Jones blessed us with his mesmerizing fractal visuals. Jone’s art was projected onto a HD screen that was placed at the bud of the Sonic Bloom flower-shaped main stage. The combination of the transformational music and art allowed us to drip into free flowing abstract thoughts and movements.

I felt the music at Sonic Bloom encouraged us to think in new ways.

I think the placement and order of the sounds that Tipper compiles can excite brain neurons in new ways that generates fresh and original thought. Also, I put two and two together, sound triggers memory. I can remember something better if there is music associated with it. I see good reason to explore that concept further to enhance our memory. Needless to say, I had a splendid time exploring my mind, body and spirit at this festival.

I hope to catch you blooming next year. I’ll be the guy going donutz.

Introspection from Duke Dumont at The Mission Ballroom