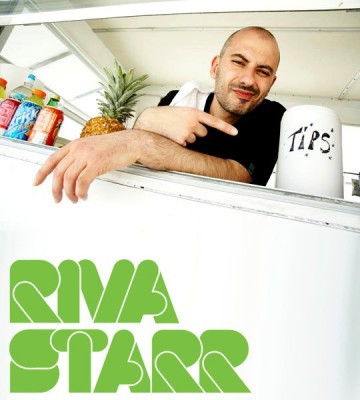 Backed by a veteran label seasoned at releasing house classics, Italian DJ/producer Riva Starr (Stefano Miele) is roping in some serious publicity with the popularity behind his new album, now out on Green Velvet’s Cajual Records, Definition Of Sound.  Just in time for Miami Music Week, this album is lined up to crank the party full of energy as Starr confesses that each song was inspired by a specific club experience.  He says that, when traveling, he uses his free time to write and compose new songs on his laptop and will take a closer look and finalize those tracks when he gets off the road and back home from traveling.

“All the tracks were born after great parties in the club.” -Riva Starr

As no newb in the electronic scene, Riva Starr has not only released two prior albums, but also serves as the owner and top dog of Snatch! Records.  Recognized for his idiosyncratic flavor and his eclectic skill, this man continues to produce a new and appealing sound far beyond its years.  Definition Of Sound is no different.

Through 11 hip-moving, dance floor-worthy tracks, we’re gifted with an album packed with a plethora of energetic crowd-pleasing jams.  From hard-hitting bass thumps to funky throwback feels and from melodic piano riffs to soul-filled vocals, Definition Of Sound delivers on a multitude of levels.  Serving as an extremely strategic release from Riva Starr, he explains the maddness:

“Starting from the title, I decided to give a clear idea of where my sound is at the moment as being eclectic can sometimes cause confusion in terms of identifying my sound. This album is to tell everyone what I stand for and what my sound is. With this album there’s definitely a more clubby approach than my last.”

Definition of Sound is now available for purchase on Beatport and Traxsource.

Listed below are six key players from full Definition Of Sound album: