As the upcoming November presidential election grows closer and large live events are still on hold, Lost Resort TV has put a new spin on the live streams that have kept so many electronic music fans sane while staying indoors the past few months.

Rave The Vote is a voter registration and fundraising digital event aimed to rally the dance music community around the pillars of change and unity. The series will broadcast exclusively on Twitch across four 12-hour episodes beginning July 24 with following events on August 14, September 11, and October 2, then after parties to boot. 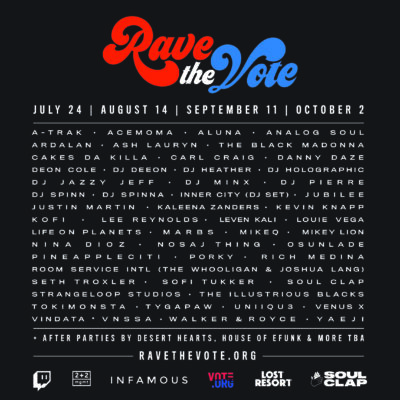 Rave The Vote’s lineup is a multi-genre billing that features some of the most credible names in electronic music and represents North America’s deep dance music and hip-hop roots. This includes veterans such as Carl Craig, DJ Jazzy Jeff, and Louie Vega to current favorites like Walker & Royce, Soul Clap, TOKiMONSTA, Justin Martin, Kevin Knapp, Ardalan, the entire Desert Hearts crew and many more.

The live streams will be intercut with political conversations and segments from Miss Barbie-Q, Recreation and Parks Commissioner of Los Angeles and Chief Strategist of CicLAvia Tafarai Bayne, Executive Director of the Freelancer’s Union Rafael Espinal and Chair of the Los Angeles Democratic Party Mark Gonzales.

Since its inception, the dance music community has been defined by positivity, inclusivity, and unity. Join Rave The Vote as we push our collective message beyond the tenants of hedonism and create a world worth celebrating.

Head to Rave The Vote’s website to RSVP to the event, register to vote, check registration status, or request an absentee ballot.