Side Project, Kx5 Broke Records for Largest Dance Music Set Ever in America

Kaskade and deadmau5’s side project, Kx5 took over the Los Angeles Memorial Coliseum, breaking records for the largest single-day concert event headlined by an electronic music artist in North America according to Pollstar and Billboard confirmed that Kx5 at the Coliseum was the biggest ticketed global headliner dance event of 2022 with 50,000 fans accounted for the project’s debut set.

The GRAMMY-nominated artists, Kaskade and deadmau5 gained momentum for this historic night during their surprise B2B set at the first public concert performed at Los Angeles’ SoFi Stadium in 2021, plus the project’s debut single, ‘Escape’, featuring Hayla as well as hot recent Kx5 releases and other radiant collaborations over the past decade. Starting in 2008, Kaskade and deadmau5 have been studio mates, initially producing two singles that hit 1 on Billboard’s Dance/Mix Show Airplay chart ‘I Remember‘ and ‘Move For Me‘, then in 2016 another smash, ‘Beneath with Me‘ featuring Skylar Grey.

For the December 10th milestone presented by Insomniac, the two-plus hour set was highlighted by Kx5 latest productions out now on mau5trap/Arkade including ‘When I Talk‘ with Elderbrook, ‘Avalanche‘ ft. James French, ‘Take Me High‘ and ‘Alive‘ featuring The Moth and The Flame (TMTF) as well as unreleased material. 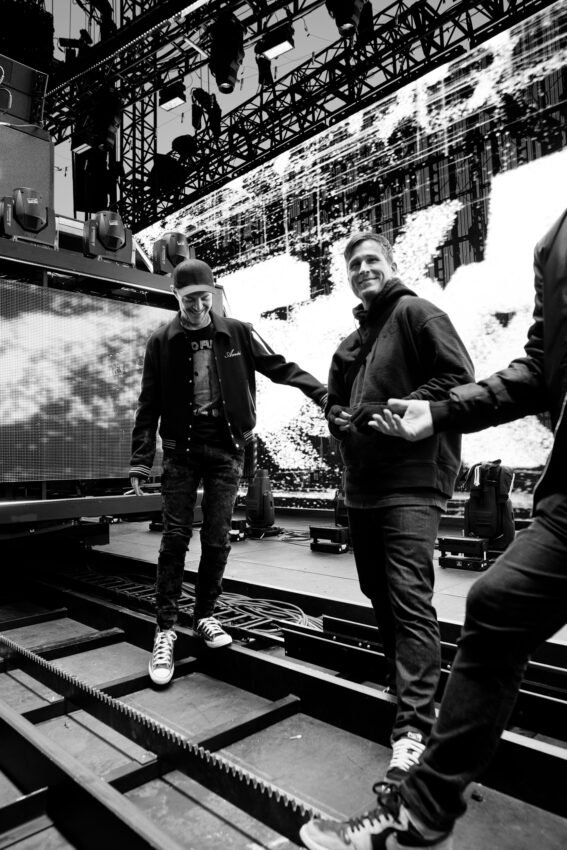 These songs and more were intertwined with special edits of each artist’s favorite selections including Kaskade’s newest ‘Dance With Me‘ with Justus, plus fan favorites ‘Disarm You’ and his collaboration with Skylar Grey ‘Room For Happiness’ that had people catching the feels, eyes closed – hearts open. deadmau5 whipped out classics ‘The Veldt‘, ‘Ghosts N Stuff‘ and the song that introduced Kaskade to mau5 ‘Faxing Berlin‘, which created a wild dichotomy to the night.

The two artists closed the show with a surprise appearance from Hayla to perform their Top40 radio smash ‘Escape‘.  The overall vibe was progressive and driving, while souring vocals emerged making it a holiday-spirited night for the whole rave family.

This record-breaking set can be remember into our old ages thanks to Rave Tapes‘ live stream and you can peep the set list at the end of this article.

Over the course of the set, deadmau5 (Joel Zimmerman) and Kaskade (Ryan Raddon) performed on pods that rotated and moved across the stage while fireworks and flames burst overhead. Dazzling crowds, 300 drones flew high above the Coliseum’s iconic torch and supporting arches creating unique formations including a configuration of the state of California and flashing words “Welcome LA,” and song titles “Alive” and “Escape.”

More studio releases from Kx5 can be excepted in the coming months leading into an album in 2023. To catch Kx5’s next outing you head to Ultra Music Festival in Miami March 2023.

Discover more about the origins of Kx5 and get to know Joel and Ryan earnestly through their recent interview on DJ Snipers’, “The 20 Podcast” on beatsource.

Helping set the record breaking night was Chicago’s John Summit, a top-selling artist across all genres on Beatport in 2021 and US Dance radio chart-topper with his record ‘Human’. In 2022, John Summit has grown accustomed to massive crowds while performing at CRSSD, Ultra, EDC Las Vegas and Orlando, among other packed club sets across the world.

John’s latest releases ‘What a Life’ and ‘Show Me’ surfaced on his new imprint Off The Grid, while over the course of the year Summit has garnered 172.5 million streams, across 23.1 million listeners.

The triumphant live show from Kx5 has them joining a significant roster of musical acts to have headlined the Coliseum including the Rolling Stones, Pink Floyd, U2, Metallica and Prince just to name a few. The show was a prestigious honor as part of the “Coliseum Forever” event series celebrating the 100th anniversary of the venue.

Known as “The Greatest Stadium in the World,” the Los Angeles Memorial Coliseum, a living memorial to all who served in the U.S. Armed Forces during World War I, has been a civic treasure for generations of Angelenos. Named a national and California Historic Landmark in 1984, the legacy of events and individuals hosted in nine-plus-decades reads like no other: the only venue to host two Summer Olympics (Xth Olympiad in 1932, XXIIIrd Olympiad in 1984) and soon a third (XXXIVth Olympiad in 2028); home to college football’s USC Trojans since 1923 and the UCLA Bruins (1928-1981); professional football’s Los Angeles Rams (1946-1979 and 2016-2019), Raiders (1982-1994) and Chargers (1960); hosting three NFL Championships and two Super Bowls; home to the Los Angeles Dodgers (1958-1960) and the 1959 World Series; appearances by U.S. Presidents Franklin D Roosevelt, Dwight Eisenhower, John F. Kennedy, Lyndon Johnson, Richard Nixon, and Ronald Reagan; and international dignitaries such as Martin Luther King, Jr., Cesar Chavez, Pope John Paul II, the Dalai Lama, and Nelson Mandela.