thatDROP is pleased to present the promising up-and-coming DJ/ Producer, Hiding In Headstones. The well-connected artist has already been knee deep in the industry for a number of years, working in artist management, a booking agency and A&R for a popular UK based record label. After 6 years of incubating, Hiding In Headstones has just hatched his debut single, ‘Day Zero’, an exotic trap banger with eligance. 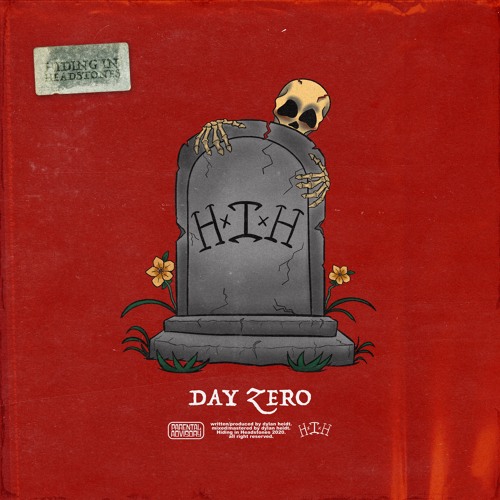 Hiding In Headstones found a love for music at the age of 15 when he started attending local concerts in his home town of Minneapolis. From an early age, he excelled at playing multiple instruments and showed a ton of potential for a life in music. In his late teens Dylan H. put out a couple of solid singles and was offered a deal from the reputable German based, Catchfire Records, but respectfully declined. From there he went on to tour as a DJ and guitarist for an artist by the name Dylan Reese.

Now is the time for his solo project. With clean production and deep sound ‘Day Zero’ undoubtly showcases HIH’s potential. We are excited to share more of Hiding in Headstones’ story through a fruitful interview where we touch on his music, tips for rising artists and learn about the A&R and booking side of the music business.

Im sure you learned a lot coming up in an A&R position before debuting a project of your own. When did you know it was time to start HIH?

Absolutely, without a doubt. It was interesting working in an A&R position within Dance music, because there are some major differences (based upon my experiences) between what exactly the job of an A&R entails when you look at Dance music specifically and then compare that to the role an A&R plays in just about any other genre of music. That being said, I think that it’s important for people to keep in mind that I was a musician, producer and mix engineer long before I was ever given the opportunity to work on the more business-minded side of the music industry and I’ll always consider myself a musician and a fan of good music before anything else.

The idea to launch the Hiding In Headstones project was an idea that had been brewing in my mind for about two years before I decided to actually pull the trigger on it and start releasing some music of my own. At the time that I had the idea for the Hiding In Headstones project, I was working on and committed to so much music that wasn’t my own…whether it be as a producer, mix engineer, or guitarist…I knew that I needed to finish those projects, or at least dwindle them down as much as I possibly could before I decided to jump into this new solo project on my own again. Around August of this year (2020), I felt like I was in a good place to officially announce the Hiding In Headstones project and set a release date for my first single and timing-wise I don’t think it could have worked out any better.

What were some valuable lessons about production and on the A&R side of things you learned along the way?

As far as production goes, I’ve always been a fan of the less is more ethos…but that doesn’t always translate well within Dance music specifically haha, so nowadays I mainly just try not to overthink what I’m doing when I’m working on a record of my own. If it sounds good, it sounds good…there’s no need to constantly put whatever you’re working on under a microscope and overanalyze it to the point that it turns you into your own worst critic and you never end up releasing any of the music that you’ve spent so much time and effort working on. On the A&R side of things the most valuable lesson that I learned was that you can’t be afraid to take a risk on an artist if what they’re doing is something that resonates deeply with you, or creates some feeling of emotion inside of you…even if you know that what they’re doing musically isn’t exactly what’s popular/trendy at the current moment in time.

What intentions did you put into ‘Day Zero’?

Going into the release of ‘Day Zero’ I knew that it had been nearly six years since I released any music of my own and I wanted to come out of the gate with a record that I felt was strong enough to show people that I had made some great improvements in certain areas of my production ability, but also remain true to the genres of Dance music that I had previously worked in and love so much. At the end of the day, I just wanted ‘Day Zero’ to be a powerful release for me make my return with.

Can you elaborate on the different layers of the beat for ‘Day Zero’?

I would love to and I’ll start off by saying that Day Zero was an incredibly time-consuming piece of music to write, mix and master haha. There are 60+ tracks in the session itself and what’s crazy is that a lot of those tracks are just ambient texture pieces in the background that I’m assuming the average listener probably wouldn’t even hear/pick up on if I didn’t go through and point them out in certain areas of the song, but without those layers the song itself would sound incredibly bare and entirely unlistenable. Other than that I feel like there isn’t anything incredibly crazy going on, or at least nothing that’s too far out of the norm. I’ve got some simple piano plucks with bells layered over them in there, chords on a stock piano plug-in, some 808 bass lines, vocal chops and then the lead synth layers, which actually do have quite a bit of plug-in, EQ and automation work going on with them throughout the course of the song.

If you were to play a late night set, what are 5 tracks you would likely mix in?

To be completely honest with you, I don’t know if I can throw out five off of the top of my head, but I know that there would be a ton of House music in there haha. Contrary to the direction I’m moving in with the Hiding In Headstones releases, I’m a huge fan of artists like Dombresky, BIJOU, Malaa, etc… When I find myself listening to Dance music in my free time it’s almost always some form of house music.

What are some tips for rising artists looking to get their foot in the door?

I think the most important thing for any rising artist that wants to get their foot in the door to do is to create/have some sort of team around them of like-minded individuals that are working towards a goal of their own, but that also want to see you succeed as much as they want to see themselves succeed. Another thing that I’ve found extremely helpful throughout my time working in music is to just be a normal, level-headed, decent human being…which in this industry, as we’ve seen, is not always the easiest thing to do apparently. Lastly, if you’re serious about what you’re doing, I think at some point you have to realize that you need to treat it like it’s already your full-time job, because somewhere down the road it will be if things work out the way you want them to and having routines in place that mitigate the possibility of you developing a feeling of complacency is essential. In short, know when to celebrate your wins, but never lose that hunger for more.

Can you explain a little about the responsibilities of a booking agency? What artists have you worked with? What is the process of getting an artist booked?

For sure! When it comes to booking a show, we handle everything from making initial contact with a promoter/talent buyer to setting up flights with said promoter/talent buyer for our artist and ensuring that our artist has accommodations and ground transportation in place when they touch down in whatever city, state, or country they’re going to. Even more so behind the scenes than that, which is where I spend a lot of time, we also actively gather information for different promoters/talent buyers around the world and log them in our database, so that we know who we’ve worked with, who not to bother when they’re busy, etc. Again, there is still an active non-disclosure agreement in place between myself and the agency that I work with, so I’m going to try not to incriminate myself too much here and name the names of artists that I have/and currently still do work with.

Any mixes in the works? What is next for HIH?

I don’t have any mixes in the works currently, but I plan to get some out after the new year and throughout the course of 2021. At the moment I’m just trying to finish up a bunch of singles that will come out under the Hiding In Headstones name in the near future and really establish a name for myself in Dance music scene as best I can. As I type this, I see that ‘Day Zero’ broke 3,500 streams on Spotify today and considering that I didn’t have much in terms of expectations for this first release, I feel pretty good about that and what the future holds for this project.