Gary Richards doesn’t mess around when it comes to acquiring top-notch talent for his events. Consistently, year after year he manages to knock my socks off with one expertly curated lineup after the next. Led by HARD Events founder Gary Richards, aka Destructo, the LA-based event brand found itself in 2007 when they initially started their iconic two-day affair, HARD Summer.

For this year, the festival returns to The Speedway in Fontana Southern California, Saturday and Sunday August 5th – 6th. Below is the full list of 100+ artists set to sweat it out with you, as you get down and dirty. 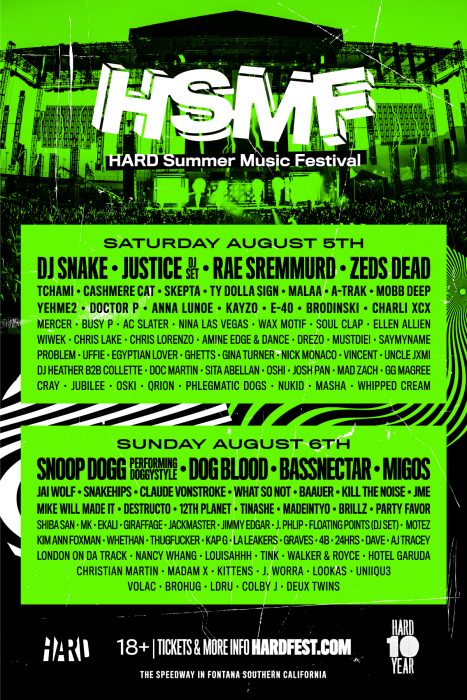 Now we need take a minute to talk about how incredible this lineup is. As a writer, I take notes on lineups, dissecting them piece-by-piece before composing articles on them. I started to write down artists that I would be EXTRA stoked on seeing this year. I got halfway through the day 1 lineup, realizing I had written down almost every artist’s name from this lineup, that is easily one of the best lineups of the year.

HARD Events Never Disappoints When They Drop That Lineup

Gary Richards has called in all his homies for this year’s summer affair. One thing that sets HARD Events apart from other massive festival producers is the eclectic music taste represented by consistently stacked lineups. His roots were with hip-hop, and he always stays true to that by ensuring there are some hot rap artists on the lineup each year.

Listen to DJ Snake’s ‘The Half’ to get pumped for Day 1:

Boys Noize and Skrillex will be reigniting their famed duo Dog Blood for the first time in years.

Along their side will be Bassnectar and Migos who will also headline day 2. Other noteworthy acts include Jai Wolf, Kayzo, Cashmere Cat, Malaa, A-Trak, Kill The Noise, What So Not, Claude VonStroke, Snakehips, Brillz, Party Favor and the multi-talented HARD Events founder himself DESTRUCTO.

Tickets for HARD Summer 2017 go on sale April 28th this Friday, with prices starting at just $129. You can expect tickets to go flying as soon their released with a lineup like this, as well as some major lag from heavy internet traffic. Car & RV camping passes will also be made available at that time for those planning to stay on festival grounds.